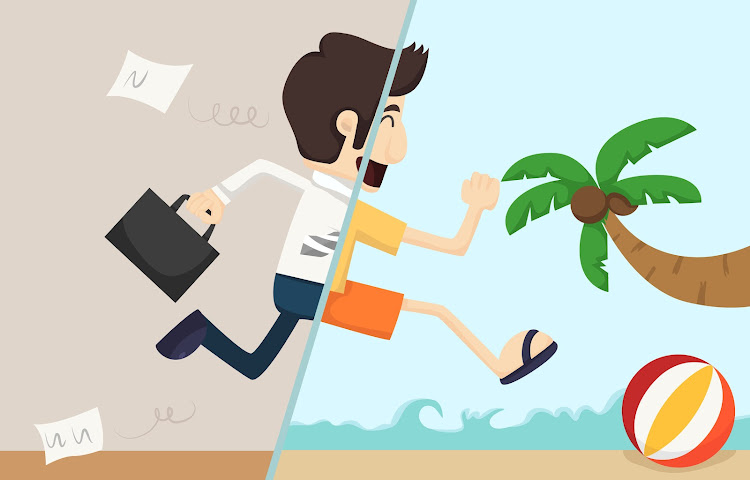 As long ago as 2010, an innocent time when borders were open and pandemics were the subject of TED talks rather than daily headlines, Dutch researchers discovered that most people who go on holiday trips are no happier when they return. Americans, notorious for their workaholism, were said to be particularly stressed-out vacationers.

Some of that has to do with working extra hard before the break to be able to take it, then extra hard afterwards to catch up, and worrying in between what’s happening in your inbox.

But it also has to do with planning the trip, and fretting about things going wrong. Expectations are high, especially in the era of social media, where we are constantly gazing at selfies of toes on beaches. So you’ve got to book ahead — not just the hotel but also the surf or ski instructor and of course the only restaurant your guidebook deems acceptable. Deep down, you know you’re just asking for disappointment.

Then Covid-19 showed up. Where I live, we went into the first lockdown in March 2020. From a holiday-budgeting point of view, the immediate effect was that our hefty deposit for one booking went down the drain. Optimistically, my wife still kept a reservation for Christmas open, until that too was cancelled. By that time, everybody had realised that planning was, at least temporarily, a thing of the past.

Children are not eligible for Covid-19 vaccines, but high-end travel companies have introduced themed getaways for families
Life
1 year ago

Was that, paradoxically, a good thing for our holidays — or staycations? For planning curmudgeons like me, yes. The pressure was off to indulge in exotic and photogenic delights. Dusting off some old board games, I felt we finally had “permission” to enjoy simpler pleasures — spontaneously.

First for my kids and wife and eventually even for me, however, the thrill wore off. It’s hard to be spontaneous during lockdowns and social distancing when there is no friend beyond the household to be spontaneous with, nor any venue to do it in.

By the spring of 2021, a new and better summer season beckoned, with promises of Freedom Days in some places and at least somewhat laxer restrictions in others. A lot of us adults are finally vaccinated and have QR codes to prove it. Most children are not, but getting them tested has become easier. With only one abstention (go ahead and guess), our family decision was unanimous: we needed to get away.

So our designated planner (my wife) worked feverishly to arrange a trip. Portugal appeared to be open for business — until it wasn’t, though it might have changed status again since you last hit the refresh button. Greece is available, though its main party island, Mykonos, just had an outbreak and announced a curfew, maybe with more to come.

At some point, every European country seemed to be doing its own thing, some keeping people out, others requiring quarantine exactly as long as the average holiday, and others yet welcoming everybody with proof of vaccination, negative tests or past infection. Helpfully, the EU has tried to organise this information on a web page, where you can even toggle bilateral country combinations and permutations.

As to more exotic destinations, from non-EU Britain to the Americas and beyond, we stopped googling when we could not even agree how to keep track of the various regulations and updates — by spreadsheet, white board, pen and paper? Flying was basically out, our family planner decreed. So were trains and other crowded conveyances. As was crossing borders.

That left the car and domestic excursions. We smiled politely as we bid farewell to our friends with cabins, dachas, country houses and the like — what a great investment those must be turning out to be. Then we joined the entire rest of the population and went online to hunt for a driving-distance holiday rental.

After a few weeks of searching so stressful that it will take several holidays to recover, a miracle occurred. We found something: a thatched-roof house on an island in the North Sea. Off we were to the next stage: packing and planning.

Being registered by our smartphone maker in the US rather than Germany (don’t ask), we were unable to download the ballyhooed apps the EU is hawking as “digital Covid certificates”. So I (this sort of thing falls to dad) photocopied QR codes, laminated papers and uploaded scans to Dropbox just in case.

For the unvaccinated kids, the regulations were more complex. The rental company and other vendors on the island required a strict schedule of tests. Overenthusiastic, we had their noses swabbed one day too early, and got an earful for it on arrival. Then we tested them every couple of days, building our beach routine around these errands.

The restaurants were booked out, though we got a table on the last night — outdoors, of course. Throughout, wherever we went, we checked in and out with a tracing app. Never have my whereabouts been documented so thoroughly.

Since you’re asking, yes, it was worth it, especially for the family. But I’ll admit that I returned somewhat stressed and exhausted from all the paperwork and forms. Fortunately, I’ve been back at work this week, and am starting to recover.

• Andreas Kluth is a columnist for Bloomberg Opinion. He was previously editor in chief of Handelsblatt Global and a writer for the Economist. He's the author of ‘Hannibal and Me’.