Lamborghini has released this teaser picture of a low-slung car under a cover. Picture: SUPPLIED

The Countach has adorned the walls of countless teenage bedrooms, and the poster child of Lamborghini is set to make a return.

“Future is our legacy. And the new Lamborghini Countach is coming. Stay tuned…”

With this one-liner and a short teaser video, the Italian carmaker confirmed this week that a new version of its cult supercar is on the way — almost 50 years after the launch of the original.

No other details have been revealed, and all we have to go on is this picture of a low-slung, wedge-shaped car under a cover. However, it is thought that the car may use the hybrid petrol-electric powertrain from the limited-edition Lamborghini Sián hypercar, mating a 6.5l V12 engine with a supercapacitor for a combined output of 602kW.

Reviving a name as famous as the Countach will require something special from the Italian firm. Even for a carmaker that routinely churns out beautiful sports cars, Marcello Gandini’s design stands out from the others. 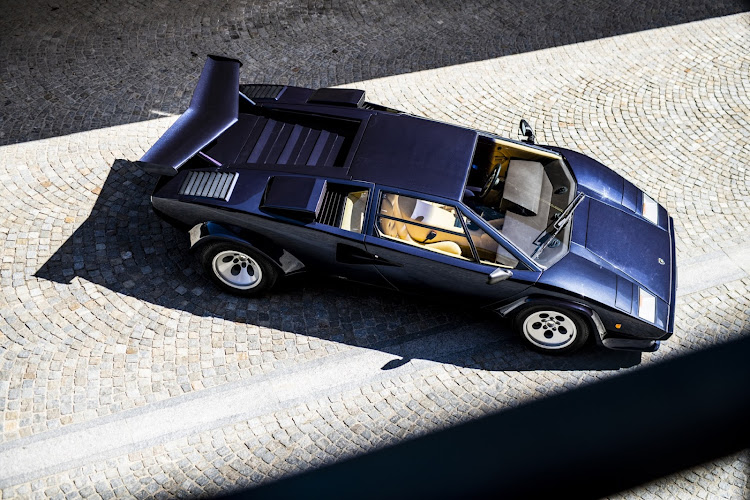 The original Countach was way ahead of its time. Can the new version make the same impact? Picture: SUPPLIED

Unveiled at the 1973 Geneva motor show, the Countach LP400 stunned the motoring world with its futuristic styling and scissor doors. Gandini, head of design at styling house Bertone, penned a wedge shape and sharp geometric lines that looked otherworldly. He created the design in an era when the stylistic and technical freedom of designers was all but absolute, with very few regulatory and statutory restrictions.

Its name was well chosen: Countach is an expression of astonishment in the Italian dialect Piedmontese.

The Countach was cramped and had almost no rearward vision through its tiny back window, but its flamboyant design trumped such practicality foibles and ensured its place in the pantheon of classic supercars.

The performance lived up to the styling too. The Countach LP 400 made its debut with a 4l engine but grew in cubic capacity and power in later iterations, culminating in the Quattrovalvole 5.2l V12 version which was capable of 298km/h.

The Countach was produced from 1974 to 1990 and was replaced by the Diablo.

This 602kW Lamborghini is quite electrifying

Ferrari's new 296 GTB is equipped with a hybrid technology system that's kinder to the environment while it maintains the high-performance legacy of ...
Life
2 months ago
Next Article