NEWS ANALYSIS: Naspers’s value plunged in 2021 due to China crackdown 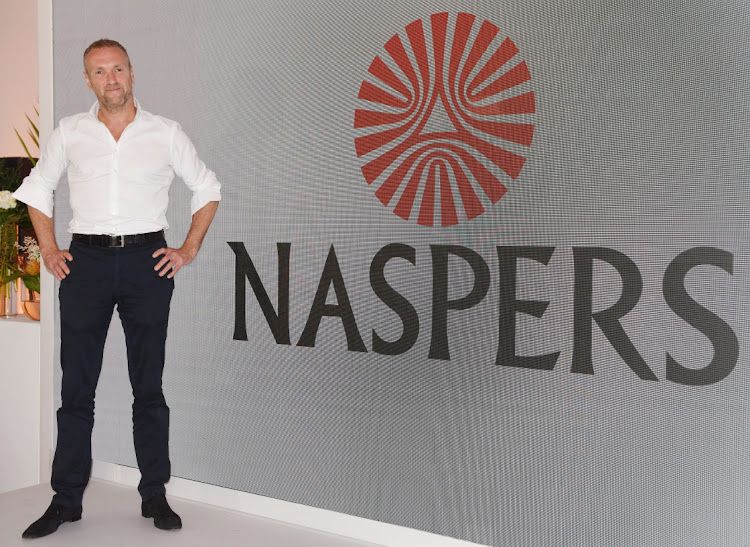 Naspers, which is likely to be the largest local victim of China’s crackdown on technology companies, fell 18% last year, its biggest single-year drop in more than a decade and a half.

Valued at more than R3.6-trillion combined, Naspers and its international subsidiary Prosus are the most valuable group on the JSE. Most of this value comprises Prosus’s 29% holding in Chinese internet giant Tencent worth $159.2bn (R2.48-trillion).

With so much value derived from the WeChat owner — an issue that has plagued the company for a number of years as it indicates that investors ascribe little value to the rest of its portfolio, estimated to be worth about R50bn — much of its share price movements are correlated with Tencent’s showing.

Naspers’s value dropped almost a fifth in 2021, wiping off more than R200bn as investors continue to worry about the safety of their capital in the Asian country amid a crackdown on technology companies.

The group, headed by Bob van Dijk, has been among the most high-profile casualties since China started cracking down on technology companies at end-2020. The crackdown also led to the cancellation of the $37bn listing of Ant Group. 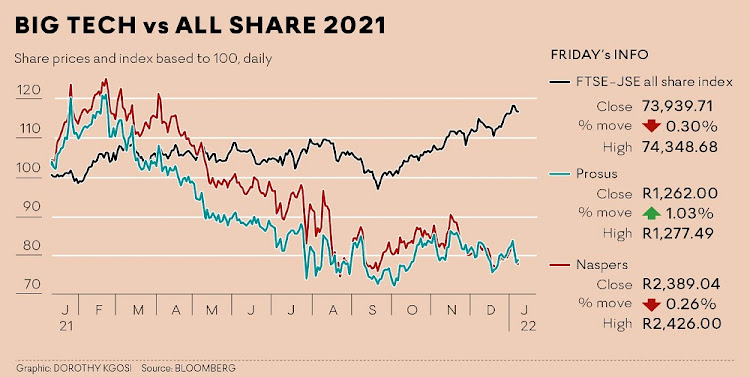 Chinese competition authorities ordered Tencent — in which Naspers is the largest shareholder — to stop exclusive music licensing deals and levied a small fine after taking similar action against other tech firms.

Naspers and Prosus fell about 18% in 2021, wiping more than R700bn off their combined value. In the same period, Tencent lost 19%.

Anchor Capital’s David Gibb noted that “for Prosus and Naspers shareholders it has been anything but a smooth ride in 2021”.

“The Chinese regulatory storm … has gained impetus and virtually the entire tech sector has been impacted (including Tencent). Some are even beginning to wonder if China has now become uninvestable,” Gibb said in a note.

In October, Gibb said: “What is unnerving about the Chinese regulatory storm is that there is no end in sight”. This has largely proven to be true as many Chinese internet company stocks tumbled in Hong Kong on Wednesday, after Tencent sold a $3bn stake in Sea Limited, a Singapore-based consumer internet company. Chinese regulators have also hinted that their long-running crackdown on the sector is far from over.

This comes just a few weeks after Tencent sold a big stake in online retailer JD.com. Market players say these moves are likely to be a way to reduce regulatory scrutiny and fight the appearance of being a large monopoly company.

For years Van Dijk has been working to reduce the valuation gap between the group’s assets and that of its Tencent holding. It has led to a number of actions, such as the listing of Prosus in Amsterdam; a $5bn share buyback, the largest yet on the JSE; and a complex share deal between Naspers and its subsidiary, concluded late in 2021.

A big part of the push has always been to grow the group’s portfolio of e-commerce companies in order reduce the weighting of Tencent in the portfolio, but this has taken on new sense of urgency due to uncertainty in China.

Prosus sold down its stake in Tencent in April, from 31% to 29%, raising $14.6bn, which has been put to work in funding two of the group’s largest deals yet.

In June, Prosus acquired Stack Overflow, a knowledge-sharing platform for developers and technologists, for $1.8bn. It was the group’s largest buyout, after two failed large transactions, the first of which involved UK food delivery business JustEat for $8bn, were it was outbid by rival Takeaway.com’s all-share offer. It also put in a $9bn cash offer for eBay’s classifieds business a few months ago, but the US company chose to merge with Norway’s Adevinta instead.

In August, the group acquired Indian digital payments provider BillDesk for $4.7bn, cementing its place as one of the world’s largest fintech players through its PayU unit.

Through these actions the group’s portfolio outside of Tencent has swelled in value over the past five years, from $13bn to almost $50bn.

Time will tell whether these actions will be enough to stave off further losses in 2022, but with each passing day, week and month, the stakes grow ever higher for Van Dijk and his team to cast off doubts about Naspers being a top-10 global technology investor.

JSE may end 2021 at a record amid interest in Tencent

Asian markets are positive on Friday, with Tencent adding 3%, while the rand needs to lose 11c to reach R16/$
Markets
7 months ago

The non-Tencent assets, worth about $60bn, will be the drivers of long-term value creation
Opinion
8 months ago

Alibaba on a 12 times p:e, DiDi dumping the NYSE ... is the Chinese investment dream over for offshore investors?
Money & Investing
8 months ago

Cape Town-based payments company to use proceeds for African expansion, possibly including acquisitions
Companies
8 months ago