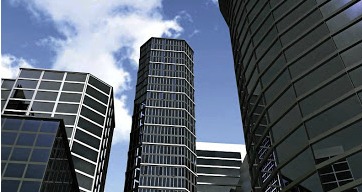 London — After more than a year of home working, property investors are betting that demand for office space in Europe will rise as Covid-19 vaccinations are rolled out and people return to work.

Global office real estate leasing volumes dropped 31% in the first quarter compared with a year ago, according to real estate broker JLL, though Europe proved more resilient than the US.

“The perception that the office is over is complete nonsense," said Keith Breslauer, managing partner of European property investor Patron Capital. “None of the smart money believes it."

Breslauer worked on three new office development opportunities in British regional cities on one day in June. “We weren’t alone," he said.

The long-term effect of the pandemic on working patterns remains unclear.

Banking firm HSBC plans to nearly halve its global real estate, while consultancy Deloitte has told its UK staff they can work wherever they want. US banks such as Goldman Sachs and JPMorgan have ordered employees back to the office.

“Some will expand and some will contract, some won't change at all," said James Corl, head of the private real estate group at US investment manager Cohen & Steers.

Corl said a rise in hybrid working — from the office a few days a week and the rest at home — is being counterbalanced by the need for more office space per person in an age of social distancing.

A supply shortage that predates the pandemic is also supporting prices even though companies may need 20%-30% less space, investors said.

The pandemic has hurt large firms in Europe less than initially expected — helped by strong government support — and most have continued to pay rent, analysts and brokers say.

US centres such as San Francisco and New York have not been so resilient, possibly because venture capital and private equity tenants are less able than multinationals to take on new leases, said Matthew McAuley, director of global research at JLL.

Investment transactions dropped sharply due to the pandemic, brokers say. But where deals have taken place, prices for offices in Europe’s central business districts have risen 13% in 2021 from 2020, according to Real Capital Analytics, while comparable US transaction prices have fallen.

“A number of overseas investors [are] willing to visit London and quarantine in order to inspect and bid on buildings," real estate broker Savills said recently.

New York-listed Kennedy Wilson last week bought an office block close to London’s US embassy for $252m — above an about $222m reported price for an aborted sale of the building in 2019.

For Britain, the “double storm cloud" of Brexit and Covid-19 is clearing, said Ronald Dickerman, president of property investor Madison: “We are very, very bullish on the UK recovery and London."

Madison, an investor in Capital & Counties, owner of London’s Covent Garden shopping district, in June bought a minority stake in the 37-storey Salesforce Tower in the City financial district.

RE Capital plans to spend up to £150m on central London offices this year. It bought a building in Westminster, close to Britain’s parliament, in 2020.

“When you look at deliverable supply in the next few years, it is very constrained," said Simon Banks, RE Capital’s head of UK real estate, adding “location is ever more important".

Employees may prefer to be near mainline rail stations as they remain cautious about buses or the metro, for example.

David Greenbaum, CFO of central European property firm CPI, said the pandemic had not changed its approach to the office, which makes up more than 50% of its portfolio.

Staff who were enthusiastic about working from home last spring are now missing out on training and collaboration opportunities, and the desire for home-working was likely to wane, he said. “The pendulum always swings."

Vacancy rates remain very low in cities such as Berlin, he added, underpinning the market.

Rents rose by about 2% in the first quarter for prime Berlin offices compared with a year ago and by more than 5% in Paris, while London’s West End was stable, according to CBRE. In New York’s midtown, with more unoccupied space, rents fell by more than 5%.

Investor interest in offices is increasing as logistics — warehouses — starts to look expensive.

“Yields in logistics have dropped 300 basis points in five years, from 7%-9% to 4%-6%. It’s very hard to make money in this space," said Patron Capital’s Breslauer.

Those changes, and a return to normal shopping, could put a lid on the sector.

JPMorgan CEO Jamie Dimon has repeated his desire for busy offices, saying remote work does not work ‘for those who want to hustle’
World
3 weeks ago

The R380bn sector won back investors’ love as the all property index rallied 20%, outmuscling equities, bonds and cash
Companies
3 weeks ago
Next Article