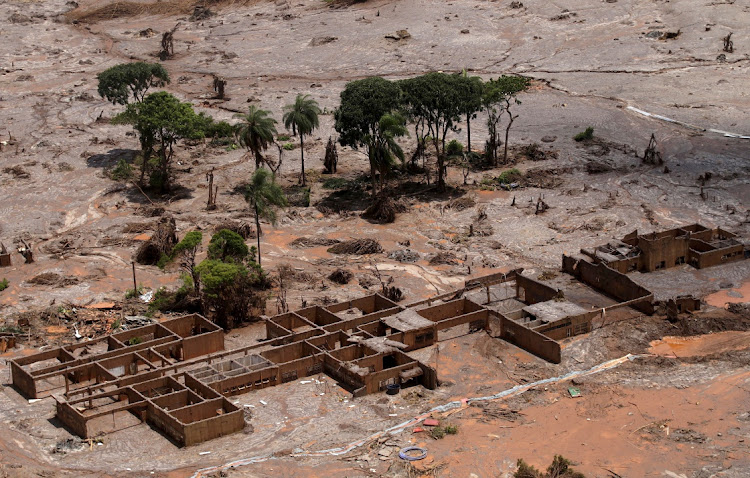 The debris of the municipal school of Bento Rodrigues district, which was covered with mud after a dam owned by Vale burst in November 2015. Picture: REUTERS/RICARDO MORAES

London — London’s Court of Appeal made a U-turn on Tuesday by agreeing to reopen a £5bn lawsuit by 200,000 claimants against Anglo-Australian mining giant BHP, reviving a case over a dam rupture behind Brazil’s worst environmental disaster.

Lawyers for one of the largest group claims in English legal history have been pushing to resurrect the £5bn lawsuit against BHP since a lower court struck out the lawsuit as an abuse of process last year.

In March, a Court of Appeal judge upheld that decision, dashing the hopes of claimants seeking redress for the 2015 disaster.

"Whilst we fully understand the considerations that led the judge to his conclusion that the claim should be struck out, we … believe that the appeal has a real prospect of success," they said.

The collapse of the Fundao dam, owned by the Samarco venture between BHP and Brazilian iron ore mining giant Vale, killed 19 and obliterated villages as a torrent of more than 40-million cubic metres of mining waste swept into the Doce river, reaching the Atlantic Ocean more than 650km away.

Tom Goodhead, a PGMBM managing partner who is bringing the claim on behalf of Brazilian individuals, businesses, churches, organisations, municipalities and indigenous people, called it a "monumental judgement".

BHP, the world’s largest mining company by market value, has labelled the case pointless and wasteful, saying it duplicates proceedings in Brazil and the work of the Renova Foundation, an entity created by the company and its Brazilian partners to manage reparations and repairs.

"BHP’s position remains that the proceedings do not belong in the UK," it said in a statement.

The case was revived after PGMBM in April applied for an oral Court of Appeal hearing — reserved only for exceptional cases — and argued the appeal judge had not properly grappled with arguments about why the case should proceed.

Claimant lawyers have argued that most of their clients have not brought proceedings in Brazil, that they are entitled to sue BHP in England and that Brazilian litigation is so lengthy that it cannot provide full redress in a realistic timeframe.

The lawsuit is the latest battle to establish whether multinationals can be held liable for the conduct of overseas subsidiaries on their home turf.

The appeal is expected to be heard in 2022 and any ruling is likely to be further appealed to the supreme court in London.

Mining firms shake up their boardrooms