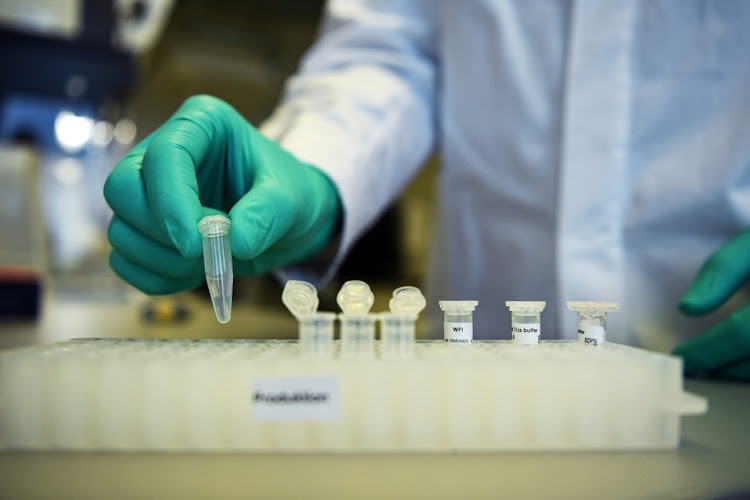 A CureVac employee demonstrates research on its vaccine for Covid-19 at a laboratory in Tuebingen, Germany, March 12 2020. Picture: REUTERS/ANDREAS GEBERT

German biotechnology company CureVac said on Tuesday it will give up on its first-generation Covid-19 vaccine candidate and instead focus on collaborating with GSK to develop improved mRNA vaccine technology.

The company’s shares were off about 8% after earlier plunging as much as 13%, hitting their lowest since going public in August 2020.

CureVac said it would abandon its application for approval from the European Medicines Agency for its first Covid-19 vaccine candidate, CVnCoV, after late-stage trials delivered disappointing results.

Abandoning the vaccine will avoid a potential overlap with approval timelines for its most advanced second-generation candidates, it said. The move also allows the company to focus on the race for new variant-specific vaccines, and for combination shots that prevent two or more infectious diseases.

That will also see it try a technology employed by more successful rival BioNTech, which modified the nucleosides — the molecules that determine the mRNA’s genetic code — to shield the vaccine against immune system attacks. CureVac had previously banked on non-modified mRNA.

The earliest potential approval of CVnCoV would have come in the second quarter of 2022, when candidates from the second-generation vaccine programme were expected to progress to late-stage clinical development, CureVac said.

“In the ongoing transition from acute pandemic to endemic, our decision ... reflects expected changes in public health needs that our second generation can potentially address,” said CEO Franz-Werner Haas.

The agreement CureVac signed to sell shots to the EU will end, with no obligation to repay the 450 million euros ($519 million) received from the bloc, the company said.

The EU commission did not immediately reply to a request for comment on refunding clauses in the contract.

Financial commitments to contract manufacturers would be made public over the next few weeks, but any such burdens were minor, Haas said on call with reporters.

CureVac cancelled deals in September with two prospective contractors to make CVnCoV. It said it would seek to repurpose the remaining infrastructure for future products.

Human trials for its second-generation shot could start in coming months, with any regulatory approval seen in 2022. Animal trials so far showed them to be superior to CureVac’s original Covid-19 vaccine.

The shot is the latest casualty in the drug industry’s race to develop a vaccine against the coronavirus, which has killed more than 5-million people and infected more than 238-million.

French drugmaker Sanofi also dropped plans for its own mRNA-based Covid-19 vaccine in September because of the dominance achieved by BioNTech with US partner Pfizer and Moderna with shots using the technology.

Instead, it will pursue the technology, acquired as part of its takeover of Translate Bio, in potential vaccines against influenza and other diseases.

Antibody cocktail reduced the risk of severe Covid-19 or death in patients, a study shows
Companies
10 months ago

Moderna says the new factory will produce the drug substance for mRNA vaccines, including its Covid-19 vaccine and shots for other diseases
Companies
10 months ago