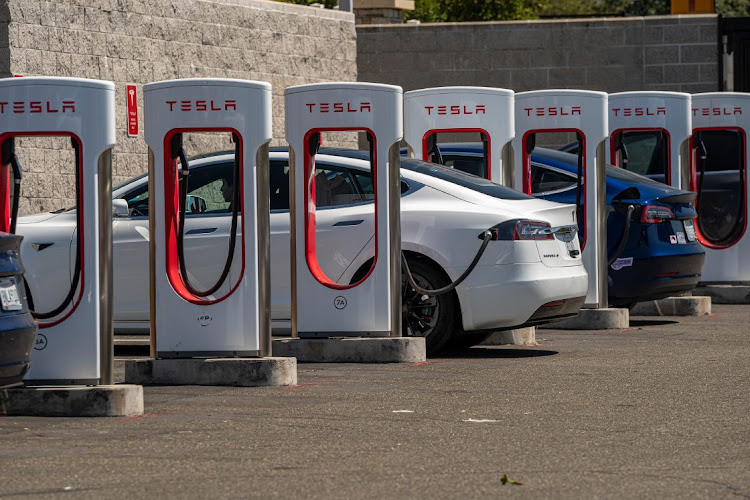 Tesla vehicles at charging stations outside a store in Rocklin, California, the US. Picture: DAVID PAUL MORRIS/BLOOMBERG

New York — Elon Musk will juice you up — yes, even you Nissan and Porsche people who have steered well clear of the Elon Show.

Tesla’s pledge to open its charging network to other car brands later in 2021, while largely expected, nevertheless marks an inflection point in the electric vehicle economy and, should it come to pass, will surely goose the pedal on EV adoption.

To date, Tesla has kept its plugs behind a walled garden because, well, because it could. When it was getting started, there was no incentive for anyone else to build and operate chargers, so it made its own, understanding fully that the electricity was as important as the electric vehicle. Simply put: plugs sold cars. As long as EV dabblers such as Chevrolet and Nissan didn’t have many of them, customers had all the more reason to buy a Tesla.

But with the coming parade of Tesla fighters came a surge in rival charging networks such as Electrify America and EVgo. Tesla’s charging map is still arguably better than its rivals, but not by much.

In the US and Canada there are 1,176 fast-charging Tesla stations, compared with 5,113 stations operated by others, according to the latest tally by the energy department. However, there are 20% more Tesla plugs and they are scattered more widely about the US, as the company leverages them as business development machines, from the badlands of North Dakota to the forests of Maine.

The most likely places for Tesla to drop its charging wall are in Europe, where it faces much more robust rival networks and stands to gain subsidies for brand-agnostic plugs. In Europe, Tesla owns just 16% of the public fast chargers and, not surprisingly, many Tesla vehicles on the continent are equipped with the more generic CCS charging port, rather than the company’s proprietary dock.

Meanwhile, in his home market, Musk’s hand has been further forced by his rivals, as competing car companies cobble together partnerships — known as interoperability agreements — that allow their customers to plug in to almost any network. Ford’s hodgepodge charge map, dubbed FordPass, comprises 16,000 stations, including those run by Electrify America and EVgo. Most of Montana and Wyoming is still a bridge too far for a Mustang Mach-E in the wild, but the rest of the country is fairly well wired.

In short, Tesla’s chargers are no longer as powerful at selling cars; Musk may as well use them to sell electricity. No doubt, he will also use them to squeeze hefty access fees out of FordPass and other electric vehicle start-ups such as Stellantis and Volkswagen. If the service is good, the company eventually might lure some drivers away from their Chevrolet Bolt or Volkswagen ID4. “There’s certainly a marketing aspect to it,” says BloombergNEF analyst Ryan Fisher.

There’s no telling when, where, or even if Tesla will knock down the wall around its chargers. The latest pledge came from Musk’s Twitter feed. And if the company does welcome other brands, there is likely to be an elaborate queuing system to give priority to the Tesla faithful. But the Supercharger network finally has viable competition, albeit a collective one, in the minds of car buyers and, apparently, in the mind of Musk.

Wyoming may see a few more Mustangs in the wild after all. Giddy up.