Hollywood hopes for fast and furious ticket taking for ‘F9’ 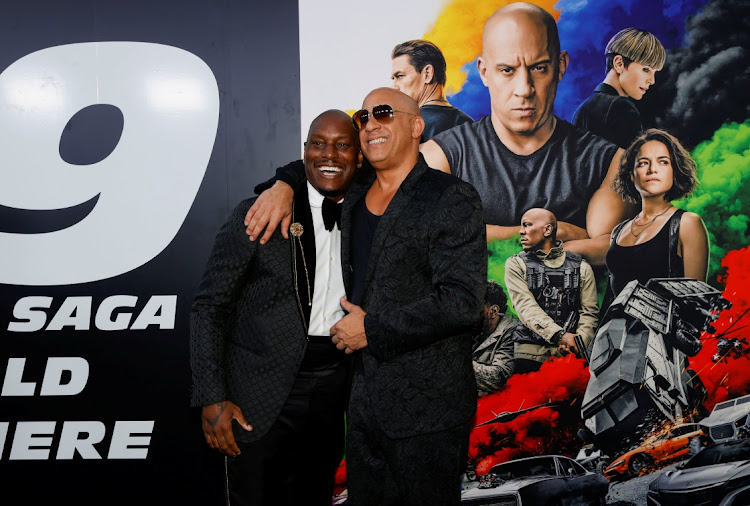 Actor and singer Tyrese Gibson and cast member Vin Diesel embrace as they attend the world premiere of the movie "F9: The Fast Saga" at TCL Chinese theatre in Los Angeles, California, US, on June 18, 2021. Picture: REUTERS/MARIO ANZUONI

Donna Langley, the Universal Pictures honcho who was one of the first studio leaders to delay a major movie because of pandemic concern, now has Hollywood’s hopes riding on that popcorn flick’s long-awaited arrival in theatres.

F9, the latest instalment of the Fast & Furious series, is a gut-churning visual spectacle of a film that has already generated almost $300m in global ticket sales since it opened overseas in May. It will be released on June 25 in the US, the world’s foremost movie market, where it stands to become a money-spinning monster that could kick off a cinema revival.

“I feel really good going into the release of the film,” Langley, chair of Comcast’s Universal Filmed Entertainment, said in an interview. “It feels that the audience is getting more comfortable to go back.”

That critics think the movie is “asinine” and “bonkers”, chock full of car stunts to make those even casually familiar with the laws of physics roll their eyes, is beside the point. Like many industries, movie-going was hit hard by the Covid-19 pandemic. Theatre revenue fell to nothing for most of 2020, forcing beloved cinematic venues to close permanently. Months into a recovery, the business is still hobbled, with year-to-date box-office receipts half of what they were at 2020’s matching point, according to data from researcher Comscore.

Hollywood insiders have been waiting for a familiar figure, a hero made  to save the day. Most predict it will come in the form of a tentpole, a big-budget instalment of a reliably popular franchise that can only be fully enjoyed on the big screen. Through some luck and shrewd decision-making by Universal, F9 has become that film.

“There is a lot of pressure, because let’s be honest, this is the first true summer blockbuster we’ve had in over two years,” said Paul Dergarabedian, an analyst at Comscore, harking back to the 2019 release of Walt Disney’s Avengers: Endgame.

To get here, Langley had to start by ignoring the naysayers at the dawn of the pandemic who said her quick decision to reschedule F9 was a huge mistake. In March 2020, she refused to indulge in the notion that a warm summer would be enough to stop Covid-19 spreading. Instead, she delayed the release of F9 until April 2021 — later postponing it twice more.

“It was a bit frowned upon at the time. I think to some it felt like it may have been an overreaction,” Langley said. “But in hindsight, all indications seem to point to manouevring and pivoting around this title and others have served us well.”

There are still potential pitfalls. On Christmas Day, AT&T’s Warner Bros released Wonder Woman 1984 in what also could have been a triumphant return to the movies. It exceeded forecasts for its opening weekend, generating $16.7m, but that was only a fraction of the $103m its predecessor Wonder Woman made during its opening weekend in 2017. Many users opted to stream the film on HBO Max instead, and it didn’t open the floodgates for audience-starved theatres.

But there have been encouraging signs, too. A Quiet Place Part II, the sci-fi thriller that ViacomCBS’s Paramount Pictures released in May, came roaring into the box office. It’s made more than $200m globally, about on par with the first movie in the series, and won’t be available to online audiences until July 12. (Langley said she has watched the performance of that film with great interest.)

Universal isn’t taking many chances with its crown jewel. It’s been on an expensive marketing blitz, having found itself in the unusual circumstance of advertising at two separate Super Bowls, one with the pre-Covid release date and one with the post-Covid date. It has also completely eschewed the tendency of its rivals Disney and Warner Bros to spread their bets and put new movies both on streaming services and in theatres.

With about 80% of US theatres open and some capacity restrictions lingering, analysts predict the film will generate as much as $60m in its domestic opening weekend. That’s not even half of the $147m that the largest Fast & Furious film, Furious 7, made on its opening weekend in 2015, and it would be a bit below average compared with the other movies in the franchise. Still, it would be the biggest release of the pandemic era by more than $10m.

On a Monday in mid-June, moviegoers packed into a Hollywood theatre for a screening of F9 and offered a reminder of why studios are keen to revive the cinema. Viewers applauded, gasped, laughed and munched popcorn, adding to the emotional resonance of Vin Diesel’s on-screen character, Dominic Toretto, as he battled his emotionally tormented brother. Hollywood is betting that impossible-to-replicate-at-home experience will drive people off the sofa and back to ringing up the big revenue figures from before Covid.

“I’ve made TV shows, I’ve done films, and other independent films, and some of those I could say: ‘The level of engagement, if you want to watch it on your iPad, great.’ I just don’t think that’s the case with this,” Justin Lin, the director of F9, said in an interview. “For a film like Fast, there’s something visceral if you see it in the theatres.”

The cinema chain has asked for a third extension for the publication of their plan, saying attendance is steadily growing
Companies
2 months ago
Next Article

Amid the wreckage, one cinema shines — The Labia

Amid the wreckage, one cinema shines — The Labia