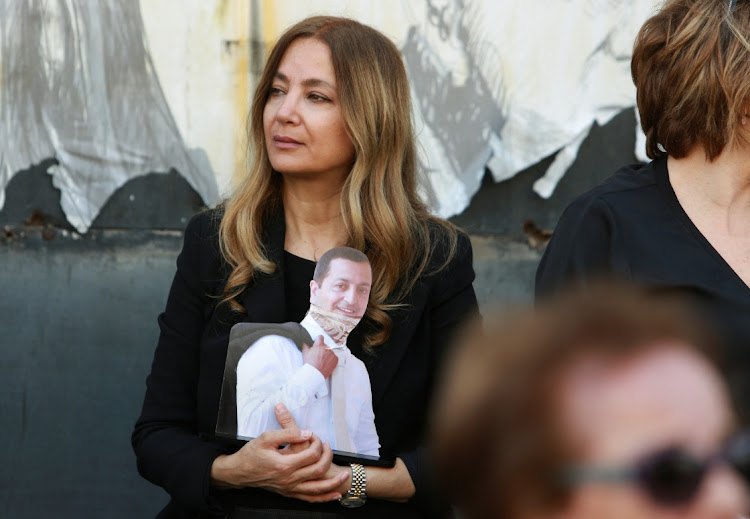 A family member of one of the victims of the Beirut port explosion holds a picture during a protest in Beirut, Lebanon, on April 4 2022. Picture: AZIZ TAHER/REUTERS

Beirut — Families of victims of the 2020 Beirut port blast are pressuring Lebanon’s government to keep its silos as a memorial, arguing the move would be a powerful acknowledgment of suffering in a country still struggling to come to terms with years of war and strife.

Ghassan Hasrouty worked at the towering white grain silos for nearly four decades, even through Lebanon’s 15-year civil war when he’d tell his wife he felt protected by the thick walls of the storage facility.

“He used to tell my mum, 'I’m scared for you [at home], not for me because there is nothing, no shrapnel, that can harm the silos … nothing can bring them down,” Hasrouty’s daughter, Tatiana, recalled.

On August 4 2020, Ghassan was working late when a huge chemical blast at the port ended his life and those of at least 215 others, and cleaved off part of the cylindrical towers.

As Lebanon marks the 47th anniversary of the start of the war on Wednesday, Ghassan’s daughter and other relatives of those killed in the blast are fighting the Beirut government’s plans to demolish the disembowelled silos.

Lebanese officials say the ruined silos should make way for new ones, the proposed move gaining momentum amid projections of global grains shortages due to Russia’s war in Ukraine.

But activists and bereaved families say the columns, which stand like a great tombstone at Beirut’s northern entrance, should stay as a monument — at least until an investigation into the blast can serve justice — in a country accustomed to moving on from violence without accountability.

“In Lebanon we got used to the fact that something happens, and then they bring us something bigger and more intense than that, and we forget,” Hasrouty said.

“They [politicians] work so that we wake up every day with new fears and new worries, and that’s why I say they [the silos] should remain, because maybe people pass by them and recall that ‘people really died here’.”

The probe into the blast, one of the biggest non-nuclear explosions ever recorded, has faced pushback from a political system installed at the end of the 1975-1990 civil war, when an amnesty was issued for warlords who gained government seats.

The war, which killed about 100,000 people and left 17,000 missing, is left out of school curricula, and Beirut’s most damaged areas were rebuilt with no public monuments. Historians say that has led to a collective amnesia about the war, which is something the families of blast victims are desperate to avoid.

“We all grew up with the civil war and remember how the rockets would fly above our heads. The Lebanese people forgot it because it was erased, because, simply, they reconstructed everything,” Rima Zahed, whose brother Amin died in the blast, said.

Zahed has since helped organise protests in support of the investigation and of the silos’ preservation. “Now we need the silos as the living witness to their crimes,” she said.

Lebanon’s government says it has other priorities.

Culture minister Mohamed Mortada said the cabinet had decided to demolish the silos and rebuild new ones based on a “purely economic assessment” of Lebanon’s food security needs.

Lebanon needs more wheat storage to cope with global grain shortages resulting from the Russian war in Ukraine, from where Lebanon imports most of its wheat, officials say.

Mortada said the buildings could not be renovated for technical and sanitary reasons, so had to be destroyed.

While the minister has put the silos on a list of heritage buildings, he noted the protected status could be removed if an alternative is found.

Urban activist Soha Mneimneh said the move to destroy the silos amounted to “the erasure of a crime scene”.

An engineers syndicate of which she is a member has commissioned a report on the silos to study the feasibility of renovating them. Mneimneh said they should be reinforced “so they stay in people’s collective memory, so it is not repeated”.

For Tatiana Hasrouty, the silos evoke painful memories, but are also a symbol of strength.

“I think now after he died there, the silos, some standing and some destroyed, symbolise for our family that [despite] everything that happened to us and all the sadness we have experienced, our family is still standing, steadfast, as if nothing can shake it.”

Shattered Beirut at the end of its tether

Shattered Beirut at the end of its tether