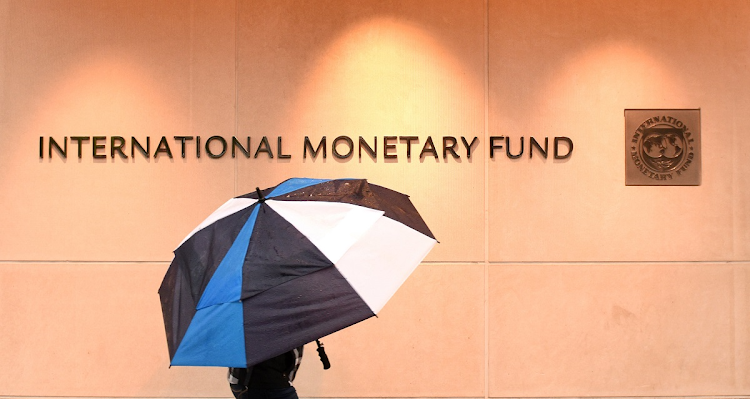 A pedestrian with an umbrella walks past the International Monetary Fund headquarters in Washington, DC, US. Picture: 123RF/BUMBLEDEE

Washington — The IMF hopes to mobilise about $45bn for a new trust to help a broader range of countries, including some middle-income economies, deal with climate change and other longer-term challenges, a paper prepared by IMF staff shows.

The IMF’s executive board is expected on Wednesday to approve plans for the new Resilience and Sustainability Trust (RST) that were hammered out by IMF staff after the Group of 20 (G20) major economies backed creation of the instrument in October.

Nearly three-quarters of the IMF’s 190 members would be eligible to borrow from the new trust, the global lender’s first facility set up expressly to help countries manage balance of payments risks posed by longer‐term challenges, the paper reads.

As IMF member countries confront the “immediate challenges of rising inflation, constrained fiscal space and pandemic recovery — heightened by risks associated with the war in Ukraine — they are also calling on the fund to help respond to longer-term challenges such as climate change and pandemic preparedness”, the paper reads.

The IMF already offers low-cost and zero interest rate financing to help countries deal with short-term challenges, such as capital flight, inflation or high commodity prices as well as medium-term fiscal and financial challenges. But it lacks a facility to help countries manage risk to balance of payments posed by longer-term threats, build economic resilience to shocks and tap opportunities to achieve sustainable, inclusive growth.

The IMF’s Poverty Reduction and Growth Trust is open only to low-income countries.

The RST, first proposed by IMF MD Kristalina Georgieva in June 2021, would fill that gap and offer countries affordable financing over extended repayment periods. The IMF has said it plans to begin lending under the programme by October.

It would be available to low-income and vulnerable middle-income countries, including small states, many of which have been hit particularly hard by the pandemic and its economic effect.

To qualify for lending from the new RST, countries will still need to develop “credible policy and reform measures”, have sustainable debt and adequate capacity to repay the IMF, and be part of a concurrent financing or non‐financing IMF-supported programme, the paper reads.

In addition to providing loans, the IMF has policy-co-ordination arrangements with countries, including Serbia, Rwanda and Senegal, that do not entail funding.

The eligibility criteria were set up to “preserve economic stability” while mitigating financial risks to the fund, the paper reads.

Richer IMF member can contribute to the trust by donating their unneeded special drawing rights, the IMF’s own currency reserves, from a $650bn allocation approved last August.

The funding is also expected to serve as a catalyst for additional public and private financing, the paper reads.

How it is used and paid for, and who gets the lion's share, will shape ultimate outcomes
Opinion
5 months ago

ISMAIL LAGARDIEN: The future is Asian, while SA is stuck in reveries of fallen ...

Lunch with Lionel October: Mediterranean grub and the problems with SA industry

ISMAIL LAGARDIEN: The future is Asian, while SA is stuck in reveries of fallen ...

Lunch with Lionel October: Mediterranean grub and the problems with SA industry