Turkey steps back from threat to expel 10 Western envoys 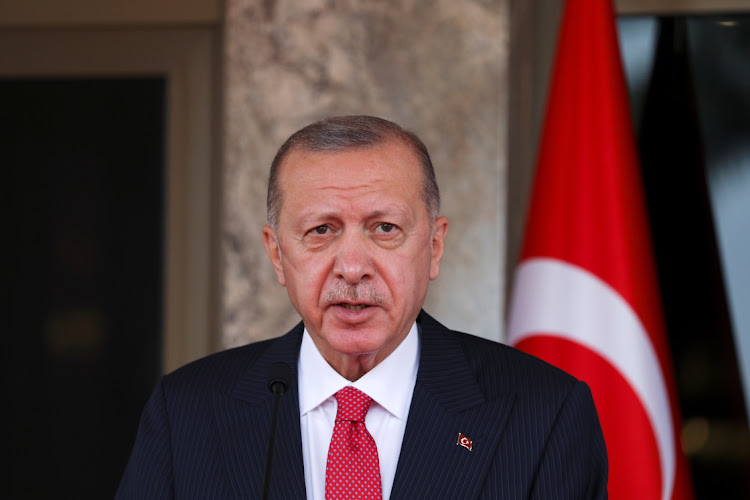 Istanbul  — Turkey and its Western allies climbed down from a full-blown diplomatic crisis on Monday after foreign embassies said that they abide by diplomatic conventions on non-interference, averting a threatened expulsion of 10 ambassadors.

President Recep Tayyip Erdogan, who said at the weekend he had ordered the envoys to be declared “persona non grata” for seeking the release of a jailed philanthropist, told a news conference they had stepped back and would be more careful.

“Our goal is never to create crises, it is to protect the rights, laws, honour and sovereignty of our country,” Erdogan said in a televised address after chairing a cabinet meeting.

“With a new statement made by the same embassies today, a step back was taken from this slander against our country and our nation. I believe these ambassadors ... will be more careful in their statements regarding Turkey's sovereign rights.”

The ambassadors, including the US envoy, had called on authorities last week to free Osman Kavala, a philanthropist detained for four years on charges of financing protests and involvement in an attempted coup. He denies the charges.

As Erdogan convened his ministers on Monday afternoon for a session which could have confirmed the expulsions and triggered the deepest rift with the West in his 19 years in power, several embassies put out a brief statement.

“The US notes that it maintains compliance with article 41 of the Vienna Convention on Diplomatic Relations,” the US embassy said on Twitter. The other embassies published similar messages or retweeted the US message.

A Turkish version of the US statement said the embassy “confirms” compliance with the convention, which some observers said could be read to suggest that the embassies were pledging future compliance.

“Strategic ambiguity at work ... allows Erdogan's spin doctors to claim that the West has surrendered, while the English version gives the impression back home that the West has stood its ground,” said former opposition parliamentarian Aykan Erdemir on Twitter.

The US state department later said Monday's statement on Twitter meant “to underscore that the statement that we put out on October 18 was consistent with article 41", adding it would pursue dialogue with Turkey.

“We are steadfast in our commitment to promoting the rule of law, to promoting respect for human rights globally,” said state department spokesperson Ned Price.

“The Biden administration seeks co-operation with Turkey on common priorities, and as with any Nato ally, we will continue to engage in dialogue to address any disagreements.”

A diplomatic source said talks on a plan to reduce tensions were led by the US mission and Turkish officials, including presidential adviser and spokesperson Ibrahim Kalin and Foreign Minister Mevlut Cavusoglu.

The envoys aimed to highlight Vienna Convention principles while seeking guidance from Turkish officials on what move might be “palatable” for Erdogan, the source said, adding they were cautiously hopeful that the Twitter statements would help ease tensions even if the Turkish government gave no assurances.

In response to Monday’s developments, the Turkish lira rallied after earlier hitting an all-time low of 9.85/$, and was at 9.5850/$ at 8pm. It has lost almost a quarter of its value this year.

Kavala, a businessman and contributor to civil society groups, is charged with financing nationwide protests in 2013 and involvement in a failed coup in 2016. He has been held in detention while his trial continues.

Rights groups say his case is emblematic of a crackdown on dissent under Erdogan. Kavala said on Friday he would no longer attend his trial, as a fair hearing was impossible after recent comments by the president.

The diplomatic tension has added to investor concerns about Turkey’s economy after the central bank, under pressure from Erdogan to support growth, unexpectedly slashed interest rates by 200 points last week despite inflation rising to nearly 20%.

The 10 envoys were summoned by the foreign ministry last week after calling for a just and speedy resolution to Kavala’s case, and for his “urgent release”.

Parliament speaker Mustafa Sentop said earlier on Monday that Turkey's constitution banned discussion of active court cases, including by Turkish politicians in parliament, and that the envoys' statement marked a “clear and disrespectful” interference.

The European Court of Human Rights called for Kavala's release two years ago, saying there was no reasonable suspicion he had committed an offence and finding his detention had been intended to silence him.

Erdogan set for showdown with the West over Turkish philanthropist

At the heart of the row is a call by ambassadors from 10 countries to free Osman Kavala, which Erdogan says is a direct attack on Turkish sovereignty
World
2 months ago