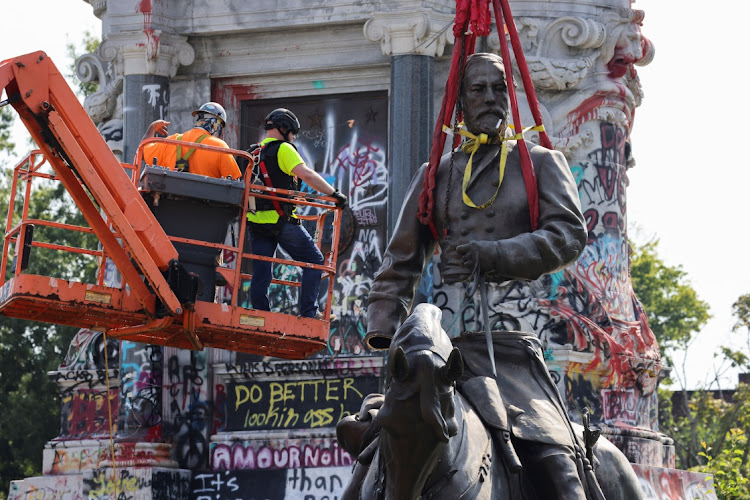 The statue of Confederate Gen Robert E Lee is removed by a construction team, in Richmond, Virginia, the US, September 8 2021. Picture: REUTERS/EVELYN HOCKSTEIN

A statue of Confederate commander Robert E Lee was removed from its base in Richmond, Virginia's capital, early on Wednesday after a year-long legal battle over a monument that has been the focus of protests over racial injustice.

As onlookers watched, crews secured the 6.4m bronze statue of the US Civil War leader to a crane that hoisted it off its  12.2m granite pedestal and placed it on the ground.

Since 1890, the towering memorial has stood at its location on Monument Avenue in Richmond, the former capital of the proslavery Confederacy, a group of Southern states that fought against Union forces in the 1861-65 Civil War.

The Robert E Lee statue was one of the largest statues still standing in the US. Memorials that honour leaders of the Confederate side have become targets of protests against racism. Defenders of the statues say they are tributes to the bravery of those who fought to defend the South.

Officials have said workers will move the statue of Lee, dressed in military attire and mounted on top of a horse, to a secure, state-owned storage site until a decision on its future is finalised.

The hoisting of the statue was captured on the Twitter feed of governor Ralph Northam, a Democrat, who announced plans to remove it in June 2020, 10 days after a white Minneapolis policeman killed George Floyd, who was black man, sparking nationwide protests.

During the past six years, more than 300 symbols of the Confederacy and white supremacy have been taken down, while about 2,000 still stand, according to the Southern Poverty Law Center.

Streets around the statue were closed on Tuesday evening as crews prepared a viewing area for the public to watch the statue’s removal.

On Thursday, workers will remove plaques from the monument’s base and replace a time capsule believed to be at the site with a new one.

Last Thursday, the Virginia Supreme Court unanimously ruled   in two cases that Northam could remove the statue. In summer 2020, the removal was challenged by nearby residents and a descendant of the family that transferred ownership of the statue to the state.

The new monument aims to deliver ‘social justice’ for the historic role of women in Mexico, says mayor
World
1 week ago