‘A large proportion of the wealth of the City during the 18th century was dependent on…the trafficking of enslaved people,’ tour guide Ildiko Bita says 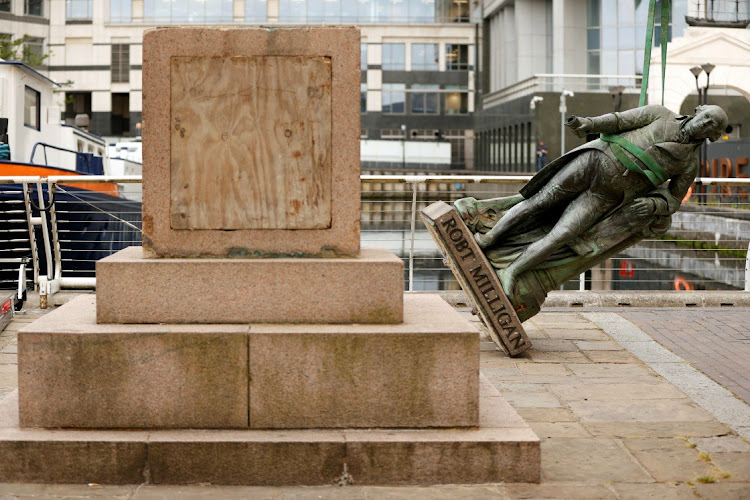 A statue of plantation and slave owner Robert Milligan is pictured being removed on June 9 2020 by workers outside the Museum of London Docklands near Canary Wharf, following the death of George Floyd who died in police custody in Minneapolis. Picture: REUTERS/JOHN SIBLEY

London — A tour showing London’s links to the slave trade aims to shed light on how British institutions — from megabanks to the state church — prospered on the backs of Black lives.

“Slavery and the City” takes in the financial centre’s quaint cobbled yards, grand statues and statuesque buildings, highlighting its oft-hidden links to colonialism.

“Slavery is something where there has been a conspiracy of silence for almost 200 years,” said tour guide Ildiko Bita.

“Without a doubt, a large proportion of the wealth of the City during the 18th century was dependent on slave labour and the trafficking of enslaved people,” said Bita as she led a group of 11 through some of the capital's oldest streets.

The tour comes as the world grapples with race after George Floyd, an unarmed black American, died in police custody in May. His death sparked worldwide protests and triggered a re-evaluation of the legacy of colonialism.

Statues to once-revered slave traders have come down.

Companies whose wealth depended on the exploitation of Black people have issued apologies, governments have promised to promote equality and white-dominated institutions have pledged change.

Yet many on the tour said Britain's slave past was still under the radar, with little taught at school in Britain or debated openly even now.

“The slave trade is something we should recognise as part of our history so that we can move on from it,” said Hannah Gowland. “We should bring it to the forefront of our education system because it is still impacting people today.”

Gowland, from the northern English town of Middlesborough, came on the tour out of curiosity and said she was shocked to learn about the Church of England’s supporting of the slave trade through its ownership of a sugar plantation in Barbados.

The Church of England has vowed to review places of worship to ensure any links to slavery are removed or put in context.

Expected to run over just one weekend in September, the tour — organised by Six in the City tour guide group — was extended amid high demand and is now fully booked until January.

“Walking tours such as these are crucial, to address and unveil elements of history that still play a key role in our current society,” said Lavinya Stennett, founder of The Black Curriculum, a social enterprise that promotes the teaching of Black history in British schools.

“Tours offer a key insight and memory, making the lesson tangible,” she added.

Along with the church, the tour puts financial institutions and banks — central to London's economy — under close scrutiny as it probes the roots of British establishment.

“Venerable City institutions with us today, such as Barclays, Rothschild, Lloyd’s of London and Freshfields, profited from the slave trade and the wealth obtained from slavery bought influence,” Bita said.

“For example, at least 25 governors and directors of the Bank of England had links to slavery, as did many lord mayors [of the City of London]," she said.

Lloyd’s of London insurance market and the Bank of England are among organisations to issue apologies for links to slavery — links that some on the tour never knew existed.

“I came on this tour to educate myself, which it has done,” said participant Kerry Penfold after the tour. “It teaches you about our past and contextualises it to the modern day.”

The governing body in charge of London's financial district is reviewing its landmarks with links to slavery and racism, as part of its response to the Black Lives Matter movement.