Scrumhalf believes he was wrongfully yellow-carded against Australia last week 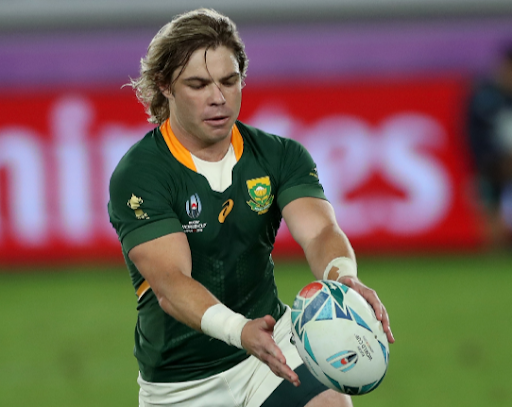 Faf de Klerk is still perplexed that he was yellow-carded against the Wallabies at the weekend. Picture: GETTY IMAGES

Faf de Klerk does not believe there is something fundamentally amiss with the Springboks’ discipline and he is still perplexed that he was ordered off the field with a yellow card in last weekend’s defeat against the Wallabies.

De Klerk defended the Boks’ discipline, even though they frequently fell on the wrong side of the law in their recent defeats against the Australians. They received two yellow cards in each of those two matches.

“I honestly don’t think it was a yellow card,” said De Klerk. “I think I clearly played the guy’s arm and not the ball. I’m not really sure about that one.”

Close to the end of the game, Jasper Wiese was yellow-carded and later cited for dangerously clearing a ruck. He has since been cleared and will not face further sanction after a hearing.

It’s not forced stuff or guys doing stupid things, going off the rails, or losing focus. We just need to be a bit more sharp

“Our discipline was pretty decent in the first half and in the previous games,” De Klerk asserted. “I think there have been a few errors from guys going off script.

“Also Willie’s [Le Roux in the first Test against the Wallabies] one where he tried to intercept. It’s not forced stuff or guys doing stupid things, going off the rails, or losing focus. We just need to be a bit more sharp.”

De Klerk then got to the nub. “If we can stay in control of how we want to play, hopefully we get the scoreboard on our side and then we don’t have to try some things and go out of character and away from the way we want to play.”

The Springboks play the All Blacks in Townsville on Saturday and it goes without saying their discipline will have to be above reproach.

The danger the All Blacks pose is all too apparent.

“They are very dangerous when you make mistakes from turnover attack,” De Klerk noted. “Their counterattack is one of their big scoring methods. We can’t make any errors on attack. That’s when they come alive.”

De Klerk and No 8 Duane Vermeulen are desperate not to get sidetracked by the fanfare leading up to the 100th meeting between the Boks and the All Blacks.

We are going to give it our best whatever the occasion is. That’s for the people who write books about it

“Our main focus is just to get back on track in this competition,” said De Klerk. “Hopefully we’ll play well and remain in contention to still win. Obviously the history books will write it and it will be important to some people.

Vermeulen reminded there is still a competition to win.

“We want to compete in this Championship. For us it’s about prepping for New Zealand,” he said.

“We are going to give it our best whatever the occasion is. That’s for the people who write books about it. For us it’s about being a better team than we were last week.”