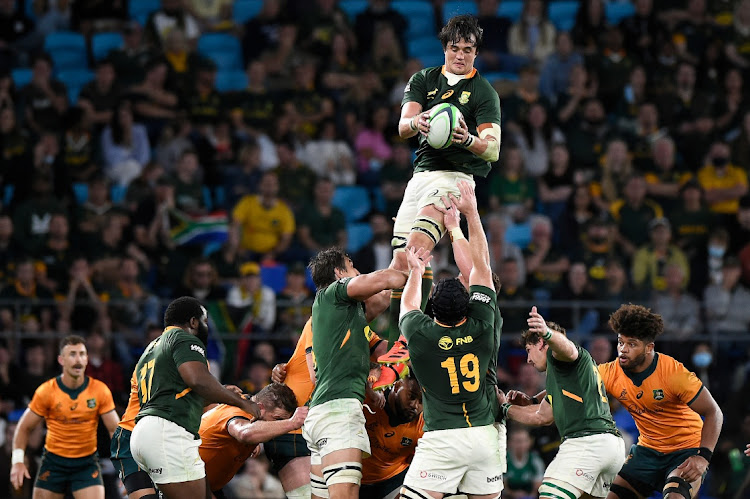 Franco Mostert of the Springboks takes a lineout ball during the Rugby Championship match between the South Africa Springboks and the Australian Wallabies at Cbus Super Stadium on September 12 2021 in Gold Coast, Australia.Picture: GETTY IMAGES/MATT ROBERTS

It is touted as one of rugby’s great rivalries, but as New Zealand and SA clash for the 100th time on Saturday it is again the All Blacks who are overwhelming favourites ahead of their Rugby Championship encounter.

A century of Tests between the two countries — they first played each other in 1921 — has been characterised by attritional physical battles, a healthy dose of controversy and some bitter antagonism, but saw the All Blacks rarely lose in the professional era.

Since SA emerged from sporting isolation in 1992, they managed 16 wins in 60 meetings with the Kiwis, with only one victory in the last 10, emphasising an increasingly one-sided rivalry.

Their last clash came at the start of the World Cup in Japan two years ago when New Zealand won, only to then lose to England in their semifinal and watch the Boks go on to be crowned world champions.

Since then, New Zealand have returned to winning ways, and are on a run of nine successive Test victories, while SA squeezed to a narrow series win over the British & Irish Lions last month and have returned to the Rugby Championship with two home wins over Argentina followed by two away defeats to Australia, leaving them without much expectation for Saturday’s meeting in Townsville.

The All Black-Springbok rivalry, which began with a home win at Dunedin in August 1921, grew despite infrequent tours before and after World War 2 and because the Tests were tightly contested and the winning margins tiny.

It took on a much wider significance when the All Blacks’ tour in 1976 led to calls for New Zealand to be kicked out of the Montreal Olympics and, when the International Olympic Committee refused, led to a boycott by 29 mostly African countries, in protest at sporting contact with SA, then under white minority rule.

Anti-apartheid opposition in New Zealand to the Springbok tour of 1981 divided the country and saw the decisive Test in Auckland almost abandoned when a light aircraft dropped “flour bombs” on the field in protest.

“More than 150,000 people took part in over 200 demonstrations in 28 centres, and 1,500 were charged with offences stemming from these protests,” according to the country’s official government history website.

“Rugby had established itself not only as New Zealand’s number one sport but as a vital component in this country’s national identity. In many ways the playing of rugby took a back seat in 1981, and the sport suffered in the following years as players and supporters came to terms with the fallout from the tour.”

SA’s narrow World Cup final win over the All Blacks in Johannesburg in 1995 came soon after the first election to establish majority rule and was seen as a step towards closing racial division, led by new president Nelson Mandela’s enthusiastic acceptance of a sport that had largely been the preserve of the Afrikaner minority.

The story of that triumph was turned into the Hollywood film Invictus, although New Zealand claim their team suffered food poisoning on the eve of the final, administered by a mystery waitress called Suzie.

SA have since won two more World Cups, but New Zealand established themselves as the sport’s dominant power with little end to that supremacy in sight.

“Make no mistake, when they run out onto the pitch, there is an inner arrogance that comes to the fore. Just like us, they believe they are the best,” said former SA wing Ray Mordt, who scored a hat-trick of tries against the All Blacks at Eden Park in the 1981 flour-bomb Test and still finished on the losing side.