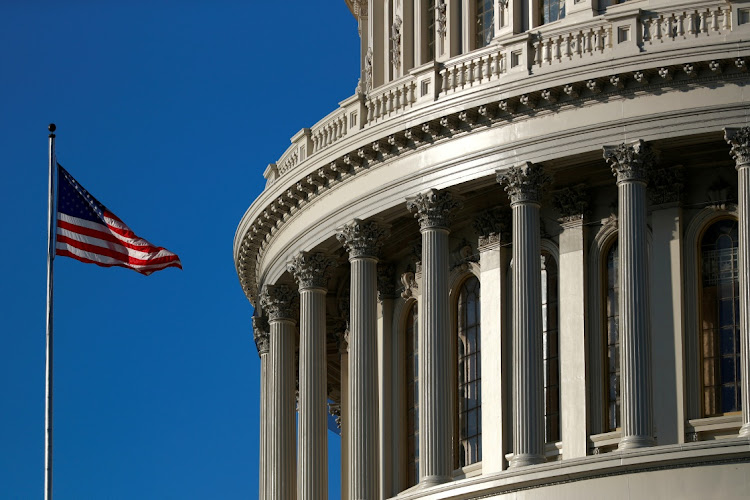 An American flag flies outside of the US Capitol dome in Washington, the US. Picture: REUTERS/TOM BRENNER

Democrats are pursuing an almost certainly doomed strategy to avert a government shutdown and stave off a federal default, raising the likelihood of financial-market stresses that will ultimately force US legislators’ hands.

While the House of Representatives on Tuesday night approved a bill to keep the federal government funded past the end of the fiscal year on September 30 and to suspend the debt limit for more than a year, blanket Republican opposition means it’s assured of failing in the Senate.

Once that Senate rejection —  expected within days — is complete, the clock will be ticking until the government runs out of authorisation to keep many operations running past month-end. Later in October, according to treasury secretary Janet Yellen, her department will exhaust its capacity to keep paying US obligations.

While multiple scenarios are possible, close observers of fiscal negotiations have pencilled in the Democrats eventually opting to remove the debt limit from the stopgap spending bill. That would ensure the bipartisan passage of the government funding measure, with Democrats raising the debt ceiling using a fast-track process that bypasses the filibuster, removing the need for GOP votes.

“We expect most of these ‘DC problems’ will be resolved,” Michael Zezas, Morgan Stanley’s chief US public policy and municipal strategist, and fixed-income strategist Ariana Salvatore wrote in a note on Tuesday. However, “it’s important for markets to note that the path to resolution on these issues likely includes elevated uncertainty in the near term,” they wrote.

The following is a look at a potential timeline.

The Senate needs 60 votes to cut off any filibuster of the stopgap spending bill — known as a continuing resolution — that includes a suspension of the federal debt limit until mid-December of 2022 along with funding for the government until December 3 2021. That means 10 GOP votes in the 50-50 Senate.

Senate minority leader Mitch McConnell has said there is no chance that a debt-limit increase could pass the chamber. Republicans have nearly universally said they won’t vote for an increase to the government’s borrowing ability as Democrats prepare to spend $3.5-trillion on social programmes via separate legislation.

Democrats have nevertheless called on Republicans — who as a group have raised no major objection to the stopgap spending bill — to join in the debt-limit suspension vote. They have invoked the long history of similar bipartisan congressional action despite sharp differences over fiscal policy, such as Democratic opposition to GOP former president Donald Trump’s tax overhaul.

“We’re not going to let them off the hook,” said representative Hakeem Jeffries of New York, a member of House leadership. Senate majority leader Chuck Schumer said every Democrat is “outraged” at GOP opposition to suspending the debt limit.

After the continuing resolution-cum-debt-limit-suspension fails, Democrats have other fiscal action to focus on. Schumer and House speaker Nancy Pelosi have to unite their caucus’s progressives and moderates over what’s now a $3.5-trillion bill to expand social spending, paid for in part with tax increases. Pelosi has also promised a September 27 vote on a bipartisan $550bn infrastructure plan, which has already passed the Senate.

Financial market stress may start to rise as Republicans and Democrats blame each other for leaving the federal government on course for a shutdown and a default. Financial-industry heavyweights have already weighed in with calls for swift action. And stocks slumped on Monday in part thanks to worries over the debt limit’s approach.

If Democrats stick to their strategy and Republicans stay dead set against it, legislators could cause a government shutdown after September 30, something that has happened for varying stretches several times since 1995. That could in turn escalate fears about a default once the Treasury runs out of space through it’s so-called extraordinary measures to avoid breaching the debt limit.

Treasury bills maturing in October to November are trading at a discount compared with those due outside that range, as traders price in the chance of turmoil around the time the Treasury runs out of cash. That discount could expand, and stocks could tumble, as the game of chicken continues.

The S&P 500 Index tumbled more than 16% over a fortnight in the summer of 2011 during a bitter partisan standoff over the debt limit — one that spurred S&P Global Ratings to cut what had been the US’s AAA sovereign credit rating.

That is one sample of the kind of pain markets could wreak. Another: when the House rejected a $700bn rescue plan amid the throes of the global financial crisis, the S&P 500 plunged almost 9%, the most since Wall Street’s crash in 1987.

Even that may offer little guide if the two sides were to allow the Treasury to default on its obligated payments to everyone from bondholders to social security recipients to federal contractors.

“We’ve been very clear in our message to Capitol Hill that it would have a very significant effect generally on the financial markets if there were a delayed payment,” Robert Toomey, MD of capital markets and associate general counsel of the Securities Industry and Financial Markets Association, told Bloomberg. “At the highest level it is truly unknown, because it has never happened before.”

Long before such market pressure, Democrats are likely to strip the debt limit from the continuing resolution — smoothing bipartisan passage and avoiding or ending a shutdown.

As for the debt limit, there’s a backup option that would allow them to raise it with only Democratic votes, using the so-called reconciliation process that bypasses the filibuster. Congressional watchers say they could proceed with a stand-alone bill, without needing to attach it to the broader tax-and-spending bill that is also using the reconciliation format.

“We believe that Democrats are now planning for a more realistic Plan B to lift the debt ceiling and prevent a government shutdown,” Evercore ISI analysts Sarah Bianchi, a nominee for a post in the US trade representative’s office, and Tobin Marcus wrote in a note on Tuesday. “The single most likely outcome at this point is that Democrats will lift the debt ceiling on a party-line basis.”

That Democratic-only option is, however, time consuming and will require legislators to act quickly to have a debt-limit increase bill ready before the Treasury runs out of cash. It requires a series of steps to prepare, including two mega voting sessions on the Senate floor known as vote-a-rama, which typically last all night.

This process would also require Democrats to raise the debt ceiling to a specific threshold, rather than just suspend it as they can do under a bipartisan process. That makes for a politically challenging decision about how much leeway they want to give the federal government to borrow.

If the Democrats aren’t able to proceed in time, only a bipartisan vote could avert default, requiring Republicans to reverse their position.

Even in the case of a brief period of the Treasury failing to make good on US payments owed, “Americans would pay for this default for generations”, Mark Zandi, chief economist at Moody’s Analytics, wrote on Tuesday.

Republicans have sometimes proved more likely to co-operate if Democrats offer to discuss limits on spending over time. While no formal proposal has been made, some bipartisan medium-term fiscal framework could boost the chance of a debt-limit suspension.

“There must be a backup plan,” said senator Ben Cardin, a Maryland Democrat, without specifying what that might be.