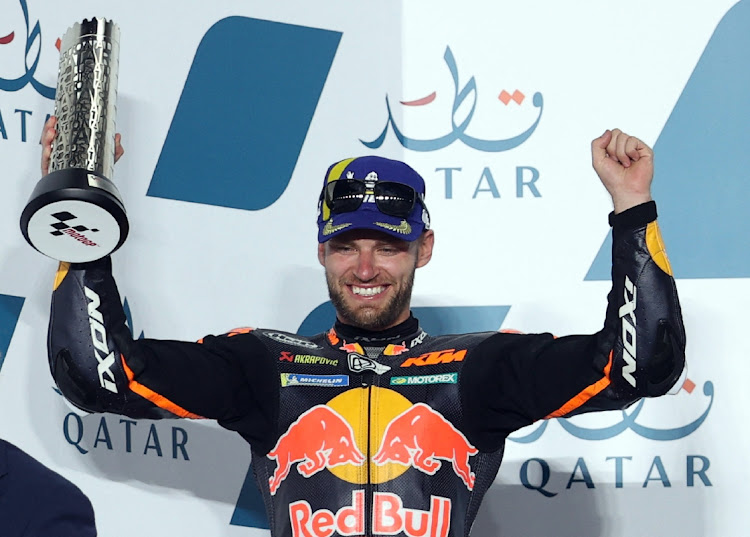 A month after the Red Bull KTM Factory Team walked away from testing in Malaysia scratching their heads as they tried to figure out what wasn’t working, their South African rider, Brad Binder, dispelled their worries when he took second spot at the opening grand prix of the MotoGP season in Qatar on Sunday.

Binder was second, just 0.346sec behind Italian Enea Bastianini, who took an emotional victory for his Gresini Racing team as a Ducati satellite outfit. Fausto Gresini, the Italian founder of the team and two-time 125cc world champion, died from Covid-19 in 2021.

For Binder, second was perhaps the result he had secretly been expecting despite the concerns around testing. KTM have worked hard on the RC-16 bike, seeking the solutions to the issues they have had at the Lusail circuit in Qatar in the past, a track where they have had little success.

“Today was a great day,” said Binder, who has two MotoGP wins to his name. “The whole weekend has been good. To start off in FP1 [Free Practice 1] and be first was a bit of a shock, so I knew I had a really good level. We had some issues over the weekend, but, honestly, I had so much confidence and I felt so good with the bike from the beginning to the end.

“I just need to say a massive thank you to KTM — they pulled this one out of the bag. We made such a huge step from where we finished last year. For us to be on the podium in Qatar is insane. Last year here was the hardest race of the year. I’m really happy with the way things went. For the future, I’m definitely looking forward to a few more podiums.”

Before the season, Binder spoke of finding more consistency. He qualified seventh on the grid, the third row. His launch from the start was spectacular as he rolled into the first corner in third, then, for a short breath, to second, before finding his groove in behind the front two of Esapargaro and his Honda teammate, six-times MotoGP world champion Marc Marquez.

Binder and KTM had gone with two medium tyres as the soft tyre did not suit the bike. Honda went soft on both wheels, a decision that would backfire.

Marquez ran wide after a hot entry, then Esapargaro followed suit as Bastianini eased by, and Binder found himself in second through showing patience. He chased Bastianini hard to the line, but the 2021 Ducati model Bastianini is on has some oomph and, despite his tyres wearing, the Italian held on for a popular win.

Binder was congratulated on the cool-down lap by his younger brother, Darryn, who finished 16th after qualifying at the back of the grid on his WithU Yamaha.

Like his elder brother, Darryn showed the patience that had sometimes deserted him in his Moto3 years, to pick his way through a MotoGP field that was uncertain and desperate. It was a good start for Darryn. A better start for his brother.