At R3.8m the limited-production machine is the most expensive Japanese bike yet to go under the hammer 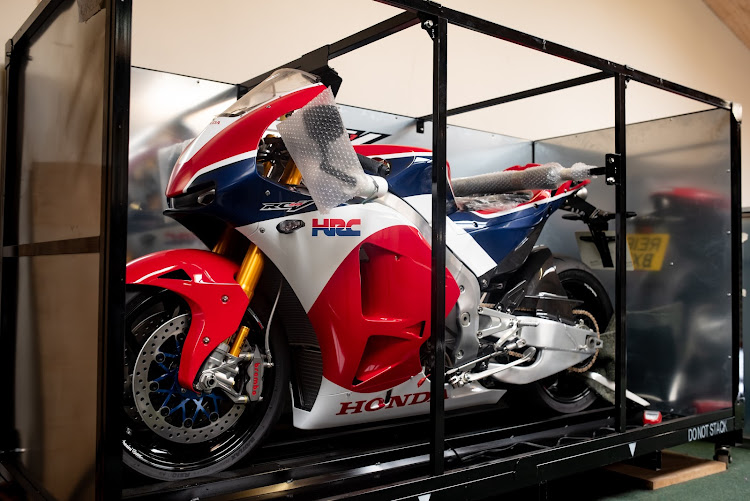 The Honda RC213V-S was introduced in 2015 as a limited-production, road-legal MotoGP bike. Picture: SUPPLIED

An as-new example of Honda’s RC213V-S has just broken a new world record, becoming the most expensive Japanese motorcycle yet sold at auction.

Hosted by specialist automotive marketplace Collecting Cars, the “MotoGP bike for the road” sold for a £182,500 (R3.8m).

The rare superbike has never been ridden and remains in its original flight case, with just one mile (1.6km) on the odometer. Having never left its shipping crate, the bike is pristine with no damage or wear.

The RC213V-S was introduced in 2015 as a limited-production, road-legal MotoGP bike, sharing 80% of its parts with the Repsol Honda raced by Dani Pedrosa and Marc Marquez in that year’s MotoGP championship.

Powered by a 999cc four-stroke V4 engine, this 2016 model also features the full HRC Race Kit, which comprises a recalibrated ECU, a titanium exhaust system, a front ram duct, a race-pattern quickshifter, a data logger and a remote control cable for the front brake lever. These upgrades reduce the bike’s total weight by 10kg and increase power output from 117kW to 160kW.

Edward Lovett, founder of Collecting Cars, said, “Honda’s RC213V-S is a thrilling, exquisitely crafted machine, and this example attracted global attention and extremely competitive bidding on Collecting Cars. We are proud to have achieved yet another world-record sales price — this time for an incredible road-legal MotoGP that will be a jewel in the new owner’s collection.”

The three-cylinder adventure bike is lighter, slimmer and more powerful
Life
8 months ago
Next Article