Team SA has one last chance to bag a medal in the relay race, but it has been hit by bad luck 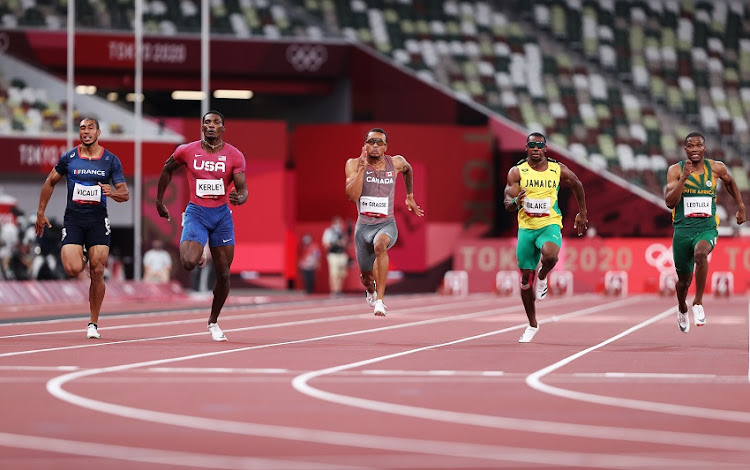 Jimmy Vicaut of France, Fred Kerley of the US, Andre De Grasse of Canada, Yohan Blake of Jamaica and Gift Leotlela of SA compete in the men's 100m semi-final in Tokyo, Japan. Picture: GETTY IMAGES/PATRICK SMITH

Team SA’s last remaining real podium hope — at least on paper — storms into action in Tokyo on Thursday morning‚ but looking like a shadow of the outfit that triumphed in the men’s 4x100m at the World Relays a few months back.

At least two members from that relay team are missing — Gift Leotlela suffered an injury in the men’s 100m semifinals on Wednesday and Thando Dlodlo was omitted by the selectors.

That leaves top sprinter Akani Simbine‚ who ended fourth in the 100m semis‚ and Clarence Munyai‚ a decent bend runner with poor form after picking up a quad injury a month or so ago.

Wayde van Niekerk had said he would consider stepping into the breach‚ but relay coach Paul Gorries said on Wednesday the sprint star — the first man in the world to run a sub-10 100m‚ sub-20 200m and sub-44 400m — was not available after all.

Van Niekerk would not compete in the 4x400m either‚ he added.

The South Africans will line up in a tough heat at 4.30am on Thursday‚ competing in lane seven against three teams that have run faster this season.

The top three from the two heats will advance to Friday’s final‚ along with the two fastest time qualifiers.

Hosts Japan‚ Trinidad and Tobago and France cannot be discounted either.

Of their rivals in the heat‚ the British‚ Jamaicans and Trinidad and Tobago were not in Poland. Some teams in the other heat were also not there‚ notably the US‚ China and Canada.

SA faced them all at the 2019 world championships in Doha‚ where they finished fifth after setting a 37.65sec national record.

But Gorries isn’t spoiled for choice. His form sprinters are Simbine and US-based Shaun Maswanganyi‚ a semifinalist in both the 100m and 200m.

Everything will hang on the handovers the squad has been practising. After them‚ SA’s medal chances are thinning out all the time.

Rocco van Rooyen was unable to advance in the men’s javelin on Wednesday‚ throwing a best of 77.41m to miss out on the top 12.

Michelle Weber‚ who finished 18th at Rio 2016‚ ended 21st in the marathon swimming as she battled in warm conditions and water temperature of 29°C.  “The race was tricky‚ very different to anything I’m used to ... very‚ very hot swim‚” she said. “Back to the drawing board and we’ll come back stronger for the next one.”

Melissa Williams ended 24th in the park skateboarding competition‚ and Erin Sterkenburg was 20th in the women’s sport climbing.

Charlene du Preez was eliminated in the women’s Keirin and Jan Spies was unable to advance to the round of 32 in the men’s sprint.

Kyle Blignaut will compete in the men’s shot put final on Thursday (4.05am SA time)‚ but the youngster shouldn’t be considered a contender. If he can hit a personal best and some of the main rivals struggle‚ then he could find a back door onto the podium.

Michael Mcglynn is in action in the men’s marathon swim and Wayne Snyman competes in the 20km walk at 9.30am on Thursday. Cyclist David Maree takes part in the Omnium.​

$28bn is the estimated end cost, after Covid forced a postponement
News & Fox
1 year ago

It takes a thousand defeats to win, says Lamont Marcell Jacobs, who started the race as an underdog
Sport
1 year ago
Next Article