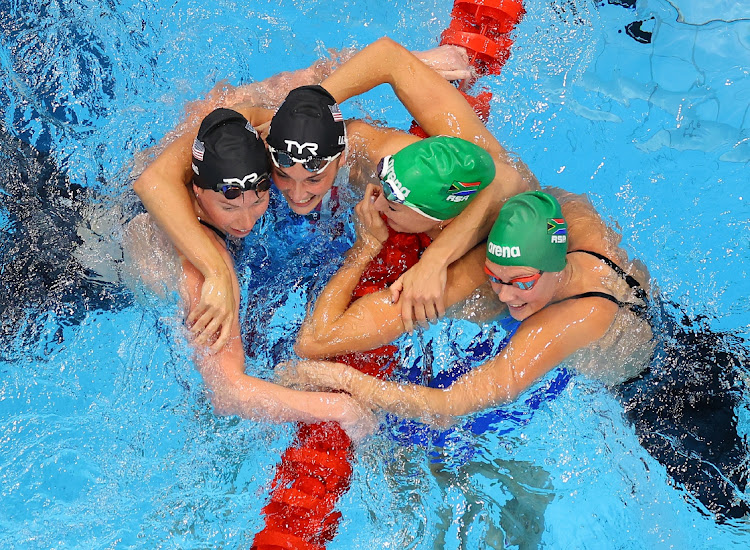 Tatjana Schoenmaker’s parents said they have been overwhelmed with support and thanked South Africans and the team behind their golden girl’s achievement as the country basks in the glory of their daughter.

The 24-year-old University of Pretoria swimmer offered a golden ray of sunshine for SA as she smashed an eight-year-old world record in the 200m breaststroke to win Team SA’s first gold medal at the Tokyo Olympic Games.

Schoenmaker opened Team SA’s haul with a silver medal in the 100m breaststroke and was followed by Victoria Bay-born surfer Bianca Buitendag‚ who won silver in the women’s surfing. The pair account for the only three medals won by Team SA by Tuesday.

“We are very proud‚ said Renske‚ Schoenmaker’s mom. “But at the same time‚ it takes a village to raise a child. We are not the only people. There are so many people behind these athletes.

“The medical staff‚ the support team‚ the coaches‚ friends‚ teammates and families. We just want to say thank you to everybody involved in Tatjana’s successes. It is incredible and we cannot comprehend this. It is unbelievable.”

Her father‚ Rene‚ said the family was happy for Tatjana and that his daughter’s achievements were exactly what the doctor ordered for the happiness index across the country after the social unrest and looting last month.

“It is also about what it has done for the country. You know as a country we have gone through some difficult times over the last couple of weeks and this is nice to see.”

Rene said he was overawed with love and support his family has received.

“I was shocked to see the reaction from people around the country and what it has done for them. That to me makes it even better. That is unbelievable.”

Tatjana’s boyfriend and swimming mate, Ruan Ras, could not hide his excitement.

“I don’t think it is ever going to sink in. I mean we knew she was capable of doing it but just facing that reality is amazing. I’m just so proud of her,” he said.

Kaylene Corbett and Schoenmaker made history as they became the first Team SA women swimmers to feature in an Olympic final since 2000. The two were in the 200m breaststroke final and Corbett placed fifth in her debut Olympics.

“It’s unbelievable to know that you can train with someone who can smash a world record‚” said Lizanne Viljoen, who trains with Schoenmaker and Corbett at Tuks.

Godfrey Blake was with his mates at the airport to receive Schoenmaker. “I’m part of the Tuks sports school‚ the same school that Tatjana attended. It’s amazing‚” he said.