LETTER: Rights bodies must condemn China for its Uighur abuses 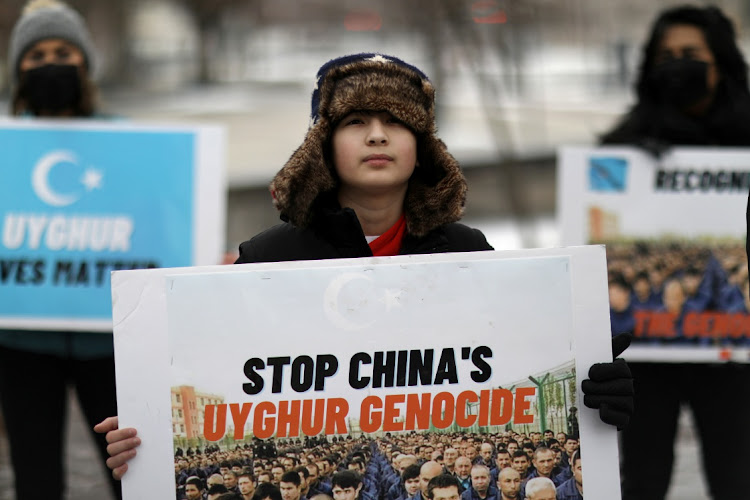 People take part in a rally to encourage countries to act against China's treatment of its Uighur population and Muslim minorities, in Washington, DC, the US, February 19 2021. Picture: REUTERS/LEAH MILLIS

Anyone watching the BBC’s lead news story on June 22 would have been aghast at the unfolding human rights tragedy of the Muslim Uighur people in China, where the deliberate separation of children from their families, faith and language is taking place in the far western region of Xinjiang.

As highlighted by BBC Today, it gets worse: hundreds of thousands of adults are being detained in giant “re-educational” camps. The newscast revealed comprehensive evidence about what is happening to the Uighur people in China.

China is accused of locking up hundreds of thousands of Muslims without trial in the Xinjang region, and while it denies this by telling the world these people are willingly attending “vocational schools”, the BBC’s investigation has found evidence that points to racial profiling of a whole section of the population.

Amnesty International says authorities have criminalised what they label “illegal religious” and “separatist” activities and have clamped down on “peaceful expressions of cultural identity”. Many government departments actually banned Muslim public servants from fasting during Ramadan.

Given that the BBC is one of the most reliable news sources in the world and trusted by millions, surely human rights activists and organisations should unequivocally condemn China for such human rights abuses? Apartheid practices such as racial profiling also need to be condemned by all human rights groups activists, either individual or organisations.

Recently the acting secretary-general of the ANC condemned and even threatened to sever diplomatic ties with another country she accused of human rights abuses, but not a word on China. Are there various degrees of human rights abuses in the eyes of the acting secretary-general? One must question the legitimacy of a supposed vociferous human rights organisation calling itself Africa4Palestine when it is equally silent about these crimes perpetrated by the Chinese government against humanity, and the same government’s apartheid practices.

Human rights abuses anywhere across the world are anathema.  But for activists to be selective in their condemnation depending on where the abuses occur speaks volumes about their veracity.  And when they choose to overlook other abuses like genocide and occupations around the world, this is indisputable evidence of their duplicity.

Amid the international outcry over China’s treatment of the Uighurs, the US-listed Daqo New Energy says tours of its facilities are available
Companies
4 months ago

China punishes jailed Uighur doctor for my activism, says daughter in US

Gulshan Abbas disappeared in 2018, but source says she was charged for terrorism and jailed in 2019
World
8 months ago

This year’s Olympic Games are already mired in controversy, while next year’s Winter Games in Beijing are being widely pushed by Xi Jinping
World
6 months ago
Next Article