Besides rooting out security threats, the government needs to single-mindedly drive pro-growth reform and economic stimulus

To bounce back from recent traumatic events, the Ramaphosa administration would do well to consider the following three-pronged strategy:

The ghastly pictures beamed worldwide have cast a large shadow over the country as an investment destination. We now need to persuade people that SA is safe for investors, companies making long-term bets and skilled people. This should begin with the timely arrest and prosecution of insurrectionists, rooting out enablers within the state and ANC, and overhauling the leadership of the security establishment.

Action by the security forces, while respecting human rights, must be visible to quell all threats and win back trust. Confidence must be restored that families are safe in their homes, communities are protected and properties are secure. South Africans watching the shocking violence would have realised that most looters were poor and hungry and acting out of desperation, even if manipulated by conspirators.

The economic cost of the unrest is estimated at R50bn, a wake-up call to the consequences of half our population, mostly African, living in poverty in proximity to nonracial middle- and upper-income communities. This structural fault line was the subject of a lecture I gave a year ago at the University of Cape Town (UCT), “From a two-speed economy to one for all South Africans”, in which a 10 point economic plan to turn the tide towards inclusion and economic dynamism was presented.

A key proposal was for the introduction of a basic income grant (Big). I have more recently homed in on a form of this Big I believe is affordable and would have the most effect. This is an “unemployment grant” for the more than 11-million South Africans aged 18-59 who have no other form of state income.

At R800 a month, the cost of such a grant, which I propose be introduced in the next six months with modalities subject to expert advice, would be about R100bn annually. This represents a modest 2% of SA’s GDP. The state should bring back the Covid-19 relief grant, with modifications as necessary to provide immediate relief.

The following options could be used to fund the unemployment grant:

SA has reached a ceiling for the overall taxes individuals and companies can bear. But modest sacrifices by the wealthy and middle classes over time, without increasing income tax rates, are achievable. It is worth giving up a little to lance the boil and avoid another R50bn looting spree.

Tax reforms take time to effect, time we do not have. The Ramaphosa administration needs to show now that it is acting boldly. So for the first year the unemployment grant would have to be funded by the state, and thereafter the introduction of reforms to tax rebates can lower annual fiscal costs. 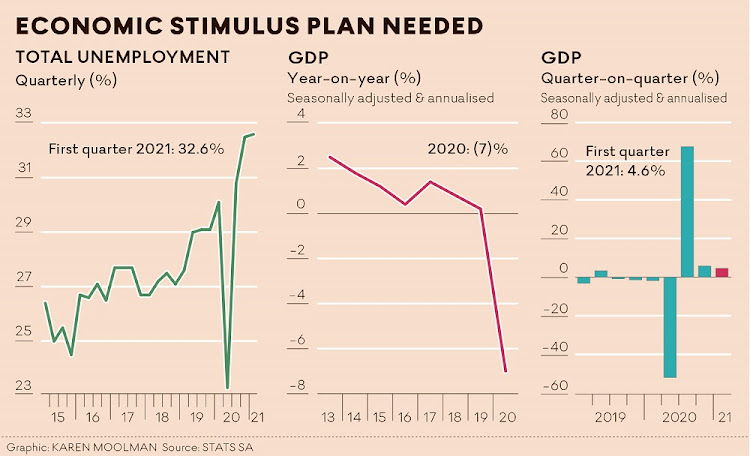 Before the critics yell, “But what about our fiscal constraints?”, here are the reasons it is affordable:

Another focus for stimulus should be small, medium and micro enterprises (SMMEs) hammered by the unrest and pandemic. The government should consider a sizeable scheme, about R50bn, to provide equity capital — not grants — to SMMEs. The likes of the Public Investment Corporation, Industrial Development Corporation, the banks and insurers should partner rand-for-rand with the government and identify businesses to recapitalise, earn healthy returns from and resuscitate. This capital would be an investment in the future of businesses on which millions of jobs depend.

Stimulus should be against the backdrop of a credible, well-communicated and comprehensive pro-growth set of economic reforms to restructure state-owned enterprises, energy, transport and telecommunications and create jobs.

This must also be accompanied by a war on corruption and wasteful and irregular expenditure, and reforms to strengthen, capacitate and modernise the public service and state-owned enterprises and contain the public sector wage bill. The government has started this process with the announcements on SAA, the 100MW energy cap and the corporatisation of the ports. Now it must accelerate and deepen these reforms.

The objective should be to boost economic growth to about 5% annually and reduce unemployment to 20% in five years. In pursuing this objective, the president should be single-minded and expect his team to perform against this single objective.

This three-pronged attack is not divisible. It is not a grants vs job creation or growth trade-off. All three need to be executed together.

• Coleman, formerly a senior fellow at Yale University and partner at Goldman Sachs, is co-chair of the Youth Employment Service and member of The Foschini Group board.

Government needs to see the private sector as a true partner, whose expertise and capital can leverage its plans
Opinion
1 week ago

More unequal now than during apartheid, the country appears to be treading the same path as its northern neighbours
Opinion
1 week ago

TOM EATON: Is this an insurrection, a counterrevolution or a food riot?

TOM EATON: Is this an insurrection, a counterrevolution or a food riot?