A question we often get in response to the recently published National Development Plan (NDP) assessment report is — in what direction is SA trending? Are things worse or better today than when the NDP was published in 2012?

One cannot draw an average across different objectives, but perhaps the metrics that give the closest approximation are economic growth and job creation. Both of these outcomes are dependent on achieving many of the other NDP goals. Citizens need access to quality healthcare to be part of a productive labour force.

Good education is needed to equip the labour force with the necessary skills. A capable and ethical state is a prerequisite for policy certainty, which translates into business and consumer confidence — both necessary inputs into economic growth, which creates jobs. 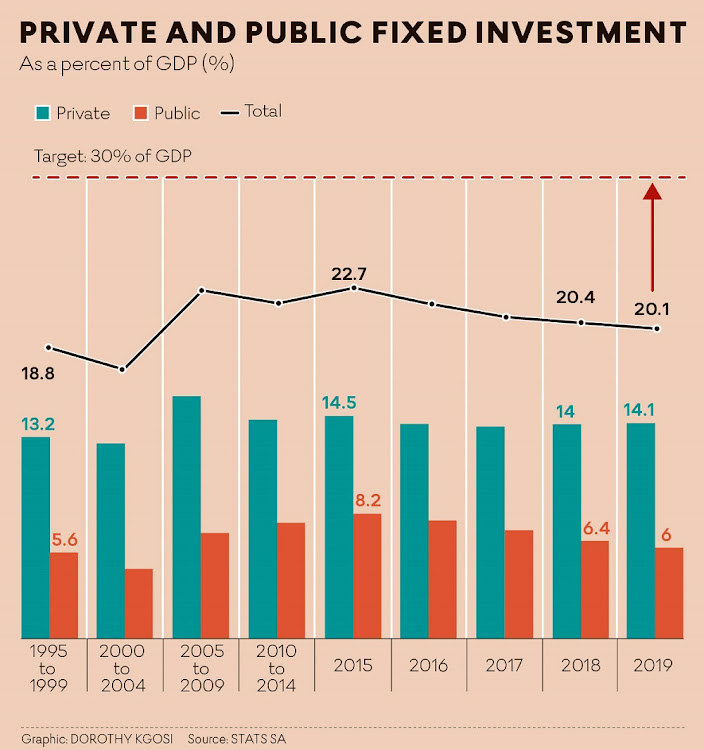 Over the past five years, the SA economy has been growing at a slower rate than the population. Between 2015 and 2019 (before the Covid-19 pandemic), the population grew by an average of 1.4% per annum. In comparison, the average annual economic growth rate in real terms over the same period was 0.8%. As a result, the average South African has become poorer.

Growth has been far below the target of 5.4% the NDP envisaged SA should average between 2011 and 2030. The country was,  therefore, sliding backwards even before the onset of the pandemic.

The pandemic has made matters even worse. SA’s economy in 2020 was 7% smaller than in 2019. The Bureau for Economic Research’s (BER) most recent growth forecast for 2021 is for the economy to grow at 3.7%, but bear in mind the base effect: even if GDP remains at the same level as in the fourth quarter of 2020 for each of the four quarters of 2021, the economy will still have grown by 2.8% in the 2021 calendar year.

Fixed investment can help stimulate economic growth and job creation. The public sector (specifically network industries), as well as the private sector (particularly to increase the output of the non-mineral tradeable sectors), need to play a role. In 2019, investment amounted to 20% of GDP — 14% by the private sector and 6% by the state — and was far below the 30% target of the NDP.

Other key NDP proposals to boost inclusive growth are to increase exports; hire more young, unskilled work-seekers; raise savings and investment through fiscal policy; lower the cost of transport and logistics; and strengthen the social wage. The NDP foresees that many jobs would be created in the services sector and in domestic-orientated activities.

It also notes that “some 90% of jobs will be created in small and expanding firms” and that, as a result, as SA expands access to employment a large proportion of working people would receive low pay. This emphasises the importance of strengthening the social wage, which we will consider in a later piece in this series.

Another vital but often overlooked component of economic transformation is environmental sustainability. The economic cost of climate change is becoming increasingly apparent. In the past, these costs were, in many ways, indirect and far removed; this is rapidly changing. Extreme weather events illustrate the direct economic costs of climate change. Impoverished households are especially vulnerable to the physical and economic effects of extreme weather events such as droughts and floods.

An example close to home is the impact the 2017 drought had on the Western Cape’s tourism industry, and those it employed.

The NDP highlights the need for environmental sustainability and achieving an equitable transition to a low-carbon economy — the “just energy transition”. SA’s efforts to help mitigate climate change can contribute to the goals of economic transformation and job creation.

The NDP sets a target for 20GW of electricity to be generated from renewable sources by 2030. In 2019, SA’s power generation capacity from renewable energy was 6.5GW (compared to close to 38GW from coal). The 11.8GW to be procured from independent power producers (IPPs), gazetted in September last year, brings us closer to that target.

Investing in renewables is not only crucial from an environmental perspective but also for economic growth. Eskom’s energy availability factor (EAF) — which measures its electricity production as a share of the maximum that could have been produced — has been declining since 2017.

The Integrated Resource Plan sets an EAF target of 75%; in 2020, Eskom missed this target by 10 percentage points. Investment in additional capacity, such as through the Risk Mitigation IPP Programme and the Renewable Energy IPP Procurement Programme will help address our energy crisis and, through attracting investment, stimulate economic activity. But for that to happen we urgently need to move beyond the planning phase and into operation. Only then can we begin to alleviate the plight of the 7.2-million South Africans unable to find jobs.

• Fourie is a senior economist and Kershoff deputy director at the Bureau for Economic Research. This is the second instalment in a series on SA’s progress towards the 2030 goals of the NDP.

Structural economic reforms are a prerequisite for the recovery of the economy, anchored by urban development
Opinion
1 year ago

It’s high time that stakeholder theory, as embraced by Raymond Ackerman, becomes the norm for SA businesses
Opinion
1 year ago
Next Article

Household spending plunged more in 2020 than in global financial crisis

WATCH: This is how SA can lift investment in infrastructure

Household spending plunged more in 2020 than in global financial crisis

WATCH: This is how SA can lift investment in infrastructure