Employers will try to shrink their real estate footprints, but the line between workplace and home space will clearly be blurred 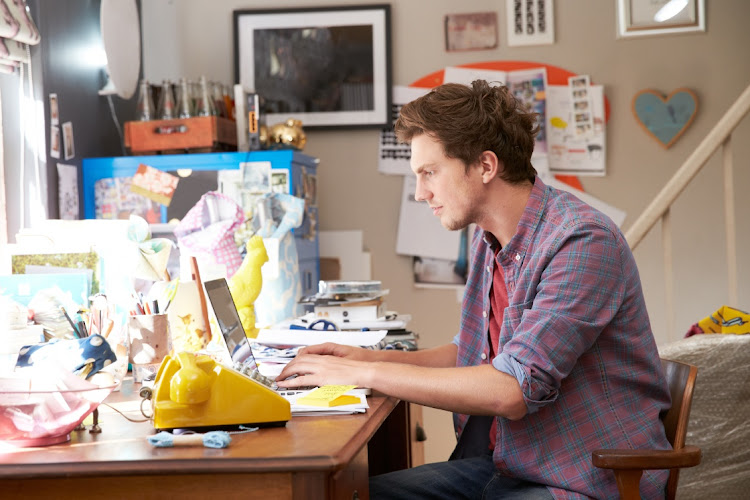 Home or office? Will there be a difference after the pandemic? Picture: 123RF/CATHY YEULET

I’m writing these words at my desk in a large open-plan office in midtown Manhattan. Bold, no?

OK, not that bold. The office is mostly empty, and I can get here easily by bike. Plus, hardly anybody in New York City has Covid-19 right now. That may be changing, but for the moment the risks of going in to work seem quite low.

As for the rewards, well, on my three days in the office over the past couple of weeks I’ve gotten to see a few familiar faces, albeit mostly covered by masks. I’ve had not one but two in-person conversations with my boss.

I’ve enjoyed the free snacks and lunch that my employer provides. (As internal Facebook communications recently leaked to the Verge reveal, I am not the only person in corporate America who has been missing them.) I have also appreciated sitting at a nice big desk staring at two nice big computer screens and using an in-house chart-making app that doesn’t work quite so seamlessly from home (I really like to make charts).

The change of scenery is worth something, too. I don’t think that overall I’m more productive at the office than at home (NB: I do not have small children), but switching to one location after a long time at the other does seem to have a positive effect. Getting home from work in the evenings feels surprisingly rewarding, too.

In-person seems clearly better for training new employees, building and maintaining a corporate culture, and just having colleagues get to know one another well enough to be able to work together effectively

Then again, I am writing these words in my home office, which is equipped with an adjustable desk and a big computer screen (although not two) that I did not possess in March. Before then I worked from home an average of a little less than one day a week. Post-pandemic I’m guessing two days a week will be my norm (and I’m not the only one).

The office is great for some things, but the saved commuting time and ability to focus at home are worth a lot. I also have a big home library that I often consult for work, and there’s a far bigger library a few blocks away that is currently off limits but presumably won’t be forever.

These are, of course, the considerations of someone whose employer allows him the flexibility to work at home. But all indications are that far more American white-collar workers will be given such choices after the pandemic than before — and given the estimated 60-million commuting hours a day they have been saving by not going in, a lot more will take advantage of them.

The potential consequences of this shift have been discussed for months now, but my return-to-the-office experiences have got me thinking a little harder about how things might play out.

Many of the key questions revolve around what exactly offices are for. In an interview published in the Harvard Business Review in July, workspace researcher Jennifer Magnolfi Astill offered a helpful taxonomy of the “four primary work modes of an office”:

Right now, midtown-Manhattan offices are pretty great for hunkering down and getting stuff done — focus — but that’s partly because nobody else is there.

Going into an office does help a lot in delineating between work and personal life, but the advantages of big, modern, open-plan offices over home in enabling focused work can seem pretty modest (and depend a lot on one’s home circumstances). Then again, focused work is hard everywhere these days: I am reminded of an interview years ago with technology researcher Clay Shirky in which he described staying on a New York City subway train through 32 stops in order to finish a project without distraction.

The other three work modes all require connection with other people. A lot of collaboration in large organisations was already occurring across cities and continents before the pandemic, and the past six months have made clear that almost all such work can be accomplished virtually, at least for a while.

Socialisation and learning, though, are much harder to do all-online. In-person seems clearly better for training new employees, building and maintaining a corporate culture, and just having colleagues get to know one another well enough to be able to work together effectively.

Yes, there are companies that have managed to do all these things for years in entirely dispersed fashion, and I imagine there will be more of them in the future. But I don’t think most organisations are ready for this, meaning they’ll still need spaces where employees congregate regularly — aka offices.

Still, if lots more employees are working from home or some other remote location two or more days a week, some things about these offices will have to change. One possibility is that employers will try to shrink their real estate footprints by turning to hot-desking, a practice already established at consulting firms and some other big companies in which one has no permanent personal workspace and just takes whatever desk is available.

My London-based Bloomberg Opinion colleague Chris Hughes argues that in most cases this is a false economy that will cost more in lost worker morale than it gains in rent savings, but as someone who has effectively hot-desked his way around Bloomberg offices in multiple cities in the US and abroad and got a lot of it, I do think there are ways to structure the practice that aren’t so alienating (but also less likely to result in big space savings).

Another challenge will be how to maximise the opportunities for in-office socialisation, learning and collaboration when much of your workforce is only intermittently there. Do you have everybody come in on certain days? Impose a rotating schedule for different divisions and teams? Have lots and lots of off-sites? Or just rent a big meeting space every couple of weeks?

Offices aren’t going away, and they shouldn’t. But they are going to face more competition than they used to, and employers will need to think harder about the purposes they serve.

Why people should not be forced to return to the office

Will Covid-19 kill off Sandton and other swish business hubs?

ARTHUR GOLDSTUCK: The office (and Office) gets a Zoom and Zoho makeover

You may not have heard of Zoho, but then you likely hadn’t heard of Zoom before you were sent home to work
Opinion
8 months ago
Next Article

How to... maintain corporate culture in the middle of a pandemic

How to... maintain corporate culture in the middle of a pandemic