Introduction of a national minimum wage will positively affect poor households, women in particular, as they are disproportionately represented in the poorest households and in the most vulnerable jobs 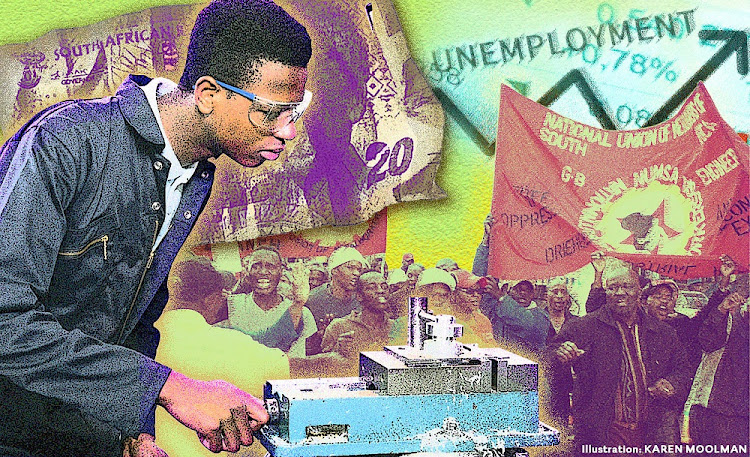 November 23 2018 will be the historic day President Cyril Ramphosa signed into law a national minimum wage.

In the lead-up to the enactment there had been a number of criticisms of this policy measure, almost raising the same question: why is SA introducing a  national minimum wage in an economy with such high unemployment? The argument by those who have been against this move is that it will lead to significant job losses and is therefore inappropriate for SA. On the contrary, a national minimum wage is appropriate policy.

The past two decades have seen a large increase in low-paid work in SA. The numbers are shocking: 47% of workers — almost 6.5-million people — earn less than R3,500 a month. About 35% — more than 4-million people — earn less than R2,500 per month. About 22% of the workforce are currently not covered by any collective bargaining or sectoral determination that protects workers from low wages.

The evidence is quite clear — the large growth in very low-paid work has done nothing to address the unemployment challenge in SA. Instead, it has generated vulnerability and insecurity among low-paid workers. Continuing with exploitative wages and working conditions is neither an effective policy for addressing unemployment nor a basis for creating conditions for sustainable economic growth in SA.

A lot of thought has also been given to an efficient and effective exemption process so that firms, including small firms that genuinely cannot afford to pay these wages, will be given an exemption for a set period.

Labour markets, especially in low-wage economies, are sites of significant asymmetries in power. Employers have significantly more power than workers and unless this power imbalance is addressed the labour market will continue to generate high levels of low-wage work. Many low-wage workers — domestic workers, farm workers, workers in retail and services — are not covered by collective bargaining processes and have little bargaining power. Where these do exist, they do not always protect the most vulnerable workers. A national minimum wage is an effective policy for correcting the asymmetries in power relations in the labour market, and addresses the inadequacies in our collective bargaining systems.

And a lot of thought has been given to potential job losses. We need to carefully consider the evidence. Contrary to all the hype, the extensive international research on the impact of minimum wages is quite conclusive: minimum wages set at a reasonable level, and cautiously and carefully implemented, do not result in an overall increase in unemployment, and may well lead to a growth in employment.

There is evidence of this around the world, including in developed countries such as the US and developing countries like Indonesia. SA has benefited from understanding how minimum wages have been implemented in a range of countries and from extensive research by the International Labour Organisation, the World Bank and the academic research community.

In designing our minimum wage policy and in setting the initial level, we have taken account of all the lessons learnt elsewhere. This research also tells us that among specific firms (for example small firms) and in specific sectors, there could be negative effects. For this reason the recommendation is for the more vulnerable sectors of domestic and farm workers, the minimum wage be tiered, which means these workers will initially earn less than the R20 a hour but will catch up over a specified time.

A lot of thought has also been given to an efficient and effective exemption process so that firms, including small firms that genuinely cannot afford to pay these wages, will be given an exemption for a set period. A key issue is the effectiveness of the process to allow firms to adjust to a minimum wage in a manner that does not significantly disrupt their operations. This is why the level of the minimum wage, at R20 a  hour, has been in the public domain for about two years now, and firms have been steadily adjusting to this level.

Also, all households in SA have been affected by our economic problems — the lack of economic growth, corruption and state capture, and by the difficulties in our fiscal position. Poorer households have been hardest hit. The introduction of a  national minimum wage will positively affect precisely these households. Women, particularly, are disproportionately represented in the poorest households and in the most vulnerable jobs. The power dynamics in the labour market — as in the rest of society — have a specific dimension that makes poor women, the majority of whom are black, more vulnerable.

Increases in wages for vulnerable women and improvements in their bargaining power will have significant effects on their lives. Transforming the lives of these women is the most important step in building a more equitable society. Equally important is the fact that transforming the lives of women generates positive effects for other vulnerable members of our society.

Finally, SA has the highest income inequality in the world, with the richest 10% of South Africans owning 95% of all wealth. The richest 20% of households’ share of total consumption is above 60%, while the share of the poorest 20% is just 4%. Within the labour market itself, wage inequality in SA is extremely high. In the long term, this is both economically and politically unsustainable. In fact, many of our current economic and political difficulties are symptoms of these growing levels of inequality.

• Prof Valodia chaired the advisory panel on the national minimum wage, Francis was the researcher for the panel, and Jurgensen managed the process at Nedlac.

NATASHA MARRIAN: ANC in last chance saloon as a party that champions...
Next Article