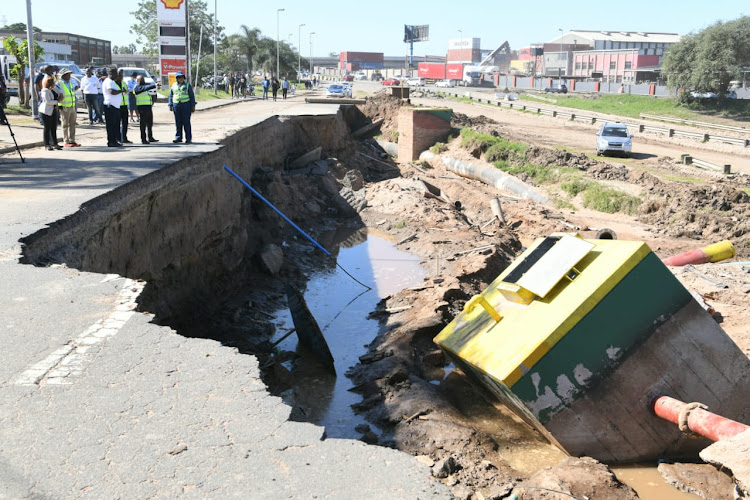 Some flood-hit areas in Durban still have no access to water or are battling with an irregular supply.

KwaZulu-Natal premier Sihle Zikalala said during a media briefing on Tuesday that while water and electricity had been restored in many areas, “some localities in urban and rural areas are still experiencing irregular or no running water”.

Zikalala addressed the media after a site visit to view the progress of repairs to infrastructure south of Durban.

Zikalala said repairs to the south coast pipeline had been completed and residents were able to access water up to Umkomaas.

“Our teams have worked throughout the night to finalise repairs on the pipeline that supplies water to Prince Mshiyeni Hospital and surrounding areas. They have assured us this pipeline will be able to supply water by the end of business today.

“Government is attending to all service delivery complaints reported and we urge community members to be patient and desist from blocking roads as this delays the full restoration of services.”

Zikalala, accompanied by a delegation of governmental officials, visited  the Durban South water aqueduct and the Rossburgh testing and licensing centre, which has been temporarily relocated due to flood damage.

“The purpose of these visits has been to assess progress in returning critical infrastructure back to normal.

“On the N2 in uMkhomazi and Umgababa, the SA National Roads Agency (Sanral) has commenced with temporary construction of a detour within the N2 space. This will allow flow of traffic from the south to the north, which has been blocked since the floods. Sanral estimates the construction of the detour will be completed by Friday.

“This will soon be followed by permanent construction of the damaged roads, which Sanral will pronounce on shortly,” he said.

Zikalala said power has been restored to many areas, including in the south, north and west of Durban.

He said the construction of temporary residential units was under way for displaced families.

“Throughout our districts and eThekwini, we are clearing temporary shelters such as halls and other government buildings as we return communities to their homes or temporary residential units (TRUs).

“While we continue with the construction of TRUs, our focus is to accommodate more than 4,396 families in halls, churches and schools. Although government has reprioritised R1bn towards disaster relief interventions, we need more than R1.9bn to complete our work.”

To date, search and rescue teams have attended to 542 calls, recovered 62 bodies and rescued 164 people, he said. “As of today 19,113 households have been affected by the disaster in which 128,743 people were affected. Sadly, 435 people lost their lives and 63 are reported missing.”

He said some families were missing and scores had been injured. “A total of 6,814 people are homeless.”

Regional secretary Musa Nciki believes eThekwini can retain two positions because of its scale, however the region has yet to suggest officials
Politics
3 weeks ago