National Assembly to hold first sitting since lockdown next week 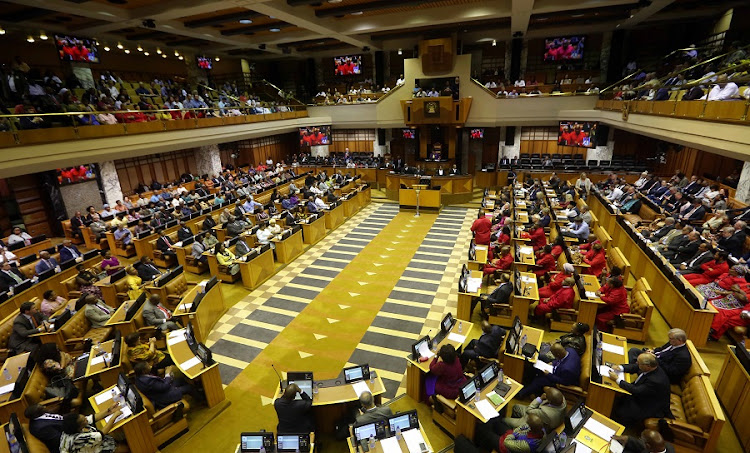 The National Assembly will have to overcome logistical challenges to enable 400 MPs to participate in a three-hour question and answer session with ministers in the social service and governance cluster next Wednesday.

It will be the first sitting of the house since it went into recess in March ahead of the lockdown under the National Disaster Management Act to curb the spread of the new coronavirus, and most MPs will participate virtually in the hybrid meeting.

The questions to be posed to ministers relate to what the various departments have been doing to deal with the Covid-19 pandemic and its effects on communities. Questions have been asked of the ministers of health; higher and basic education; human settlements, water and sanitation; public service and administration; and co-operative governance and traditional affairs, among others.

It was decided that the leaders of political parties will indicate which of their MPs will be able to be present physically in the National Assembly on Wednesday. The chief whip’s forum decided on Wednesday that 50 MPs be allowed to physically attend, however, no fixed number was decided on by Modise.

Seating of MPs present in the assembly hall will have to take account of the need for social-distancing.

As the lockdown prohibits inter-provincial movement, only be MPs based in Cape Town will be able to be physically present. Modise said she has sought legal advice about whether MPs are able to move inter-provincially under the lockdown regulations and has also asked this of the National Command Council.

Zoom will be used for virtual participants of the sitting as the platform allows for 500 people, whereas parliament’s licence with Microsoft Teams only permits 250. The sitting will also be broadcast live on the parliamentary channel on TV.

EFF MP Veronica Mente suggested that parliament be moved to Gauteng because so few MPs are based in Cape Town and because the city is the epicentre of the Covid-19 pandemic. The Powers, Privileges and Immunities of Parliament and Provincial Legislatures Act allows the presiding officers to designate any precinct in SA as the site of parliament.

Modise said that the EFF had been lobbying for a move of parliament to Gauteng even before the Covid-19 outbreak. She stressed that parliament would be opened incrementally, and not all staff and MPs would be allowed to return at once.

Confronted with the greatest health and economic crisis of the past 75 years, SA’s parliament has descended into a frenzy of rubber-stamping instead ...
Opinion
1 year ago
Next Article

ROB ROSE: Why you can’t accuse Mboweni of ‘ill-discipline’

EDITORIAL: Government needs a clear and quick roadmap to get SA working again

ROB ROSE: Why you can’t accuse Mboweni of ‘ill-discipline’

EDITORIAL: Government needs a clear and quick roadmap to get SA working again