The Covid-19 crisis has deepened divisions between the ruling ANC and the opposition DA. But if there were ever a time for multiparty co-operation and a shared national vision, this would be it 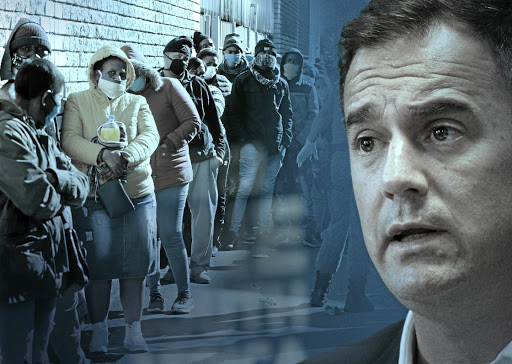 When "the end" finally arrives, there will be a reckoning. It’s an uncomfortable truth, but Covid-19 will produce winners and losers — and, other than the social catastrophe, perhaps nowhere more pronounced than in the political arena.

The history of humanity suggests that the greatest global shocks produce the most significant political and social "resets". Far-reaching social consensus can be forged from the ashes of war or the pain of pandemic.

After World War 2, societies across the world wanted their governments to rebuild, but also to create social safety nets to protect the vulnerable. They wanted governments to co-operate more, to prevent a repeat of the global conflagration. From this emerged the UN and Bretton Woods institutions, as well as the Universal Declaration of Human Rights and the international legal order of norms and standards that has evolved over the past 70 years.

No-one knows how the post-Covid world will shape up. But, as Discovery CEO Adrian Gore pointed out in these pages last week, "epidemics and wars foster innovation focused on society’s welfare and cohesion — a result of the intense social solidarity that emerges from collectively experienced hardship".

While governments — and especially their executive arms — tend to be centre stage at a time of national crisis, it is not always the ruling party that reaps the political benefit once the moment has passed.

So, in 1945 Britain it was not the "great" wartime leader Winston Churchill who won the post-war election, but reform-minded opposition leader Clement Attlee. A handsome victory gave his Labour Party the mandate for wholesale social change — from which emerged the National Health Service and the welfare state.

Far-sighted opposition leaders will be thinking not just about how to hold governing parties to account during the crisis — as they must, by asking constructive yet penetrating questions — but also about what sort of society people will want afterwards, and how they can offer a compelling vision to deliver it.

Which brings us to SA’s opposition and, because the smaller parties are almost nowhere to be seen or heard, the DA.

In the party’s "announcement of national importance" on May 8, delivered by interim leader John Steenhuisen, the target was clear: the hard lockdown and governance model. The solution, however, was not.

Many of the criticisms of the rationality and clarity of the government’s lockdown exit strategy are justified. And it is understandable that Steenhuisen should take a shot at the apparent intransigence of the ANC in sticking to the "hardness" of the lockdown, given the harm that is being done to the economy. But what is surprising is that his primary message — "end the lockdown" — is just as extreme, not least because it appears to represent a confusing and contradictory flip-flop in the DA’s own policy.

For example, the DA’s self-dubbed "smart lockdown" still envisages, at its "soft" stage 3, a lockdown on social movement, the restricted availability of consumer goods, limitations on business operations and a ban on funeral gatherings of more than 10 people.

Steenhuisen did attempt to clarify this towards the end of his speech, referring to the DA’s "smart lockdown model", but very vaguely so. The more prominent political messages were that the "virus is less dangerous than we thought" and, therefore, that the "lockdown must end".

It’s not the first time Steenhuisen has adopted such an inconsistent approach. After supporting the initial lockdown, he came out blazing against the decision to extend it by two weeks. Again, the primary message was to oppose the extension, when really it appeared that the party essentially agreed with the move, but proposed a slight variation of it.

Much like Keir Starmer, the newly elected leader of the British Labour Party, Steenhuisen has to entrench his leadership and establish his credentials and "leadership brand" (perhaps more so as an interim leader), and so he may be succumbing to the temptation of formulating a more dramatically opposed policy position than the complexity of the crisis demands.

Subtle, technical points of difference just don’t sell as well as extreme and controversial opposing views. These can be blown up into sensational headlines and generate circulation in the polarised terrain of modern digital political communication.

Regardless of the underlying motive or wisdom, the battle lines have now been drawn in very clear, thick ink.

Who will come out tops and pits in SA’s pandemic politics?

The problem for the DA is that the party has, intentionally or not, become the poster child for opening up the country. And that may come back to bite if the virus hits SA with anything near the force expected in the worst-or even base-case scenarios.

This risky political approach is intensified by the recent assertions from some DA leaders that the virus isn’t as dangerous as initially feared — prompting, in turn, accusations that the party’s position is informed by eugenics rather than medical science.

Some mistakenly read too much into the early death rates reported during the peak of the virus in Italy, for example, where the drain on the health-care system didn’t give the country the time or capacity to adequately test the asymptomatic population, thus exaggerating the reported death rate.

Those who had studied the virus since its inception knew that the fatality rate was likely closer to the 1%-2% mark. But this not an insignificant number, and it makes Covid-19 the danger that it is, particularly in view of its extreme contagiousness, its impact on the health-care system, the vulnerability of the poor and immune-compromised, and the reported long-term effects on those who have survived infection.

Those parameters haven’t really changed. So the DA’s messaging on what to do with the lockdown has been at best unclear and at worst gung-ho.

As a result, its approach is attracting heat and attention — but maybe not so much light. And this at a time when level heads and constructive, solution-orientated engagement are needed to reduce divisions and build a stronger sense of national unity and purpose.

This is the "prevention paradox".

Conversely, the worse the virus gets, the better it may look for the ANC because the DA’s calls to end the lockdown will seem insensitive and inhumane.

Neither party can know exactly where the perfect balance is to be found. So, in the absence of certainty, both seem to be erring on the side of the perceived primary interests of their respective bases.

The lockdown realities of the two bases are worlds apart and so, increasingly, are the parties’ positions on the lockdown.

In this sense, responding to the pandemic is not just political but ideological. Left-of-centre parties will be more comfortable with a centralist, highly interventionist approach from government. Right-of-centre parties will instinctively push back against "nanny state" control, and want people to take responsibility for their own actions and health.

So, the response is now acutely divided. But it needn’t be so. When two parties appear to differ so radically, it is usually a sign that a better, more pragmatic solution is to be found somewhere in the middle. In this case, that will be between the rigidity and escalating irrationality of the government’s lockdown, and the increasingly libertarian attitude of the biggest opposition party.

At the start, there were attempts to create a multiparty dialogue, but the ANC has increasingly closed ranks and locked power in at the centre.

Despite many weaknesses, the ANC has lots of very good people. Similarly, despite several empty vessels and bizarre smaller parties, the opposition space is also well stocked with good people and fresh thinkers.

Not since the Multiparty Negotiating Forum of the early 1990s has there been a greater need for cross-party dialogue and consensus-seeking in SA. In other countries, such as Belgium and the Netherlands, cross-party co-operation has helped build national unity to confront the pandemic.

This may be the moment for the ANC leadership to "reach across the aisle" — for example by inviting some opposition (and civil society) leaders to join the government’s decision-making processes (including the national command council, or NCC).

The ANC should retain its ultimate authority and control, given its democratic mandate. But a constitutional democracy also requires that the interests of the more than 42% of South Africans who didn’t vote for the ANC are put forward in coming to these era-defining decisions. This cannot be done while the NCC closes ranks, and with parliament’s teeth seeming blunter than before.

If Steenhuisen fails to take the proffered hand, that will be on him. Both sides need to recognise that the longer-term credibility of SA’s two biggest parties is under threat. They need to rethink their approach swiftly, lest a much worse situation takes root — occupation of the vacated space at the centre by far more dangerous extremism from the flanks.

The DA, in particular, needs to think about what will come after the crisis has passed, rather than short-term political "wins".

The government’s sometimes questionable rationale around lockdown regulations is corroding the social compact that is needed to manage the ...
Features
1 year ago

Ramaphosa, Gordhan and Patel have a vision for a new SA – but a wasteland awaits them if they do not get more economic activity safely going
Opinion
11 months ago
Next Article