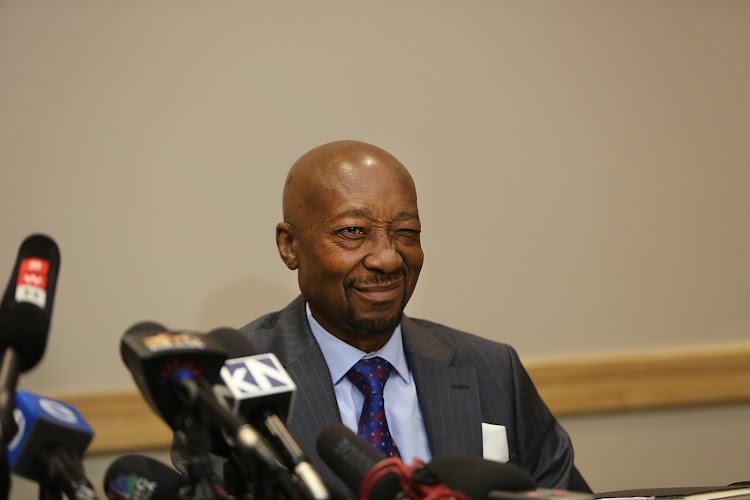 Suspended South African Revenue Service (Sars) commissioner Tom Moyane allegedly provided a hit-list of senior officials he wanted suspended without due process to his then enforcement manager‚ along with another list of replacements he wanted in their place.

These revelations were made by chief officer for governance at Sars Hlengani Mathebula‚ who served as enforcement boss in 2016 when the request was said to be made. He was speaking in front of retired judge Robert Nugent’s commission of inquiry into Sars on Friday.

Mathebula said he refused the request. “My working relationship with [Moyane] started off the same way as most: cordial‚ full of enthusiasm‚ optimism and good will. In May 2016‚ various developments ensued which soured the relationship between myself and the commissioner. I expressed a different opinion‚ which was seen as opposition and sometimes betrayal. Resultantly‚ various investigations were instituted against me.”

“I wasn’t comfortable to investigate people without information and simply being given the names. [Moyane] came to me with names of people he wanted me to appoint in positions. I had discomfort around the process that I could just appoint them. The commissioner was unhappy about that‚” Mathebula said.

On the hit list were veteran investigators such as Kumaran Moodley and Yousuf Denath‚ who were probing high-profile individuals in the tobacco industry. Moyane allegedly wanted controversial figures such as Yegan Mundie and Gobi Makhanya to be appointed in key positions.

Nugent and his team grilled Mathebula on a memorandum he had signed in the same year to investigate and institute disciplinary processes against Moodley and Denath, based on information from Mundie, alleging that they were colluding with British American Tobacco (BAT) to intimidate and harass competing tobacco dealers.

However, this memorandum came after the State Security Agency handed information to Sars pertaining to an intercept of Mundie talking to a tobacco smuggler‚ in which Mundie allegedly provided information on the smuggler’s rivals. Denath brought this to the attention of Mathebula and Moyane‚ but it was never acted on. Instead‚ Denath was suspended.

Mundie handed the memorandum to Mathebula for his signature and recommended that a case be registered with the police‚ disciplinary action be taken against the Sars employees, and a new team of auditors be appointed to assess BAT. It was Mathebula’s signature that triggered a “sham” investigation into Denath.

Mathebula was also made to account for signing off on a new intelligence unit‚ a task-team to investigate illicit tobacco trading, and the involvement of Sars officials in various syndicates‚ which has been dubbed the “new rogue unit”.

The commission previously heard how the unit‚ which reported directly to Moyane and was headed by Mundie‚ was used to target senior Sars officials.

Mathebula said that although he signed off for the establishment of the team‚ it reported directly to Moyane. He also approved the team using a safe house and monitoring equipment‚ similar to that afforded to the high-risk investigation unit‚ later dubbed the “rogue unit”‚ which was deemed unlawful by Sars only a year earlier.

“There was no equipment that I authorised to be purchased. There was never a safe house that was ever utilised. In the initial memo there were a lot of things I had read about in the media similar to the rogue unit. I asked it be changed drastically. The safe house was an oversight‚” Mathebula said.

He further alleged that Moyane pressured him into signing the memorandum for the team. Mundie‚ who was appointed fraud and investigations manager‚ resigned under a cloud earlier this year after being suspended on allegations of misconduct.

Nugent inquiry told of move to ‘refresh’ tax agency, based only on publicly available information
National
3 years ago

Sars advisory board took word of Moyane and Makwakwa when ruling ‘rogue unit’ ...

Sars advisory board took word of Moyane and Makwakwa when ruling ‘rogue unit’ ...