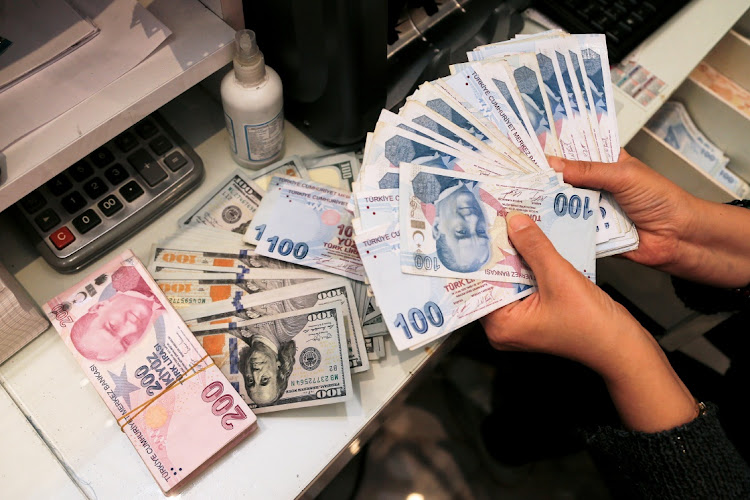 Ankara  — Turkey's lira plunged nearly 4% to a new record low of 10.45 to the dollar on Tuesday, prompting some analysts to warn of another currency crisis due to a central bank seen as bowing to political pressure and slashing interest rates.

The lira has shed nearly 29% in 2021, the worst performer in emerging markets (EM), mainly on investor concerns about President Recep Tayyip Erdoğan’s influence on monetary policy and what many call a premature and risky easing cycle.

The currency pared losses to 10.3 against the dollar by late afternoon, on track for its worst day in a month.

The central bank has cut its key rate by 300 basis points since September, when the sell-off accelerated, and is expected to lower it to 15% from 16% this week, according to a Reuters poll.

Inflation has meanwhile risen to near 20%, four times the official target, eating deeply into the earnings of Turks along with the sharp currency depreciation. Lira weakness, in turn, stokes prices via Turkey’s heavy imports.

“There is a growing risk that the central bank’s continued obedience to pressure from President Erdoğan for interest rate cuts results in sharp and disorderly falls in the currency over the coming days and weeks,” said Jason Tuvey, senior EM economist at Capital Economics.

The central bank has defended its independence and said price pressure is temporary. In October it stressed the need to address current account deficits, prompting opposition politicians to claim the government is sacrificing the currency.

Erdoğan frequently calls for lower rates to boost the economy, including exports and jobs. He has rapidly overhauled the bank’s leadership, including firing another three monetary policy committee members last month.

“The central bank’s hands are tied. It is carrying out the palace’s orders,” said Kemal Kilicdaroglu, leader of the main opposition CHP Republican People's Party. “This is their target: for the lira to erode,” he said.

The lira is down about 34% from mid-February, when it touched 6.9 to the dollar on expectations of tight policy under former central bank chief Naci Agbal. Erdogan, a self-described enemy of interest rates, replaced him with Sahap Kavcioglu in March.

Analysts are split on what level of lira depreciation would prompt the central bank, and Erdogan, to pause the monetary easing. Last month the bank’s policy committee said there was less space for rate cuts before year end.

Erik Meyersson, Stockholm-based senior economist at Handelsbanken, said on Twitter: “We can officially call it a currency crisis now” given the exchange rate has fallen more than 25% year on year.

Turkey’s currency crisis in 2018 led to a recession and subsequent below-average economic growth that was worsened by the coronavirus pandemic.

While the economy is expected to grow nearly 10% in 2021 on strong manufacturing and exports and a rebound in tourism, the lira devaluation drives up companies’ cost of servicing its foreign-currency debt.

Dennis Shen, director of the sovereign and public sector at Scope Ratings, called this a “severe problem” given the private sector’s net $124bn in foreign liabilities and the government’s 58% foreign outstanding debt — “a share that continues rising as the currency depreciates”.

“The weakening lira is worsened by existing extensive economic mismanagement, driven by (the) consolidation of power of President Erdoğan,” he said.

The lira has also been hit over the last week by the dollar firming after higher-than-expected US inflation data.

Odile Renaud-Basso, president of the European Bank for Reconstruction and Development, said investors need to see a clear and credible policy framework in Turkey.

She had raised the issue of very high inflation with Erdoğan during a visit last week, Renaud-Basso said.

With inflation rearing up everywhere, money markets see hikes as a certainty
Economy
7 months ago