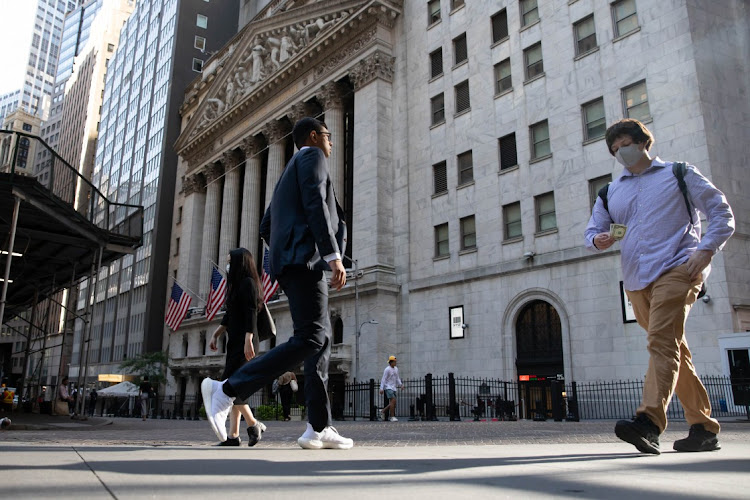 London — World share markets slipped for a third straight day on Thursday as Beijing took another swipe at its big tech firms, while bond markets steeled for European Central Bank signals later about a gradual withdrawal of its stimulus.

Europe’s regional Stoxx 600 flirted with a six-week low in early trading, while Chinese tech giants Tencent, NetEase and Alibaba had slumped 6%, 7% and 4%, respectively, overnight after online gaming chiefs were summoned by authorities to check they are sticking to strict new rules for the sector.

Analysts expect the ECB will announce a token step towards reducing its emergency economic support later.

The central bank has pulled out all the stops to prop up the eurozone through the coronavirus pandemic, but with inflation at a 10-year high and unemployment falling and as normal life resumes, policymakers are now facing a balancing act.

“The market consensus now is that there will be some ECB tapering [withdrawal of stimulus],” Rabobank senior currency strategist Jane Foley said.

Investors had initially been spooked by the idea of tapering, but ECB officials have been working hard in recent weeks to reassure markets that the process will be very gradual.

A Reuters poll expects only a slight slowdown in money printing — to €70bn a month from €80bn — still a high pace by historical standards.

“I think now the conclusion is that this will be a pretty dovish [ECB President Christine] Lagarde, which means the euro can’t get a lot of support,” even if there is a knee-jerk push higher.

In the equity markets it wasn’t just about the ECB.

The UK’s FTSE 100 led Europe’s losses with a 1.1% drop. Low-cost airline easyJet tumbled almost 14% as it tapped shareholders for £1.2bn, while the broader travel sector was down 1.8%.

The MSCI’s broadest index of Asia-Pacific shares was last down 1%, which would be its worst daily performance since August 19, the last time markets decided they were worried about the US Federal Reserve tapering its huge asset purchase programme.

US stock futures, the S&P 500 e-minis, were down 0.25% after declines from Apple and Facebook on Wednesday and after one of the Fed’s policymakers had urged the central bank to get on with its own plans to wind down stimulus.

“The global story is looking soft and it’s being hit by the Delta variant [of Covid-19] plus concern about potentially the Fed still moving towards a taper,” said Rob Carnell Asia head of research at ING. “It’s an unsettling combination of things.”

China angst had also played a big part in Asia’s declines on Thursday.

Hong Kong was among the biggest fallers. It shed 2.02%, dragged down by Chinese tech stocks after mainland authorities told gaming firms to resolutely curb incorrect tendencies such as focusing “only on money” and “only on traffic”.

There was more trouble too for the country'’ most indebted property giant, Evergrande. Media reports that the company would suspend some interest payments on loans and payments to its wealth management products hit its shares, which dropped more than 10%. Its Shenzhen-traded January 2023 bond halted after it fell more than 20%.

South Korea’s Kopsi fell 1.5%, also under pressure from regulatory scrutiny of local tech players. In Korea’s case, fintech names such as Kakao Corp., which sank 7.2%, and Naver Corp, down 6.9%, were in the spotlight.

Australia lost almost 2% after payrolls data showed a sharp drop in jobs in the first half of August.

It was calmer in the commodities markets. Oil prices were steady as production in the US Gulf of Mexico output was slow to come back on line after Hurricane Ida. Aluminium hit a 13-year high, partly in response to a coup in Guinea, one of the world’s top bauxite producers.

“Political unrest in Guinea has significantly raised the risk of disruption,” ANZ analysts said in a note. “At the same time, power shortages and environmental measures are restricting output in China.”

JSE could slide further in line with global peers

Rand strengthens to R14.20/$ for the first time in more than two months as investors mull over Tuesday’s GDP data
Markets
11 months ago
Next Article

Asian shares fall amid fears of tapering and slowing growth

Asian shares fall amid fears of tapering and slowing growth