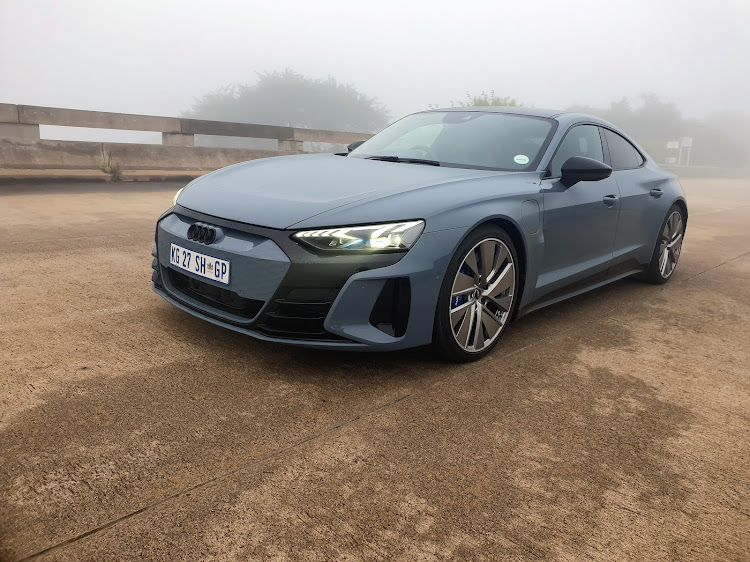 A thick mist blanketed the Gerotek test circuit when we lined up the Audi RS E-tron GT for its 0-100km/h acceleration run.

It took a leap of faith to unleash this powerful car onto the 1km straight when there was such poor visibility, but the nervousness didn’t last long. It took just 48m for this electric car to silently sweep to 100km/h.

The RS E-tron GT is the most potent electric Audi with its power output of 440kW (475kW for a short time with overboost) and torque of 830Nm, and the acceleration is mind-blowing.

The car hit 0-100km/h in just 3.2 seconds, one-tenth quicker than the factory-quoted figure, and right in the ballpark of supercars with growling V8 or V12 engines.

In this electric Audi you can whisk along almost unheard if you want, or press a button that simulates a sporty sound resembling a large petrol engine through internal and external speakers.

The instant response of electric power thrusts this sports coupé forward with chest-pressing g-forces, not only in a standing start but when you need to whisk past long trucks in a hurry. There are no gear changes to cause flat spots in the power delivery; it’s just a surge of lively, step-free thrust.

The RS E-tron GT is the flagship of the six-model E-tron range recently launched by Audi SA to kick-start the brand’s electric era. By 2026 every new Audi launched on the global market will be all-electric.

The four-door sports coupé is based on the Porsche Taycan as part of the Volkswagen Group’s technology sharing, and it comes in two variants: the GT quattro with outputs of 350kW/630Nm, and the RS halo model that’s the first electric Audi to wear the “racing sport” high-performance badge.

Along with its supercar-like acceleration the RS has a 250km/h top speed, and its high-voltage 93.4kWh battery enables a claimed range of up to 472km on a single charge.

Of course, during high-performance testing the battery drains quicker than a keg at a beer festival. Still, the test car delivered a respectable 347km range, which means that if your daily commute is under 70km you’ll only need to charge the car once a week.

Range anxiety isn’t too much of an issue unless you’re planning long trips. On a public 150kW DC fast charger the electric Audi can be juiced up in as little as 30 minutes, or fully charged at home overnight with the supplied cable. 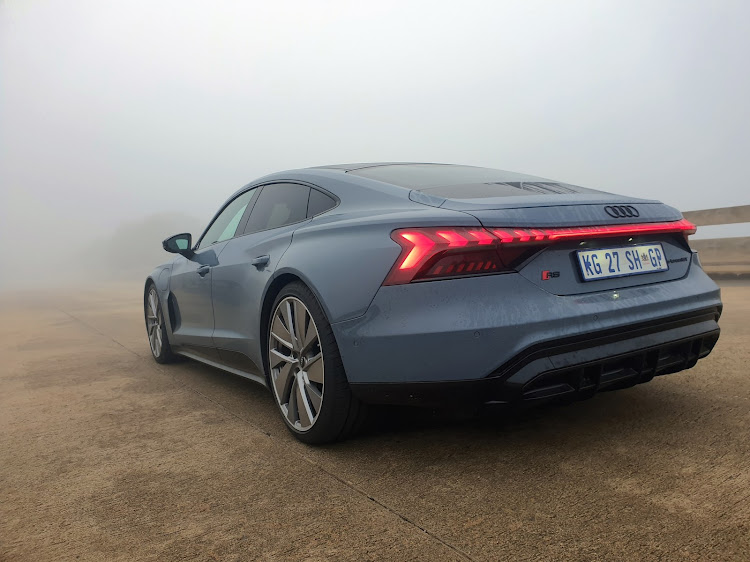 The RS E-tron GT recuperates energy under braking but doesn’t have as prominent a braking effect as some other EVs when you lift off the throttle. It coasts normally, though the steering wheel paddles can be used to set a stronger level of recuperation.

This grand tourer is a heavy car that does a good job of masking its weight in both straight line speed and handling. It may not scamper through corners with the light-footed nature of an Audi S3, but you would also never guess it weighs 2.4 tonnes.

With the adaptive air suspension on its softest setting this Audi rolls along with an impressively smooth ride, but doesn’t wallow in the corners. It hugs the road with a pressed-down feel. The wide tyres are grippy, while quattro drive and electronic stability control prevent aggressive throttle jabs from turning into expensive tyre smoke.

As per its grand tourer designation, this 5m-long car is a roomy four-door with all the luxury mod cons. Rear headroom is a little restricted due to the low-sloping roof, but there’s legroom aplenty for four adults.

There’s a large 350l boot if you remove the full-sized spare wheel that occupies the load bay (there’s no space for it under the floor), while the rear seats flip down to make this a practical family supercar. There’s another 81l luggage bay under the bonnet.

The cabin blends leather-lined luxury with sporty suede door coverings, along with the digitised screens that are de rigueur. The car doesn’t have the troublesome haptic controls of some Audis, which fail in their quest to blend the best of the digital and analogue worlds. In the RS E-Tron GT it’s either icons or physical buttons, which makes for less distracted driving. 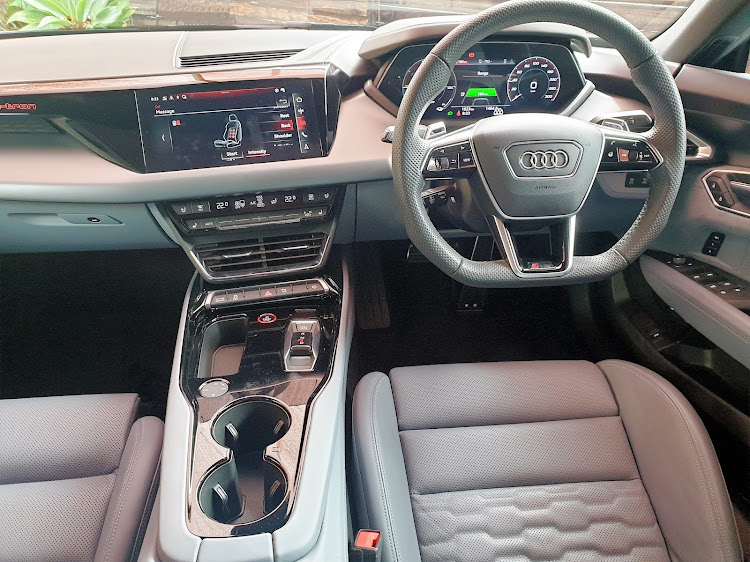 A supercar with all the luxury modcons and space for four. Picture: DENIS DROPPA

German brands are known for skimping on standard specifications and charging extra for the cool toys, but the RS E-tron GT is stuffed with gadgets. These include a three-zone climate control system, electric front seats with heating, 360° cameras, lane departure warning, navigation, wireless smartphone charger, a Bang & Olufsen premium sound system, Matrix LED headlights and a panoramic glass sunroof, to mention a few.

Someone paying R3.3m for a car is unlikely to quibble about running costs, but the RS E-tron GT is a lot cheaper to run than a petrol Audi with equivalent performance — up to five times less if you’re charging at home (see charging and costs below).

Mzansi is still a long way from having its roads filled with electric vehicles, what with their high prices and Eskom’s woes. But a luxurious, planet-friendly grand tourer like the Audi E-tron GT can be appealing to early-adopting one-percenters with its silent, supercar-like performance.

There are ten E-tron dealerships comprising three outlets in Johannesburg, three in Pretoria and two in both Cape Town and Durban, with some dealers offering free charging.

Audi has bundled a free home charger with an industrial plug (CEE) to all E-Tron owners, covering the installation cost of up to R5,000. This charges the car in about 13 hours.

To fully charge the Audi RS E-tron GT from empty based on the test car’s 24.2kWh/100km average consumption would cost about R670 on a DC charger, R536 on an AC charger, and R250 at home. For reference, a high-performance petrol Audi like the RS6 Avant will cost R1,647 to fill up.

EVs remain an expensive luxury, but improved range and charging times are making them more practical to own
Life
2 months ago
Next Article

Wanted Online: New Rolls-Royce Ghost crosses to the dark side

Wanted Online: New Rolls-Royce Ghost crosses to the dark side