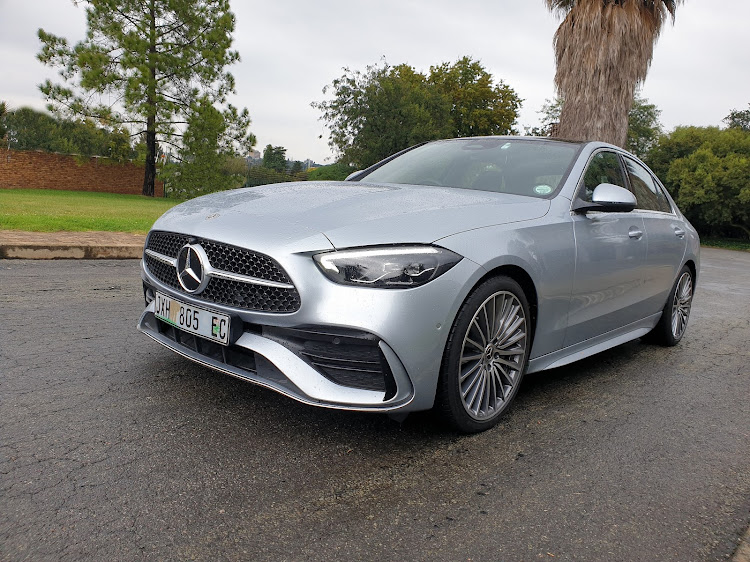 The new C-Class has the feel of a downsized S-Class and brims with luxury, technology and driver appeal. Picture: DENIS DROPPA

It was an interesting coincidence to drive an old 1985 Mercedes-Benz 380 SEC back to back with the new C200, as both have identical 150kW and 300Nm outputs.

Four cylinders, 2,300cc and 37 years separated these two Benzes across the generational chasm, and the Teutonic time warp underlined how downsized, hi-tech engines have taken hold in the modern era.

The normally aspirated Benz 380 took eight cylinders and 3.8l to produce the same power as the new C200’s four-cylinder 1.5l turbo engine — in fact the C200 has an edge as it produces up to 165kW with the aid of its 48-volt mild hybrid system.

The new W206 (Merc’s internal code for the C-Class) is the latest generation of the German brand’s best-selling model range and is produced locally at the Mercedes-Benz SA East London plant in a R10bn investment. Mercedes will continue with the downsizing trend when the high-powered C63 AMG models arrive later with turbocharged 2.0l four-cylinder hybrid powertrains, ending the era of growling V8s.

The latest C-Class still nods to tradition by being a rear-wheel drive, but this too hasn’t escaped the technology train by adopting rear-wheel steering for the first time. The optional feature effectively lengthens the wheelbase for high-speed stability and tightens the turning circle for low-speed manoeuvres and parking.

But back to that 1.5l engine, which is paired with a nine-speed automatic transmission, five more cogs than the old-timer Benz 380.

Such a compact motor seems more suited to a small hatch but it leaves no unsatisfied power cravings in the midsize Mercedes C200. It’s a perky performer that gets into its powerband quickly, without succumbing to turbo lag. The C200 cruises the open road effortlessly and takes scant notice of hills, while producing relatively spirited overtaking pace.

The only blot is the anodyne four-cylinder engine sound, and a purring V6 or V8 seems a more comfortable fit inside an executive car. That said, it isn’t buzzy like some small engines, and it has a little acoustic venom when Sport or Sports+ modes are selected.

The modes also affect throttle and gearshift responses, as well as the steering feel, while Agility Control suspension automatically adapts itself to road and driving conditions, softening and stiffening as needed to deliver both good ride and handling.

Better than good handling, in fact, and this is the most dynamic non-AMG C-Class I’ve driven. There’s a real driver’s car lurking beneath that innocuous C200 badge, and you feel it the first time you turn the impressively sharp steering. It’s been a while since Mercs had a remote, woolly feeling, but this pointy C-Class takes it to a new level and it revels sweeping through twisty roads.

No doubt the test car’s optionally fitted sports suspension and rear-wheel steering contributed to its fleetfootedness, and enthusiast drivers would do well to tick these boxes.

The car feels lighter than its 1,650kg, and shrinks around you despite its dimensions having grown over its predecessor in every dimension except height.

At 4,751mm it’s 65mm longer than the preceding model and the cabin has comfortable room for four tall adults. Luggage capacity remains at a generous 455l, and expands by folding the rear seats down at the press of a button. The uncluttered dash is dominated by the giant floating display of the second-generation MBUX multimedia system. Picture: DENIS DROPPA

The haptic feedback slider controls on the steering can be slow to respond if you don’t apply the right pressure, but for the most part the digitisation is user friendly. Swiping your way around the giant MBUX infotainment screen is mostly intuitive, while there are physical quick-access buttons for oft-used features including audio volume.

An onboard assistant is activated by voice control, and upon exiting the C200 a friendly female voice informs you if you’ve left your phone inside the car.

The new C-Class has impressive solidity and refinement, along with a smooth ride despite its low-profile 19” tyres. The whole experience feels very upper class, and apart from the slight engine drone the car is hushed.

It has the feel of a downsized S-Class and is a brilliant package brimming with luxury, technology and driver appeal. At R918,056 the C200 is priced relatively high in its segment however, and that’s without options.

Apart from the aforementioned sports suspension and rear-wheel steering, you have to cough up extra for items like powered front seats, navigation, wireless charging, a 360 degree camera, and sporty AMG line interior. 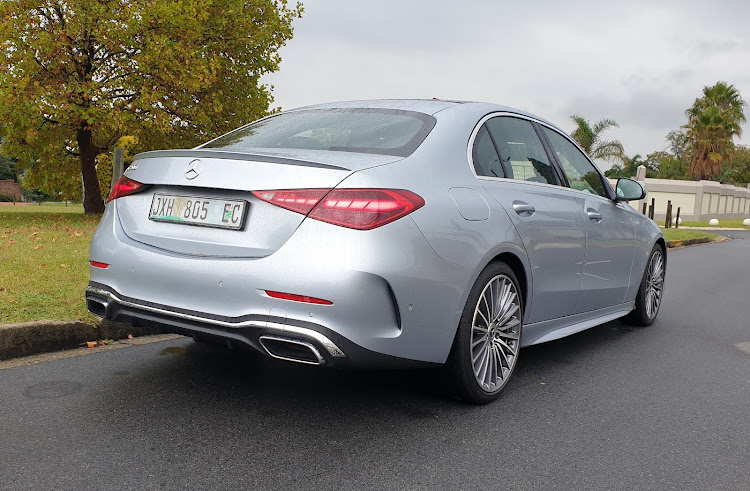 Outsold by its peers, model fights back with updated infotainment and fuel-saving technology
Life
1 year ago

BMW M440i is dashing but divisive

If you’re not put off by the giant nostrils, the Gran Coupe is the pick of the 3 and 4 Series line up
Life
1 month ago