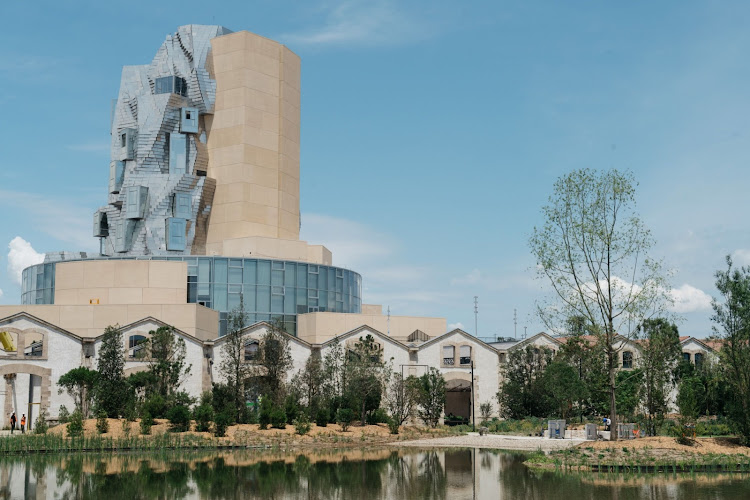 Luma Arles, an 11ha “creative campus” funded by the Swiss pharmaceutical heiress Maja Hoffmann, opened to the public on June 26, marking the culmination of a seven-year building process.

Set within a former railyard and factory area known as the Parc des Ateliers near the heart of Arles, the campus includes a group of industrial buildings that were renovated by architect Annabelle Selldorf, a 4ha park designed by landscape architect Bas Smets and, dwarfing everything else, an 11-level tower (two below ground, nine above) designed by “starchitect” Frank Gehry, which covers roughly 98,500m².

“There wasn’t the space to go horizontal,” says Gehry, in an interview. “We made about 50 models of it — we had two towers at one point, because the programme seemed to divide itself, but in the end all that got baked into one tower.” 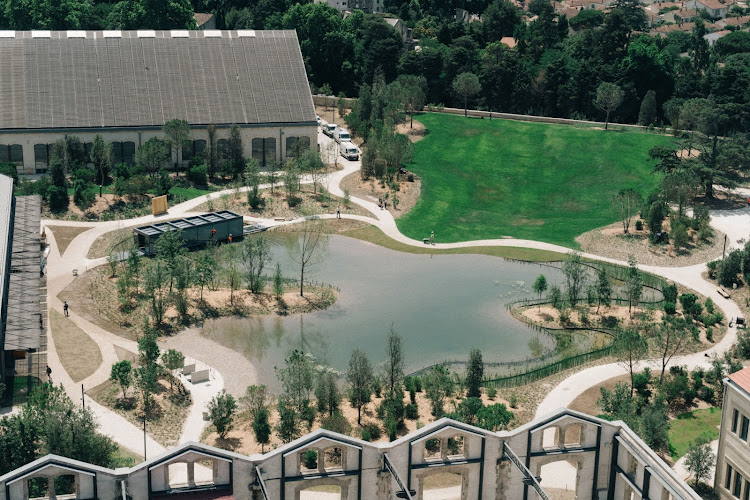 A view of the park from the tower. Picture: BLOOMBERG/JEREMY SUYKER

The campus, which reportedly cost $175m to build, is intended “to create a space that would help artists create and produce”, says Mustapha Bouhayati, CEO of Luma Arles. “It’s a multiplicity of buildings that offers diverse capacities and a diversity of conditions” in which artists can make art. Hoffmann will host yearly artists in residence.

It’s also a space where that art, plus Hoffmann’s existing collection and curated exhibitions made up from loans, can be shown in galleries that Bouhayati says are “up to international museum standards”.

But the centrepiece of the park is Gehry’s glistening tower. 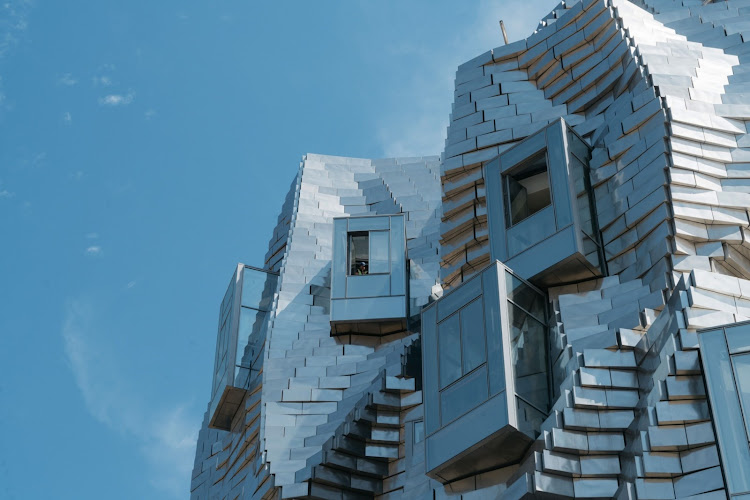 Residential property on the skyline as viewed from the Luma tower. Picture: BLOOMBERG/JEREMY SUYKER

“I looked at all the Roman buildings in Arles, and I was so fascinated by ‘How do you make a new building that kind of talks to all of that and isn’t decorative?” Gehry says. “I wanted to get to that kind of aesthetic toughness.”

His solution was a cascade of 11,000 hollow stainless steel blocks intended to reference the masonry construction of surrounding Romanesque buildings. 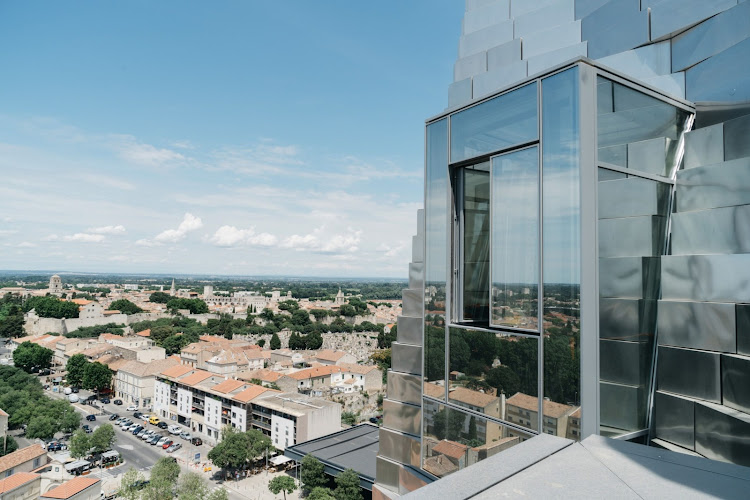 “We started playing with those panels out in my backyard at the office,” Gehry says. “We set them at different angles so the sun could reflect them. It was quite beautiful, and a moment of excitement.”

At any point in time you’re not getting the same reflection. From morning until night, the facade changes. It has a life of its own.

When they tried the panels in Arles, he discovered that “it captured light from many different directions, so at any point in time you’re not getting the same reflection. From morning until night, the facade changes. It has a life of its own,” Gehry says.

As a bonus, Gehry found that “the greatest thing was that at night, it reflected the night sky”, he says. “You caught [Van Gogh]’s Starry Night colour from the painting, which is there. I didn’t invent it. [The facade] just reflected that,” he says, referring to the fact that Van Gogh painted Starry Night nearby. “When you go to Arles, you look at it differently because you can see where Van Gogh got his colours,” he says.

Gehry’s tower is built in three tiers. The first is a plinth about 7.6m high, which raises the tower from the ground and houses the foundation’s “living archive” programme, its main exhibition gallery, and its “glass room”, where artist Christian Marclay’s spectacular 24-hour film montage The Clock is exhibited. The second is a nearly 55m-wide glass “drum”, which serves as a reception area, which Gehry intended to be reminiscent of nearby Roman arenas. The tower contains offices, artist commissions and a multipurpose event space. 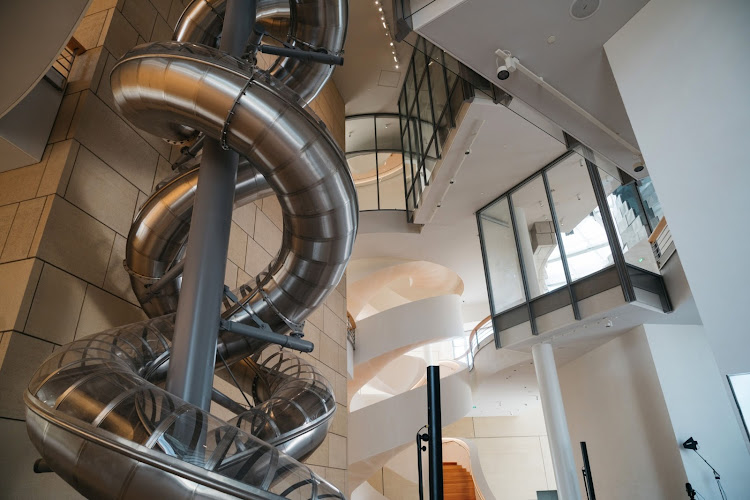 An installation of slides by artist Carsten Hoeller, inside the Drum. Picture: BLOOMBERG/JEREMY SUYKER

The building is broken into a combination of archives, exhibition spaces that include a 994m² exhibition hall devoid of columns. There is also a cafe-restaurant, a 150-seat auditorium, workshops, a library and a series of event and seminar rooms.

Not including this year’s exhibitions, there are permanent installations by artists throughout the campus. In the Drum, visitors will be able to slide down a double helix of slides by artist Carsten Hoeller; a similar installation was temporarily installed in the Turbine Hall of London’s Tate Modern in 2007.

Luma Arles is part of Hoffmann’s Zurich-based Luma Foundation, which she founded in 2004. “She decided to create some sort of vehicle that would bring together her multiple commitments with the art, environment and so on,” Bouhayati says. “And since then, she’s been interested in finding the intersection between art, the environment, education and research in any form of discipline — be it art, architecture, film and so forth.”

The point of Luma Arles, Bouhayati continues, is n’t simply to showcase art, or even create it. “It’s not always the result, it’s the research,” he says. 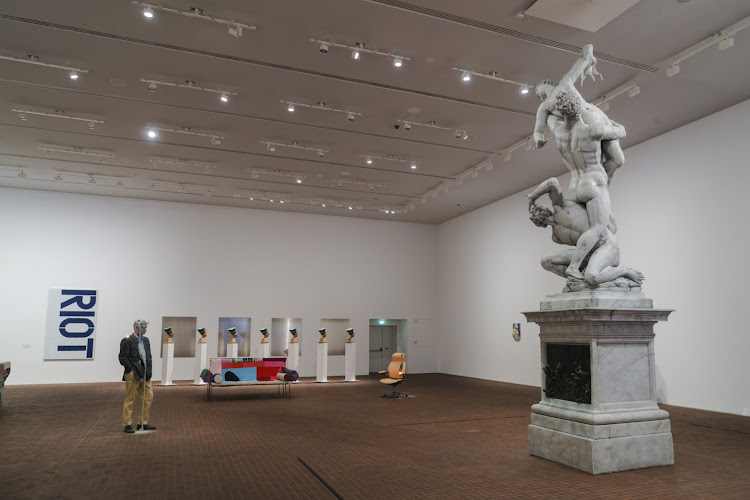 In the main exhibition hall, visitors can see Urs Fischer’s Untitled from 2011, which he produced for the 2011 Venice Biennale with the support of Hoffmann. Picture: BLOOMBERG/JEREMY SUYKER

The idea took shape after the 2007-2008 financial crisis, when “we were saying we’re going to build a production platform,” he says. “More conventional institutions were looking at us, probably with some doubt and scepticism. But we didn’t want to put a collection in [the building], the idea was to produce whatever it is we’re going to show.”

That isn’t a hard and fast rule. For starters, the opening exhibition in the main hall is composed of work from Hoffmann’s collection. Even that, Bouhayati says, is in keeping with the foundation’s mission. “For the opening show, we’re presenting a selection of artworks she’s produced over time because for us they’re relevant and resonate,” he says.

“So they are from Maja’s collection, but when she’s [helping to] produce artwork, she’s more like a project person that someone just collecting.” 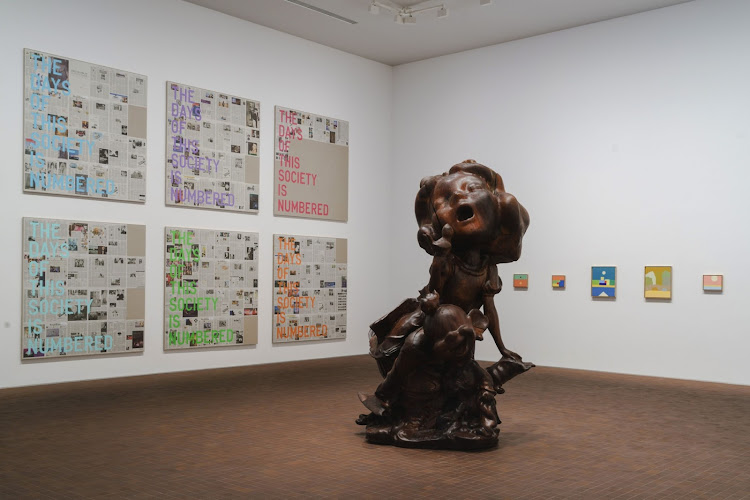 In another corner of the main exhibition hall, Paul McCarthy’s 2011 wood sculpture, White Snow and Dopey, stands in front of posters made in 2012 by Rirkrit Tiravanija and paintings by Etel Adnan created from 2010 to 2015. Picture: BLOOMBERG/JEREMY SUYKER

All of the permanent artworks, with the exception of a Franz West outdoor sculpture, were commissioned by Hoffmann, Bouhayati says. “They’re embedded in the structure of the building.”

One example is the functional Drum Café, conceived by artist Rirkrit Tiravanija and intended to make its visitors consider, or reconsider, notions of hospitality, friendship and communality. The design uses materials from the area’s bioregion, such as sunflowers, merino wool and dye from area plants; the latter two can be found in a huge, 9.7m-long tapestry Tiravanija commissioned from the Aubusson atelier.

Bouhayati declines to give an official cost for the entire project. “You can’t put a number on something that’s this holistic,” he says. “It’s something that reflects a lifetime of engagement.”

In preparation for a postpandemic reality, here is a bucket list for adventure-seekers
Life
1 year ago
Next Article