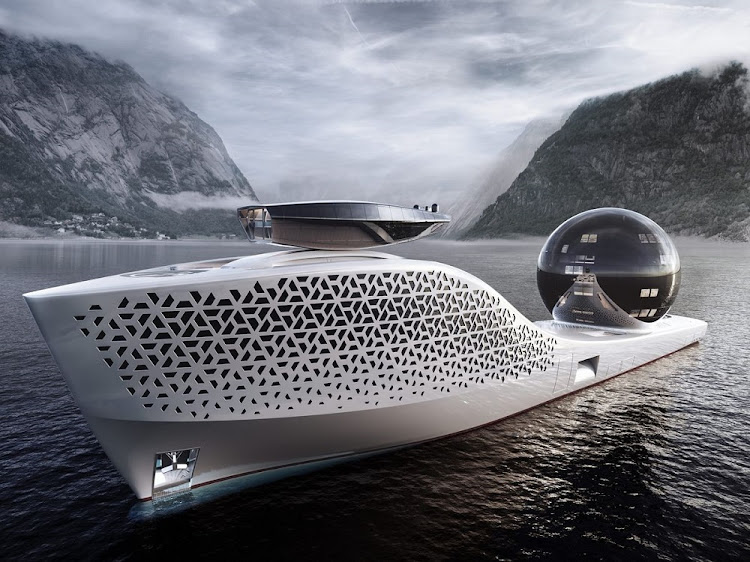 Singapore — A  nuclear-powered ship full of scientists, activists and billionaires sailing the world and examining the state of the oceans. That is the dream of entrepreneur Aaron Olivera, who believes the novel vessel will help raise environmental awareness.

The ship, called Earth 300, was designed by superyacht specialist Ivan Salas Jefferson. Almost 300m long and 60m high, it will be able to accommodate 425 people. Most of those will be staff, scientists and students, travelling for free. A handful of wealthy tourists, housed in luxury suites, will pay $3m each for a 10-day journey — helping to make the venture profitable.

At a launch dinner in Singapore, Olivera talked enthusiastically about his dream, rolling off names of entrepreneurs and politicians mixed with emotive phrases about saving the environment, inspiring the youth and furthering science. He wants Earth 300 to be a global architectural icon that encourages people to think more seriously about the climate. The modernist design, clean lines, cantilevered observation deck and 13-storey glass “science sphere” are meant to spark awe.

“We wanted the sphere to inspire whoever looks at it to save the planet,” Olivera said, in a restaurant that was once the ticket hall for ferries to Singapore’s outer islands. “Imagine if we could build an object that would galvanise people around the planet.”

He calls the ship “The Eiffel Tower of our generation”.

Beyond the hubris, there is still a long way to make the boat a reality. It has taken six years and $5m to get to this point, where the design is advanced enough to take to shipyards to work out construction quotes. Olivera said the group is considering shipyards in Europe and South Korea. Earth 300 executives estimate the total cost would be $500m-$700m. Part of the high price tag would be a zero-emission atomic power plant from UK-based Core Power, which is developing a ship-borne molten-salt reactor, a technology led by the Bill Gates-founded US nuclear company TerraPower.

With the ship scheduled to launch in 2025 and certification for the reactor not expected for another five to seven years, the vessel is likely to run initially on synthetic green fuels. Atomic propulsion may also create issues with nations such as New Zealand, which has banned nuclear-powered ships from docking since 1984.

Olivera wants the vessel’s first trip to be a circumnavigation of Antarctica, followed by an Arctic voyage. The ship would be designed to operate for 300 days a year, generating about $100m from wealthy ecotourists, with additional revenue from hosting events or movie sets, he said.

Those who pay for the 10 luxury suites with private balconies would also get accommodation for personal staff in a separate set of cabins. Another 10 suites would be made available to what Olivera calls very interesting persons — people from all walks of life who would bring a unique experience or knowledge to the voyage.

Olivera envisages inviting artists, explorers and students to spend time on the ship, hobnobbing with billionaires, but paying a lower fee, or even travelling for free. With them, working in 22 laboratories, would be about 160 scientists, who would carry out research and gather data using the ship’s equipment and thousands of built-in sensors, including what could be the first commercial ocean-going quantum computer. Olivera said the project would be “open source”, with information and processing facilities shared with other climate research efforts around the world.

At the dinner in Singapore, Olivera lined up an array of scientists and environmentalists via video links to voice their support for the venture. He says he has interest from unnamed wealthy private backers and that most of the funding for the project would be raised through traditional financial instruments.

Olivera is undaunted by the long list of challenges. He said the business plan has been stress-tested by KPMG, and 80% of the profit will be channelled to environmental causes. His priority is for the project to be “inspirational”, he said. “The future of humanity lies in ambitious projects like this one.”

NEWS FROM THE FUTURE: Around the world in 40 seconds

Wanted Online: Cool cruising: Luxury yachts with the best onboard pools, because, well, why not?

Galeb (Seagull) hosted more than 70 kings, presidents and prime ministers and played an important role during the Cold War era
World
4 months ago

This is the world’s priciest city, and it is not Hong Kong

This is the world’s priciest city, and it is not Hong Kong