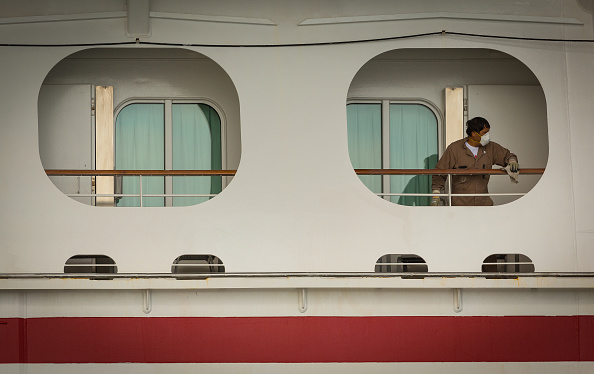 A worker cleans a handrail aboard the Carnival Miracle cruise ship anchored at the Port of Long Beach in Long Beach. Picture: /BLOOMBERG/GETTY IMAGES/TIM RUE

New York — US airports are seeing more travelers than at any point throughout the pandemic, with daily passenger volumes consistently topping 1-million. Some hotels are selling out well past their peak seasons. The pent-up demand for travel is finally materialising as movement — whether the Centers for Disease Control and Prevention (CDC) approves or not.

But one sector of the industry is still stuck in place. After a disastrous few months in early 2020, when large cruise ships became early super-spreaders for Covid-19, the CDC has kept them moored until further notice, calling cruising a level 4 (maximum) risk.

Now, with hopes for future voyages starting to ignite — certain itineraries have been selling out well into 2023 — cruise companies have more to repair than just their bottom lines. For months the industry has dealt with blows of bad press, from a poor track record with Covid-19 cases to environmental risks and overtourism issues during normal times.

Josh Leibowitz has plenty to say about all that. As the new president of Carnival’s ultra-luxury line Seabourn — he was brought into the role in the midst of the pandemic, in July 2020 — he’s awaiting his first day on the job when he can greet paying guests. It’s unclear when that may happen.

The company recently canceled 2021 voyages to at least July, including some of its most lucrative summer Mediterranean trips. While some competitors have grown impatient with the CDC and launched unprecedented, Caribbean-only itineraries to avoid its jurisdiction, Leibowitz has been a holdout, continuing to wait for the agency’s blessing before resuming commercial service.

Until then, he’s out to set the record straight about the ways he says the industry has been unfairly characterised, and why his company’s five small ships might actually be some of the safest places on Earth.

The first myth Leibowitz dispels is the idea that his ships are not operational. While they aren’t shuttling passengers to Bandol, France, or Saint-Tropez, the ships are “still operating, for the majority, with crew only”. he says. And keeping those staff members safe has been a way to pressure-test Covid-19 protocols for almost a year: “We have masks, social-distancing, UV lighting, advanced HVAC filtration, and some of the most rigorous testing in the world.”

Company-wide, he adds, there have been only “isolated cases” among those skeleton crews, all pinpointed through the “advanced testing processes” that have earned preliminary nods from the CDC.

Leibowitz thinks of the cruise industry as being in the same league as the 2020 NBA playoffs when it comes to Covid-19 safety. “If we’re all being judged on two axes — the ability to test for cases and the ability to control for them — then the NBA bubble, when it first came out, that’s the top right corner. Highly tested, highly controlled.”

The bottom left, he says, is your average grocery store, where nobody is tested and mask enforcement can be poor. Airlines are on the bottom right: good controls, no tests. “The cruise industry is the only industry in travel that is pushing itself to the top right quadrant,” he says.

Cruising isn’t actually in that quadrant alone. A large number of hotels — especially in the luxury sector — are taking it upon themselves to require guests to have a negative PCR test before arrival, even if their destination’s government doesn’t have such a requirement in place. And since the US mandated PCR tests for re-entry, most international five-star hotels have added the capacity for testing. Baha Mar, in the Bahamas, said earlier in March that it had carried out 40,000 tests since reopening in December.

But Leibowitz’s broader point holds: testing is meant to uncover the positives. And if not everyone in the travel industry is testing or tracing, then it’s impossible to know how disproportionately cruise ships have been spreading the virus. The idea that the industry is bringing bad news upon itself is what Leibowitz calls the double-edged-sword effect. “We have to step back and recognise that having hospitals and testing on board isn’t a source of reputational ill. It’s an advantage.”

There probably won’t be a vaccine rule

Seabourn competitor Crystal Cruises recently announced its own return to the sea with Bahamas-only voyages that flout the CDC by not touching the waters within the agency’s jurisdiction. Instead, that company decided to come up with its own safety rules by looking to the success of sister line Dream Cruises — which has sailed without incident in Singapore since November — and listening to what cruisers said they wanted to make them feel safe. Eighty percent said they preferred traveling among vaccinated guests only.

That’s not a rule Leibowitz is ready to employ at Seabourn. “The public-health experts are genuinely in charge,” he says, adding that while vaccines offer a layer of protection, they’re not the only way forward. “We have to see whether there are populations who are already immune and may not need a vaccine immediately — maybe they already had the disease. Or maybe they have an allergic reaction to vaccines the same way they might have an allergy to sesame. Does that mean they can’t come on board? We’re not yet at the stage where we can say this has to be the rule.”

Leibowitz says sister lines Costa and Aida have been successfully sailing in Europe mid-pandemic without requiring vaccines, and by focusing instead on “detecting, preventing, and managing”. Although both companies have had Covid-19 outbreaks on board, he says this shouldn’t be the decisive metric. “We have to move beyond whether there’s a positive or negative and train our eyes on the outcome of the event.

Did you get the R down [meaning, did you minimise spread from that positive case]? Was the affected person cared for in the best possible way? That there was a case or not on any one cruise should not be ‘game over’ for that experience,” he says.

Hotels have decided, amid the pandemic, that some business is better than none — most are operating at 30% to 40% occupancy, says industry analyst STR. For cruising, that’s not economically feasible. Break even in the seafaring sector requires occupancies of closer to 50%, depending on the size of the ship and the prices a trip can command, according to comments made in 2020 by Carnival CFO David Bernstein.

Add that cruises can’t sail to destinations where international borders remain closed, and it’s clear why cruise companies have largely opted to keep their ships in lay-up.

But Leibowitz sees a path to scaled-down operations that can make sense in the current environment. Cruises to nowhere, he says, have room to grow. “Trans-Atlantic sea days are some of the most popular days on Cunard cruises,” he says, referring to the British line best known for its two-week, ocean-crossing trips. Singapore and Taiwan have seen such success with their “cruises to nowhere”, Seabourn sister company P&O is now offering similar concepts in England.

Cruises that focus on private islands — many of which are owned by cruise companies themselves — are another option. These types of trips, says Leibowitz, would easily enable a line to extend its Covid-19 protocols to dry land. Then there’s the approach competitors are taking: bypassing US ports and departing from tourism-dependent Caribbean nations. While he has no such developments to share now, Leibowitz says Seabourn is “in active discussions with a few destinations to discuss the possibility of restarting cruises and will share more details when the time is right”.

With or without the pandemic, Seabourn is intent on delivering uncrowded experiences — battling against the industry’s reputation for dumping thousands of passengers into densely crowded ports that can’t easily absorb so many footprints. The company is building two ultra-luxury expedition ships meant to visit remote corners of the Arctic and Antarctic, from the White Continent itself to the unexplored and fjord-filled Scoresby Sound, in Greenland.

Says Leibowitz: “People want to explore in a way that allows them to enjoy nature and have less people around them.”

No quarantines will be imposed, but tourists will be required to present a Covid-19 test and stay in certified hotels
World
1 month ago

By plane or train, Lufthansa seeks to make customers greener