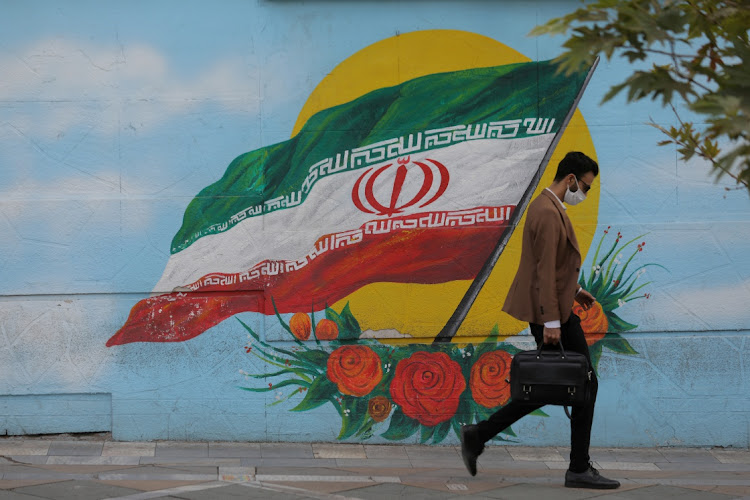 FILE PHOTO: An Iranian man wearing a face mask walks on a street after Iranian authorities made it mandatory for all to wear face masks in public following the outbreak of the coronavirus (COVID-19) in Tehran, Iran, October 10, 2020. Picture: WANA/MAJID ASARIPOUR/REUTERS

Biden said during the presidential campaign that Trump’s Iran policy weakened US national security and left Tehran closer than ever to being able to build a nuclear bomb. He vowed to get on the phone with allies on “day one” to begin rebuilding strained ties and said he’d give Iran a “credible path back to diplomacy”.

But Iran’s mid-2021 presidential election, as well as likely continued Republican control of the US Senate, will put the brakes on quick, substantive action, according to US and Iranian diplomats and analysts. In addition, Biden has signalled that his priorities starting January 20 will be on the economy and getting the coronavirus pandemic under control.

“I am not optimistic at all that in the short term anything significant will happen between Iran and the Americans,” Saeed Laylaz, an economist and former adviser to former president Mohammad Khatami, said in an interview. “It’s not impossible, but it will be extremely difficult.”

Nuclear watchdogs and security analysts aren’t the only ones focused on what Biden could accomplish: oil markets are betting on some easing of tensions by mid-2021 that will free the way for Iranian crude to return to global markets by year-end, Bob McNally, president of Rapidan Energy Advisors, said on Bloomberg TV last week.

That could still be an optimistic timeline.

On Wednesday, Iranian President Hassan Rouhani — who leaves office in 2021 after staking his political legacy and reputation on the nuclear accord reached during the Obama administration — referred to Biden as “the new man who’s arrived” and had campaigned on returning to the accord. “If they stick to their responsibilities they can choose the new path,” he said.

But uncertainty about Rouhani’s successor, and the potential that elections could lead to a much harder-line government, will probably temper Biden’s enthusiasm to get something done quickly.

In addition, while presidents generally have some leeway on foreign policy, a Senate under Republican control would mean legislators would demand assurances on Biden’s Iran policy before they confirm his nominees, said Richard Goldberg, a former National Security Council official under Trump.

“Any effort to rejoin the Iran deal and build on it will be intensely scrutinised in Congress and among domestic critics,” said Ariane Tabatabai, a Middle East Fellow at the Alliance for Securing Democracy at the German Marshall Fund.

If Biden pursues a rally-the-allies approach to Iran, that will be likely to include close consultations with everyone from Israel to the United Arab Emirates, which aren’t likely to be as accommodating as European partners.

An official with Biden’s transition team didn’t immediately respond to a request for comment.

Pressuring Biden to take the first step may be tough after the Trump administration spent four years highlighting the threat from Iran, which the US sees as sowing turmoil across the Mideast and accused of hacking US voter data before the election.

Iran’s actions since the US quit the 2015 nuclear deal — including its decision to ramp up uranium enrichment — have in some ways bolstered the Trump administration’s arguments.

The International Atomic Energy Agency said on Wednesday that Iran’s uranium stockpiles had grown eightfold since the US quit the deal, and it now had enough supply to create three bombs if it enriched the material to weapons grade. Iran says its moves are reversible if the US returns to the accord, and it has continued to host IAEA inspectors and meet other requirements of the nuclear deal.

Iran has signalled its requirements for reviving the multinational deal.

Its negotiators would want to see an authentic effort by Biden to not only scrap Trump’s approach but show that the US had a long-term commitment to the accord, said a source close to official foreign policy circles in Tehran who didn’t want to be named because of the sensitivity of the matter.

An Iranian official, also speaking on condition of anonymity, said Biden would have to return to the nuclear accord without condition, compensation to Iran would have to be on the table and the US would have to guarantee that it won’t invoke a “snapback” of UN sanctions as the Trump administration has tried to do.

Biden could take some smaller moves that would reduce the pressure on Tehran without committing the US to a full-fledged detente. He could, for instance, ease the transfer of humanitarian aid to Iran, especially as the coronavirus batters the country’s healthcare system, said Naysan Rafati, the International Crisis Group’s Iran analyst.

The US can also try to help Iran gain access to a long-sought loan from the International Monetary Fund, he added. But even that would engender heavy scrutiny by Republicans, who are wary of providing funding to a government long listed by the US as a state sponsor of terrorism.

That’s especially true now that the first of the accord’s “sunset” provisions, which expire at fixed dates, has already passed. An international ban on Iranian arms purchases lapsed in October and other restrictions built into the accord expire in less than five years.

The short time horizon of the 2015 deal between Iran and six world powers prompted Biden to say he wants to expand on the agreement, known as the Joint Comprehensive Plan of Action, or JCPOA.

Iranian officials, while broadly welcoming Trump’s defeat, have repeatedly said that the original terms of the deal can’t be renegotiated.

“I don’t see Iran being willing to walk that path,” said Adnan Tabatabai, co-founder and CEO of the Bonn-based Center for Applied Research in Partnership with the Orient, adding that Iran would be “allergic” to any mention of a “JCPOA-Plus”.

A final hurdle could still come from Trump, as his team works to restrict options for the incoming administration. The administration has been working to create a layer of hard-to-reverse sanctions that could initially hobble Biden’s efforts.

Elliott Abrams, the state department’s special representative for Iran and Venezuela, said in an interview with Bloomberg TV Thursday that the Trump administration will impose new sanctions on Iran but declined to specify which Iranian entities would be targeted or when penalties were likely.

“The Trump administration’s approach now is to add more and more threads to this spider web and hope the next guy has a hard time washing them away,” said Rafati, the International Crisis Group’s Iran analyst. “There’s very little in here that’s totally irreversible. But these are harder to undo because you have to make the case that terrorism is no longer a concern.”

The Arab Mena region, despite being among the least affected by Covid-19 in terms of confirmed cases and deaths, will suffer disproportionate ...
Opinion
9 months ago