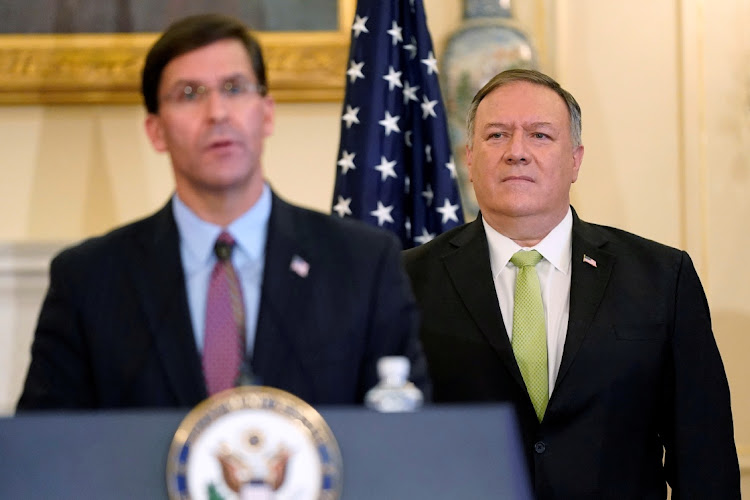 US secretary of state Mike Pompeo (right) listens as defence secretary Mark Esper speaks during a news conference to announce the Trump administration's restoration of sanctions on Iran, at the US state department in Washington, the US, September 21 2020. Picture: PATRICK SEMANSKY/ REUTERS

Washington —  US officials announced new sanctions against Iran on Monday and insisted that a raft of nuclear-related restrictions are back in force, part of a standoff with European allies that’s spurring a crisis at the UN Security Council.

Secretary of State Michael Pompeo said that all UN members are expected to enforce sanctions suspended under a 2015 nuclear deal now that the US has declared Tehran in violation of the agreement and invoked what is known as a “snapback” of the restrictions. Thirteen of the 15 members of the Security Council have said they would not recognise the move because the Trump administration quit the multinational deal in 2018.

In a show of force by the administration, Pompeo gathered with treasury secretary Steven Mnuchin, defence secretary Mark Esper, UN ambassador Kelly Craft and other top officials for a briefing at the state department to announce the sanctions.

Targets include Iran’s ministry of defence and Iranians working in support of the country’s ballistic-missile programme, as well as Venezuelan President Nicolas Maduro, who has continued to buy fuel from Tehran despite US sanctions.

Rather than lament their isolated position, the officials insisted that the US is doing the right thing.

“We don’t need a cheering section to validate our moral compass,” Craft told reporters. “We do not find comfort based solely on numbers, particularly when the majority has found themselves in the uncomfortable position of underwriting terrorism, chaos and conflict. We refuse to be members of that club.”

The briefing was scheduled for the same time as a virtual event at the Council on Foreign Relations with Iranian foreign minister Javad Zarif, who said the US was “taking retribution not against us but against the entire world”. He said Iran would have to be compensated for damage from US sanctions before considering reopening the nuclear deal.

Zarif also said it was “nonsense” to say Iran was trying to interfere in the US election, as Trump administration officials have charged, because “for us it’s not important who sits in the White House”.

The Trump administration’s bid to restore all UN sanctions on Iran now creates the odd situation where one permanent member of the Security Council — the US — insists the sanctions are back in effect, while all the others except the Dominican Republic say they are not. The administration says it had no choice but to invoke snapback because under the terms of the 2015 Joint Comprehensive Plan of Action, an arms embargo against Iran was set to expire in October.

To enforce its position, if countries such as Russia and China disregard it, the US could use tools such as secondary sanctions on shippers, insurers and banks. It could even threaten interdictions of ships at sea.

UN envoys from Germany, France and the UK said on September 18 in a letter to the president of the Security Council that the US initiative “is incapable of having legal effect” and said they will work “tirelessly to preserve the nuclear agreement”.

UN secretary-general Antonio Guterres has also weighed in on the disagreement, noting in a letter that he could not proceed in acting on US snapback demands because of the “uncertainty over whether the process” was “indeed initiated”.

Speaking at the briefing, Pompeo declined to say what action the US might take if other nations ignore the sanctions. In the past, the Trump administration has shown little reluctance to threaten companies based in allied nations if they do business with Iran. National security adviser Robert O’Brien added that President Donald Trump has signed an executive order aimed at preventing the sale or transfer of arms to Iran.

“We have made very clear that every member state in the UN  has a responsibility to enforce these sanctions,” Pompeo said. “That certainly includes the UK, France and Germany.”

Iranian President Hassan Rouhani, at a cabinet meeting on Sunday shown on state television news, called the US move a sign of “certain failure”, which only demonstrates that Trump’s strategy has resulted in “maximum isolation” for Washington.

On Saturday, the commander of the Islamic Revolutionary Guard  threatened Iran would set US military outposts in the Persian Gulf “on fire at once” if its adversary tried to start a war.

The Iranian rial hit a low on the unregulated open market on Sunday, weakening 4.6% compared with last week and briefly breaching 280,000 per US dollar, according to two currency trading channels on the Telegram messaging app.

Iran seizes UAE ship and its crew after clash at sea

If Trump is defeated in the November 3 election, the new administration’s hardest challenge will be to restore the trustworthiness of the US
World
1 year ago
Next Article