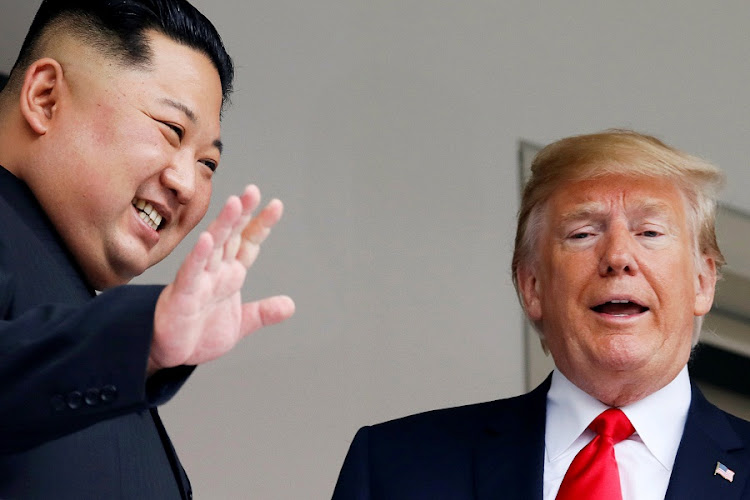 No relationship with the US changed more under President Donald Trump than North Korea’s. Picture: REUTERS/JONATHAN ERNST

London — If Donald Trump is forced from the White House in the November election, he will not be the only loser. Though many governments are likely to celebrate the end of the most unconventional and at times chaotic US presidency of modern times, others will have reason to miss it.

For the leaders of Turkey, North Korea and Israel, the ledger has been almost entirely positive. Trump’s ejection would confront them with immediate challenges.

The scorecard for countries like China is more nuanced. Even so, what the mostly authoritarian winners from Trump’s four years in office have in common is a fear his departure would spell the return of a more conventional US foreign policy.

That could result in the US mending alliances and promoting the universality of values such as democracy and human rights, or the fight against climate change.

“This president embraces all the thugs in the world,” Trump’s opponent Joe Biden said at a recent town hall event, as he sought to highlight the political divide.

No relationship with the US changed more under Trump than North Korea’s. What began with mutual threats and insults morphed into a sometimes bizarre love-in as Kim and Trump met three times and exchanged more than two dozen letters, showcasing their “mysteriously wonderful” chemistry.

Biden has said he will not meet Kim without preconditions, making any rapid lifting of the sanctions that have tipped North Korea’s economy into its worst recession for two decades less likely.

Trump set the tone for his approach to international relations in Saudi Arabia, choosing Riyadh for his first foreign visit in 2017. He was greeted by a huge image of his own face projected onto the facade of the palatial hotel where his delegation stayed.

The Saudi crown prince made important gains, above all Trump’s withdrawal from the 2015 nuclear deal with Iran. Trump offered personal support and vetoed congressional sanctions when MBS, as the Saudi ruler is known, was besieged by allegations he had ordered the 2018 murder of prominent regime critic Jamal Khashoggi.

There have been disappointments for Saudi, in particular Trump’s failure to strike back militarily after a 2019 attack on oil facilities in eastern Saudi Arabia that the US attributed to Iran.

Saudi leaders say they are confident they could navigate a transition to Biden. Still, with Trump gone a more traditional US focus on human rights is likely to return and a door could open to reviving the Iran accord.

If anyone relies more on Trump than MBS for political protection, it is Turkey’s president. Trump has stood virtually alone between Turkey and the imposition of congressional sanctions over Erdogan’s decision to buy Russia’s S-400 air defence missile system, despite being a Nato ally.

Their personal bond enabled Erdogan to persuade Trump to withdraw US troops from Kurdish areas of northern Syria so Turkey could send its own forces to take control of the zone. Trump made that decision without consulting the Pentagon or US allies in the fight against Islamic State in Syria, including the UK, France and Kurdish fighters that Turkey regards as terrorists.

With sanctions ready for enforcement and Biden previously calling on the US to support Turkish opposition parties, Erdogan may have the most to lose from Trump’s departure.

Trump has been more aggressive towards China than any US president in recent memory, slapping tariffs on Chinese goods and moving to restrict its access to technologies. Yet Chinese officials have said on balance the leadership would prefer Trump to stay.

Trump shook the system of post-World War 2 alliances that China sees as a constraint on its geopolitical ambitions, a considerable benefit. He also undermined America’s international stature by exiting agreements in pursuit of “America first” policies, creating openings for the Chinese president to fill the resulting void of leadership on everything from trade to climate change.

Beijing’s concern about Biden is that he would try to create a more co-ordinated international front in dealing with China, while maintaining the pressure on trade and technology. Even so, China might benefit from a less emotive relationship with Washington if Trump loses, according to Zhu Feng, professor of international relations at Nanjing University. “Do people really want to see China and the US enter a cold war?”

Russia’s alleged meddling in the 2016 US election produced a formal US investigation and 448-page report. But in some ways, Putin hit the jackpot. In office, Trump has questioned the value of Nato and even the status of countries such as Germany as allies, weakening a transatlantic alliance that Russian and Soviet leaders back to Joseph Stalin have sought to break.

There is every reason to think the trend would continue during a second Trump administration. Yet Russia’s president secured few of the more concrete gains he wanted, from lifted sanctions to progress on arms control. Russian officials see few prospects for a thaw, and less so under a Biden administration.

Rather than lament the anti-Russia mood, the Kremlin could try to change it, according to Fiona Hill, the National Security Council’s senior director for European and Russian affairs until 2019. “They could rein in the guys who are going around poisoning people right, left and centre,” said Hill, now at the Brookings Institute. “When they’re having meetings with us, they could not poke us in the eye. They could just stop doing all that.”

For Brazil’s president, Trump is a political soul mate. As US opinion polls have turned for Biden, Bolsonaro has grown concerned for the future of his ties with the White House, according to a senior cabinet member.

Since taking office in 2019, Bolsonaro has upended Brazil’s decades-old tradition of an equidistant foreign policy in favour of automatic alignment with the US and its allies. In return, Trump lifted a ban on fresh-beef imports, supported Brazil’s bid to join the Organisation for Economic Cooperation and Development, and signed deals for defence and space-exploration co-operation.

Foreign minister Ernesto Araujo has said Brazil would have no problem with a Biden administration, but Bolsonaro’s environmental policies would face strong opposition. Biden has suggested Brazil could face economic consequences if it does not stop Amazon deforestation.

Trump repeatedly broke with US precedent to boost the Israeli leader’s nationalist agenda, recognising Israeli sovereignty in the disputed Golan Heights and moving the American embassy to Jerusalem. Plans to annex parts of the Palestinian West Bank have been shelved, but could be revived in a second Trump term.

The real payoff came in September, when Trump brokered normalisation deals between Israel and the United Arab Emirates and Bahrain, but there has been a cost; bipartisan support for Israel in the US Congress has eroded. Many Israelis fear their country would face greater scrutiny under a Biden administration, while the security establishment worries about a US return to the Iran nuclear deal.

Outsiders among more liberal European heads of state, the leaders of Poland and Hungary have found solace in Trump. In 2017 he chose Warsaw for a speech in which he redefined the West in terms of conservative, Christian values — validating Duda’s right-wing agenda, which Hungary’s Orban shares.

The Hungarian prime minister has openly endorsed Trump ahead of the election, saying he does not want to see a return of the “moral imperialism” a Democratic administration would bring to the White House.

The two men share Trump’s disdain for political correctness in ways that could cause friction with Biden. President Duda has cast the LGBTI community as “enemies” of Polish families. In September, Biden weighed in on Twitter against Polish regions that had declared themselves “free from LGBTI ideology.”

In his comment on Trump’s fondness for “thugs,” Biden singled out Hungary and Poland, together with post-Soviet Belarus as he warned against risks to Nato from “the rise of totalitarian regimes around the world”.

The president attacks  Fauci after a television interview, adding that Americans are fed up with pandemic restrictions
World
9 months ago

Trump says he's prepared to raise the stimulus offer, and  ‘could quickly convince’ Republicans to back a ‘good’ deal
World
9 months ago