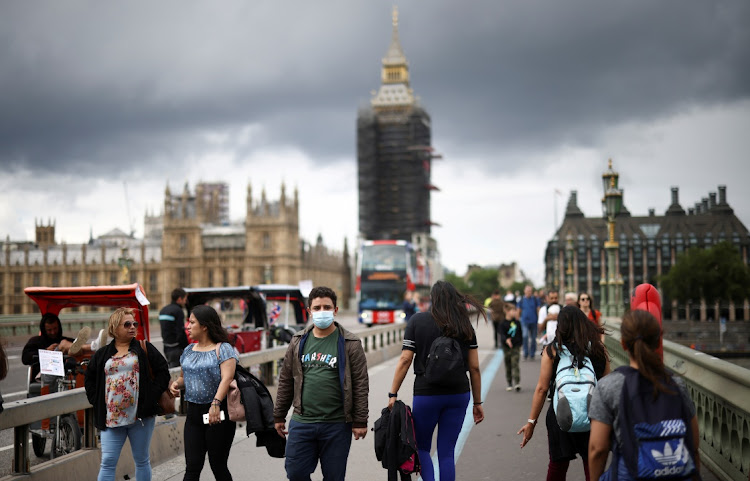 London — The UK government is set to issue guidance that people are “expected to” continue wearing masks in indoor, enclosed spaces even after coronavirus restrictions are lifted in England on July 19.

Though face coverings will no longer be mandatory in any setting, there will be an expectation for people “to wear masks indoors, in crowded places, on public transport”, vaccines minister Nadhim Zahawi told BBC TV on Sunday.

Health secretary Sajid Javid also ratcheted up the pressure, telling the Sunday Telegraph that people who did not wear masks in such settings were “just being irresponsible, they’re not playing their role as a responsible citizen”.

It was a change in tone from last week, when Prime Minister Boris Johnson told a news conference that guidance would “suggest where you might choose” to wear a mask, and signalled that it was fine to remove them “late at night in a virtually empty carriage on the main railway line”.

Johnson plans a speech this week ahead of what has been dubbed “Freedom Day”, as first reported by Bloomberg News on Friday. He will vow to tackle the social divisions heightened by 16 months of pandemic-related restrictions and pledge to create a more balanced economy.

The Labour Party has accused the government of sowing confusion. Kate Green, the shadow education secretary, said on Sky News on Sunday that masks should remain mandatory on public transport.

The new guidelines will be set out on Monday for individuals and businesses ahead of the expected July 19 reopening, Zahawi said. “I think the nation will come together and be cautious and responsible,” he told the BBC.

The government is expected to confirm that virtually all remaining Covid-19 curbs in England will be removed, allowing nightclubs to reopen and events to resume without capacity limits, among other things.

Even so, Susan Hopkins, Public Health England’s strategic director for Covid-19, told Times Radio on Sunday that she would “strongly advise” people continue to wear masks indoors and on public transport. She also advised people to continue working from home after July 19, if they can, until cases start falling again. That is despite the government planning to lift its “work from home” guidance on that date.

Officials cite the rapid vaccine rollout as a reason to end rules, with almost two-thirds of UK adults now double-vaccinated. But infections are rising fast, driven by the highly transmissible Delta variant, and Javid warned last week that cases could hit 100,000 a day, far above their peak from January.

The health chief believes lifting restrictions is the right move, however, partly because of the pandemic’s impact on hospital waiting lists in England. This could more than double to 13-million people in the coming months, he told the Sunday Telegraph.

Many people who need treatment, including for cancer checks and mental health problems, have stayed away for fear of catching the virus or because of a “very British” attitude of not wanting to overburden health-care workers, he said.

While cases have risen dramatically in the past month, lagging indicators such as hospital admissions and deaths have not followed at the same pace. Zahawi said the vaccine programme, focused first on the elderly and vulnerable, had weakened, not completely severed, the link between Covid infections and serious illness.

Zahawi dismissed a report in the Sunday Times that the recommended gap between first and second shots will be halved to four weeks in a bid to get ahead of the latest wave of cases.

The eight-week interval is the “best interval for the highest level of protection”, he told the BBC. Zahawi denied there was a shortage of the vaccines, saying the rollout had slowed down because “we need more people to come forward”.

After the rapid take-up of shots in the spring, the nation is into the “hard yards”, of needing to persuade those sceptical of vaccines and making sure people return for their second doses, he said.

From captain Harry Kane to Jordan Henderson and Raheem Sterling, players have taken a stand against prejudice
Opinion
2 weeks ago