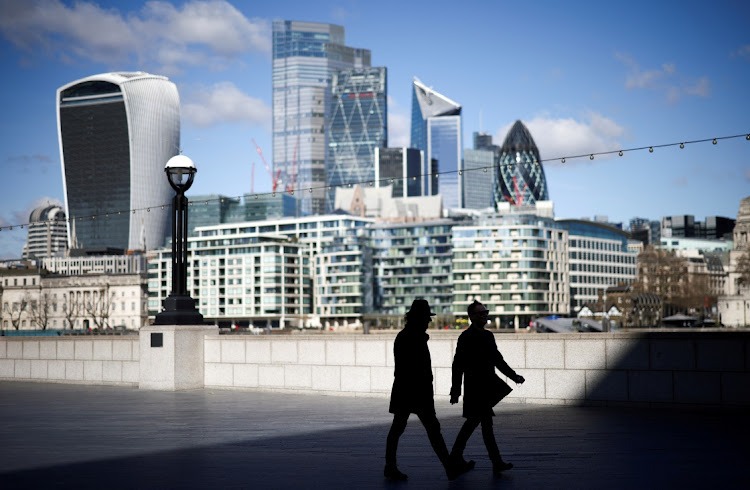 London — The City of London may remain a ghost town for a little longer yet.

JPMorgan Chase and Deutsche Bank have told staff that plans for a staged return to their UK offices are being delayed after Prime Minister Boris Johnson announced an extension of pandemic restrictions until July 19, according to people familiar with the matter

Both lenders had previously told UK staff they would be encouraging more of them to return from June 21, which the government had said in February would be the earliest time by which all lockdown restrictions would be lifted. That has now been pushed back to July 19 or whenever the government decides to remove all legal limits on social contact, though workers with business or personal reasons to come into the office can still do so, the people said.

Goldman Sachs is also reviewing its plans for a staged return from June 21, according to a person familiar with the matter. The delays mean that with the summer holiday season approaching it is possible that early September may be the first test of any widespread return to the office in the City of London.

The delay is a blow for the financial centre’s struggling businesses that used to serve 500,000 commuters daily. The influx has been a fraction of that for more than a year now and the pandemic-induced transition to remote work has led questions about the future of financial centres and the urban economies they underpin.

Foot traffic in the main London offices of Bank of America, Citigroup, Goldman Sachs, JPMorgan and Morgan Stanley, which have a substantial proportion of traders and investment bankers among their headcount, was estimated on average to be about a fifth of the pre-pandemic norm as of May 24, according to analysis by Orbital, which monitors activity levels through satellites and mobile phone data.

Traffic at British banks such as  HSBC and Standard Chartered, whose buildings have more staff focused on retail operations and head-office activities, was less than half that level, according to Orbital. Standard Chartered has moved to a flexible working model, while HSBC has said it is looking to cut office space by 40% in the long term. Retail-focused NatWest said it expected just 13% of its staff to work mostly from the office after the pandemic.

Even for those firms still betting on the office environment, any return to the office was set to be slow and uneven and June 21 wasn’t going to mark a wholesale return to normal.

At JPMorgan, for instance, it was the date from which a wider selection of teams could gradually bring people back while a continuing 50% limit on building capacity means rotating staff into the office is expected to be the norm for the foreseeable future. That remains the case for the proposed July 19 return.

But the rush of demand  is causing some problems too — not least because smaller towns are having to accommodate holidaymakers as well as new ...
Opinion
4 months ago

Office workers are unlikely to return en masse as Covid tests, masks and social distancing become the norm
World
4 months ago
Next Article