Divorce of Melinda and Bill Gates puts 90-year-old billionaire in an awkward position on the board, says academic 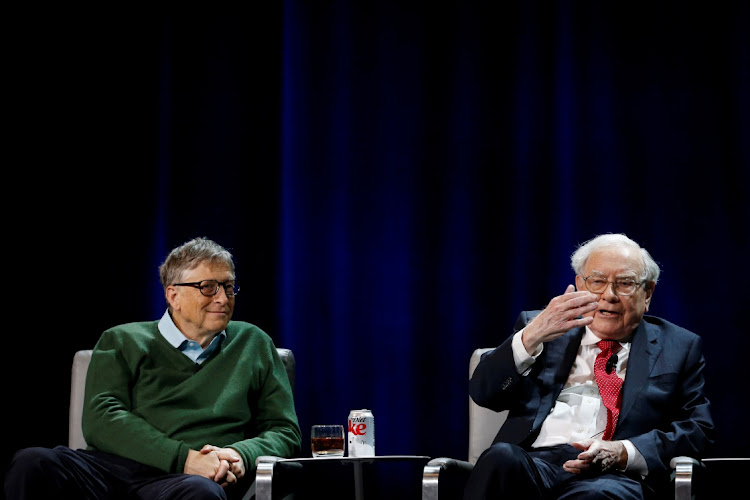 Warren Buffett, right,speaks while Bill Gates looks on at Columbia University in New York, US, in this January 27 2017 file photo. Picture: REUTERS/SHANNON STAPLETON

Warren Buffett has resigned as a trustee at the Bill and Melinda Gates Foundation as the charity grapples with upheaval created by the divorce of its namesake founders and as Buffett finds himself at the centre of controversy over the ultrawealthy and taxes.

“My goals are 100% in sync with those of the foundation,” Buffett, 90, said on Wednesday in a statement that also announced he had reached the halfway mark in giving all his Berkshire Hathaway shares to charity.

Buffett has contributed more than $27bn of his own money to the charity over the past 15 years. He is one of the Gates Foundation’s three board members, alongside Bill Gates and Melinda French Gates, who announced last month they are splitting after 27 years of marriage. Buffett did not mention the divorce as a reason for his resignation, while giving a broader statement about his philanthropic goals, taxes and dynastic wealth.

Buffett has faced criticism in recent weeks amid an investigation by ProPublica into how certain wealthy individuals, including the Berkshire chair and CEO, pay low tax rates relative to their fortunes. Buffett said that his $41bn of contributions to five foundations has produced only about 40c of tax savings per $1,000 given.

“That’s because I have relatively little income,” Buffett said in the statement. “My wealth remains almost entirely deployed in taxpaying businesses that I own through my Berkshire stockholdings, and Berkshire regularly reinvests earnings to further grow its output, employment and earnings. The income I receive from other assets allows me to live as I wish.”

He said it’s “fitting” for the US Congress to periodically revisit tax policy for charitable contributions, especially when certain donors become “imaginative”.

Buffett’s resignation from the Gates Foundation board marks another shift in the long-time partnership and friendship with Bill Gates.

Buffett and Gates frequently play bridge together and have travelled to places including China as part of a group. Gates previously served on Berkshire’s board, before announcing last year that he would step down from that post.

Berkshire’s CEO decided in 2006 to donate the bulk of his wealth to the Gates Foundation partly because the pair does a “much better job” at running those charity operations than Buffett says he could.

Gates has built the foundation into a powerhouse of charitable giving, in part due to his riches as the fourth-wealthiest person, with a $144.7bn fortune, according to the Bloomberg billionaires index.

Three trustees is an unusually small number for an organisation of its size. The Ford Foundation, which is about a fifth the size of the Gates Foundation, has 15 members on its board. The Rockefeller Foundation, at a 10th the size, has no fewer than 12 at any time.

The divorce put Buffett in an awkward position as tiebreaker for the two exes, said Greg Witkowski, a senior lecturer of non-profit management at Columbia University. “With only three board members, it does really put a lot of attention on Warren Buffett’s role in the middle of that,” Witkowski said soon after the divorce. “In an ideal set-up, they would have had more trustees.”

Mark Suzman, the foundation’s CEO, told employees last month that he is in talks to strengthen “the long-term sustainability and stability of the foundation”.

Suzman “is an outstanding recent selection who has my full support”, Buffett said in the statement.

Suzman said last month that no decisions have been made about what future steps need to be taken, but added that Bill Gates and Melinda French Gates have “reaffirmed their commitment to the foundation and continue to work together on behalf of our mission”.

Buffett has been pulling back on travel commitments in recent years, including stepping down from the Kraft Heinz board in 2018. The CEO still runs his sprawling conglomerate, which is valued at more than $634bn, but recently shared that Greg Abel, a vice-chair who oversees all of Berkshire’s noninsurance operations, is the top candidate to succeed him if he steps back.

In 2006, Buffett said he would distribute all of his shares of the company to charity. He said in Wednesday’s statement that his most recent $4.1bn distribution brought him halfway to that target.

“Please understand that these remarks are no swan song,” the billionaire investor said in the statement. “I still relish being on the field and carrying the ball. But I’m clearly playing in a game that, for me, has moved past the fourth quarter into overtime.”

Exorbitant fees in an age of corporate misadventure and trigger-happy lawyers are bad for shareholders, companies and insurers
Opinion
1 month ago

Bezos’s space company Blue Origin has auctioned off a seat aboard its New Shepard rocket and an as-yet-unidentified winner paid $28m, plus ...
Opinion
1 month ago

ProPublica cache of IRS information reveals how several of the world's wealthiest businessmen, including Jeff Bezos, Elon Musk  and Warren Buffett, ...
World
1 month ago
Next Article