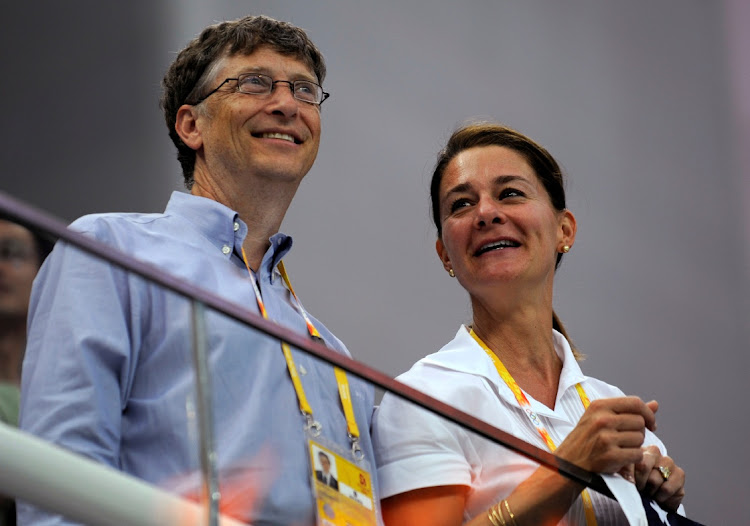 Bill and Melinda Gates watch the swimming events at the National Aquatics Center during the Beijing 2008 Olympic Games in Beijing, China, in this August 10 2008 file photo. Picture: REUTERS/KAI PFAFFENBACH

New York — As a married couple, Bill and Melinda Gates spent decades amassing one of history’s largest fortunes. Now they are divorcing, they have to untangle that $145bn.

Details of the split have already started to emerge.

Cascade Investment, a holding company Bill created with his Microsoft winnings, transferred securities worth more than $1.8bn to Melinda French Gates, according to US regulatory filings dated May 3. The shift comprised about $1.5bn of Canadian National Railway shares and more than $300m of AutoNation stock. Cascade holds securities of more than $50bn, including stakes in Deere & Co, Republic Services and Ecolab.

How their wealth is ultimately divvied up is set to shake up the uppermost ranks of the world’s richest people and could have billion-dollar implications on what philanthropic causes get attention. The couple oversee the world’s largest private foundation and have promised that most of their wealth will be donated.

In announcing the split, the couple said they will both remain involved in the Bill and Melinda Gates Foundation, which has contributed vast sums to the realms of global health, climate change policy and social issues. But the $50bn operation — with billions more still to be given — depends on the co-operation of two exes.

“As uncomfortable as it is, their personal relationship is going to have huge consequences for where the money goes,” said Benjamin Soskis, senior research associate at the Urban Institute’s Centre on Non-profit and Philanthropy. “The Gates Foundation is the most influential and important philanthropic organisation in the world, not only in terms of its assets and grantmaking. Bill and Melinda themselves have each become incredibly influential public figures in their own rights.”

The split, after 27 years of marriage, comes just two years after the 2019 separation announcement of Jeff Bezos and MacKenzie Scott, another billionaire tech couple in Washington state. That divorce led to a 75-25 division of the couple’s 16% stake in Amazon.com for Bezos and Scott, respectively.

As uncomfortable as it is, their personal relationship is going to have huge consequences for where the money goes

It made Scott the world’s fourth richest woman and rippled through the global philanthropic landscape as she became one of the most prolific donors of 2020, contributing to gender equality causes alongside Melinda.

The Gates fortune, at $145bn according to the Bloomberg billionaires index, could prove more complex to carve up than the Bezos assets, which were largely concentrated in Amazon stock.

The couple’s net worth originated with Bill’s stake in Microsoft, but shares of the softwaremaker now probably make up less than 20% of their assets. They have moved much of his holding into the Gates Foundation over the years and his exact stake has not been disclosed since he left Microsoft’s board last year.

The biggest asset is Cascade Investment, which is run by money manager Michael Larson. Through Cascade, Gates has interests in real estate, energy and hospitality. The biggest public position is agricultural-machinery maker Deere, with Cascade holding more than 10% of the stock valued at about $12bn, followed by an $11.8bn stake in waste-collection company Republic Services, Bloomberg data shows.

That is followed by Canadian National. Cascade transferred 14.1-million shares to Melinda, and still has 87.3-million shares, which are owned by Bill, this week’s regulatory filing shows.

Most of the portfolio comprises North American companies, but it also owns stock in Diageo, the world’s largest distiller, and London-based private-jet services firm Signature Aviation.

The couple are also among the largest landowners in the US and have homes including their 6,131m2 mansion in Medina, Washington.

The rapid stock transfer could be a sign that it has already been decided how the fortune will be split.

“I would imagine that almost everything is done,” said Jacqueline Newman, a divorce attorney and managing partner at Berkman Bottger Newman & Schein. “For them to issue this kind of statement, they have probably worked out 90-95% of the divorce. They’re not putting something like this out otherwise.”

The Gateses live in Washington, which is a community property state. Anything acquired during a marriage is thus considered to be equally owned by both partners. But that does not necessarily mean their fortune will be evenly split.

“It is not a mandatory 50-50,” said Janet George, a family lawyer in Washington with the firm McKinley Irvin. “The courts can award more or less, depending on what is just and equitable.”

Details of their division may never be publicly revealed because they are likely to be hidden behind the couple’s private contracts, George said. Their stakes in public companies that are large enough to have to report holdings will give a peek behind the curtain.

To the extent to which they have huge divergent interests that would arise, Buffett would play an important role

What the couple owns is one thing, but much of their focus over the past couple of decades has been on what to give away.

The foundation is one of the world’s largest private charitable foundations, having made almost $55bn in grant payments through the end of 2019. A former general manager at Microsoft, Melinda helps drive strategy at the organisation, with a particular focus on gender equity. Bill has been more focused on the science and global health side of their giving.

Both Bill and Melinda “were not just behind-the-scenes players. They were decisionmakers,” said Soskis of the Urban Institute, whose own work has been supported by the Gates Foundation.

In cases in which a wealthy philanthropic couple splits up, their foundations are sometimes divided as well, said Mela Garber, a tax principal at the accounting and advisory firm Anchin in New York who specialises in matrimonial matters.

Even when divorces are amicable, Garber said, “they might not want to be together at certain meetings and fundraising, and have the same level of involvement with people around”. The complexities of two exes working together can become clearer as time goes on, she said. “Creating two new foundations eliminates a huge area of tension.”

Splitting the Gates Foundation is difficult for many philanthropic experts to imagine. However, “they could pursue separate goals within the confines of the foundation itself”, said Brian Mittendorf, an Ohio State University professor who studies non-profit.

Already a household name thanks to his previous status as the world’s richest man, Bill became even more famous when he emerged as a go-to expert on the pandemic while official guidance was often confusing and contradictory. His work has made him a target of conspiracy theories as well as controversies over patents and how to open up global access to the vaccines.

For her part, Melinda has raised her own profile with the publication of a book, The Moment of Lift: How Empowering Women Changes the World, in 2019. She has in recent years helped shift the foundation’s strategy, as a “top-down, technocratic” approach to giving has become more responsive to “community needs and community input”, Soskis said.

Despite its size, the Gates Foundation’s board only has three members: Bill, Melinda, and Warren Buffett — who has promised to devote the bulk of his own considerable fortune to his friends’ foundation. That means disagreements between the two exes may need to be settled by the 90-year-old billionaire.

“To the extent to which they have huge divergent interests that would arise, Buffett would play an important role,” Ohio State University’s Mittendorf said.

The pair could also pursue their separate interests outside the foundation, in their investments and personal philanthropy. Bill Gates, for example, founded Breakthrough Energy Ventures, a fund that fights climate change by investing in start-ups with the potential to cut global annual emissions by as much as 500-million tonnes each year. Other backers include Bezos and Michael R Bloomberg, founder of Bloomberg.

In 2015, Melinda started Pivotal Ventures, an investment and incubation company, “as a separate, independent organisation to identify, help develop and implement innovative solutions to problems affecting US women and families”.

In 2019, Melinda committed $1bn to speed up the pace at which women gained power and influence in the US. A year later, Pivotal announced it would be partnering with MacKenzie Scott to start the Equality Can’t Wait Challenge, a $30m award to organisations that come up with ways to advance women’s power by 2030.

The wealth of the chair of Berkshire Hathaway this week jumped to $100.4bn, according to the latest Bloomberg billionaires index
Business
7 months ago

Gates Foundation to add $250m more to fight against Covid-19

Gates Foundation to add $250m more to fight against Covid-19