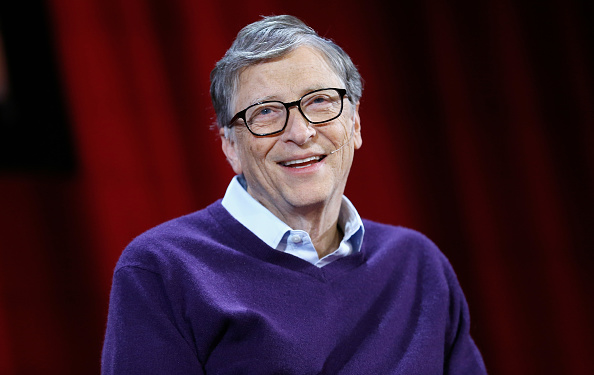 Los Angeles — Before all the revelations about his divorce, dubious workplace behaviour and ties to Jeffrey Epstein, Bill Gates was just America’s huggable billionaire techno-philanthropist.

Sure, he had accumulated absurd riches from cofounding Microsoft and lived in a $130m mansion with an indoor trampoline room. But he was also known to drive his children to school, binge Modern Family, dress like Ned Flanders and wait in line for his favourite cheeseburgers.

Over the past two decades, Gates trampolined off his and his wife Melinda’s vast charitable efforts to another stratosphere of societal influence. He became arguably the leading business voice on fixing the world’s woes, as comfy pontificating about eradicating disease and improving education systems on the Ellen DeGeneres Show as he was advocating for climate change and Covid-19 solutions on Fox News.

That populist persona popped on May 3, when Bill and Melinda French Gates announced they were splitting up after 27 years of marriage. Unflattering particulars quickly emerged, including reports that Bill had an extramarital affair and pursued other office romances with employees at Microsoft and the humanitarian foundation that carries their names.

In a divorce filing, Melinda said their relationship was “irretrievably broken.” The question now is whether Bill’s reputation is, too.

His 2015 TED Talk racked up tens of millions of views, his occasional book recommendations were greeted like Oprah endorsements, and it wasn’t too long before Barack Obama awarded him the Presidential Medal of Freedom.

It’s easy to forget Gates wasn’t always so publicly revered. During the heyday of the PC revolution, he was the ruthless nerd-turned-tycoon who brutally and profanely berated underlings and allegedly tried to slash Microsoft cofounder Paul Allen’s equity in the company while he was undergoing cancer treatment in the early 1980s. (Gates has said his recollection of events differed from Allen’s.)

Windows software, his flagship creation, was a buggy mess that frustrated millions of consumers, and Steve Jobs groused that Gates and his team showed “no shame” and “no taste” in ripping off Apple’s products. Even the judge who oversaw Microsoft’s crippling turn-of-the-century monopoly trial said Gates had “a Napoleonic concept of himself and his company, an arrogance that derives from power and unalloyed success”.

By the 2000s, though, the world’s richest man seemed to have realised he had to change this Redmond-robber-baron narrative — and that his wealth could help.

He stepped down as Microsoft’s CEO and shifted his attention to what would become the Bill and Melinda Gates Foundation, which eventually gave away more than $50bn to fight malaria and Aids and boost childhood vaccination rates, earning the couple widespread praise, not to mention Time’s 2005 “persons of the year” cover with U2’s Bono.

Less than a decade after Microsoft’s antitrust trial, Gates was making the rounds on Capitol Hill advising legislators on US technology competitiveness and health initiatives.

“I was lucky enough in my Microsoft work to accumulate an ownership that was worth a lot of money,” he told Charlie Rose in 2008, shortly after switching to full-time focus on his giving pledges. “Warren [Buffett] likes to call that ‘claim cheques’ on society, where you get to say, you know, have a thousand people go build a pyramid for you or do whatever you want.”

His and Melinda’s annual foundation letters grew more popular than Microsoft product launches (albeit a low bar). Media scrutiny mostly vanished, replaced by perpetual guest-editor spots at publications lusting after Bill’s world-changing ideas. His 2015 TED Talk racked up tens of millions of views, his occasional book recommendations were greeted like Oprah endorsements, and it wasn’t too long before Barack Obama awarded him the Presidential Medal of Freedom. 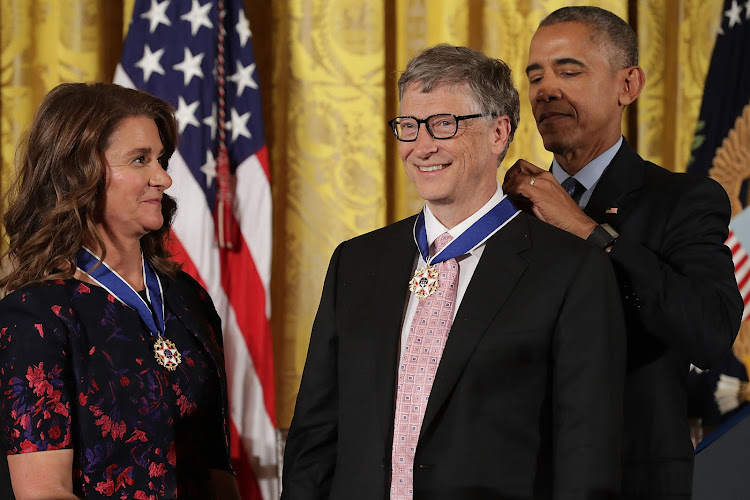 Then president Barack Obama awards the Presidential Medal of Freedom to Bill and Melinda Gates in 2016 for the work they have done to promote health and fight poverty. Picture: CHIP SOMODEVILLA/GETTY IMAGES

This was more than superficial fame. Gates’s civic clout could sway the discourse on critical and controversial issues (only recently he lobbied to keep Covid-19 vaccine patent protections in place), an influence that has threatened as more lurid details surface from his divorce proceedings.

That is not to suggest NGOs and non-profit will stop taking his money. But, as sceptics have noted, if he has sought inappropriate relationships with female employees, the foundation that bears his name is probably no longer the ideal advocate for women’s empowerment.

If he became too close years ago with Jeffrey Epstein, even after Epstein had pleaded guilty to soliciting prostitution from a minor, Gates is not the right leader to campaign against sex trafficking. It’s not so much that he is at risk of being “cancelled” altogether as he is from being Ctrl-Alt-Deleted from his perch atop the moral high ground.

A spokesperson for Gates said that the “rumours and speculation surrounding Gates’s divorce are becoming increasingly absurd”, and that “the claim of mistreatment of employees is false”. The representative added: “Claims that Gates had any personal conversations with Epstein in these meetings, which were about philanthropy, are simply not true.”

This was also supposed to be a year of focus on climate change for Gates, with the billionaire raising a call to arms via the February launch of his book, How to Avoid a Climate Disaster, and rallying global leaders and regular consumers to invest in green-tech research, fix carbon regulations and buy more electric cars and less meat. Instead, he got a few months of book touring before the world’s eyes darted to his divorce.

Another consequence may be that Gates’s personal brand, his billionaire-of-the-people shtick, will invite a tough reappraisal. Essential to his bespectacled, do-gooder charm was that it felt authentic and accessible.

A 2019 Netflix docuseries even sought to take viewers Inside Bill’s Brain. Released just a month before Melinda purportedly began consulting with divorce lawyers, the glowing three-part ode to Bill’s folksy genius presents him as a devout partner who guzzles Diet Cokes and is incessantly scratching his messy hair over how to save the world.

Now, however, the show only serves as a jarring reminder of how much engineering went into the overhaul of Bill’s persona, especially as contradictory evidence — such as his apparent habit of being dismissive of his wife in meetings — comes to light.

Asked in one episode of the series whether Melinda ever called him out on “his shit”, Bill gave an answer that has lost its endearing awkwardness in retrospect. “A lot of it, sure. I hope she doesn’t know all of it,” he said, laughing. “No, I’m just kidding.”

It’s not so much that he’s at risk of being ‘cancelled’ altogether as he is from being Ctrl-Alt-Deleted from his perch atop the moral high ground.

In 2017, in his foreword to Microsoft CEO Satya Nadella’s autobiography Hit Refresh, Gates wrote of the importance of legacy. “As the title of this book implies, [Satya] didn’t completely break with the past — when you hit refresh on your browser, some of what’s on the page stays the same.”

His point was that as much as Microsoft had reinvented itself in the many years since Gates ran the software giant, its source code still retained parts of his DNA. The same could be said for the broader technology landscape. Gates had reinvented himself as a philanthropist, yet he also remained a legend among start-up cofounders and unicorn CEOs, a statesman in Silicon Valley at a time when many of its once-mythologised leaders are deceased, disappeared or disgraced.

Gates, who stayed on Microsoft’s board until last year, was both an inspiration for top execs — “I knew that part of rediscovering the company’s soul was to bring Bill back, to engage him more deeply in the technical vision for our products and services,” Nadella has written — and a rare voice of reason in a tech industry.

But since the Wall Street Journal reported that some of Microsoft’s directors wanted him to step down in 2020 due to an investigation into a decades-old office fling (a spokesperson for Gates said the relationship ended amicably and that his resignation had nothing to do with the affair), will the rest of big tech want to hit refresh again on Gates’s involvement too?

For years, he was respected enough to smack around techies usually indifferent to outside criticism. Before it was cool, Gates chided the Valley for neglecting thorny societal problems in favour of building apps and gizmos. (“When you’re dying of malaria, I suppose you’ll look up and see that balloon, and I’m not sure how it’ll help you,” he once cracked, referring to Google’s internet-beaming Project Loon.)

He has tried to temper the arrogance of Facebook CEO Mark Zuckerberg, who inherited the mantle of most-loathed geek, and, last summer, chastised Elon Musk for speaking out of school about the pandemic.

With an asterisk on Gates’s appeal now, it is likely his ubiquity of tech activism will be less meaningful. Musk, for one, already writes off Gates’s taunts. “Billy G is not my lover,” Musk tweeted in July. Imagine what Tesla’s Memelord will resort to if Gates picks another fight with him amid his tabloid-worthy scandals.

Meanwhile, Microsoft’s redemption story is strong enough under Nadella that Gates’s soul is not required any more. If anything, it seems more likely that near-term corporate events will feature cameos not from Gates but Steve Ballmer, his once-maligned CEO successor who has since turned into the loveable-goofball owner of the Los Angeles Clippers.

Gates has long bristled at questions about his legacy. He has sworn he has never had “some end-of-life goal”, and has called self-memorialising “a stupid thing”. For a 65-year-old who listens to history lectures on the treadmill and owns Leonardo da Vinci’s journals, it is not quite believable that Gates has not reflected on how future generations will look back at his life’s work.

But as he said in 2005, as his second act was just taking off, “It doesn’t matter; it doesn’t motivate me. If we’re all forgotten or remembered, it doesn’t change what we do every day.”