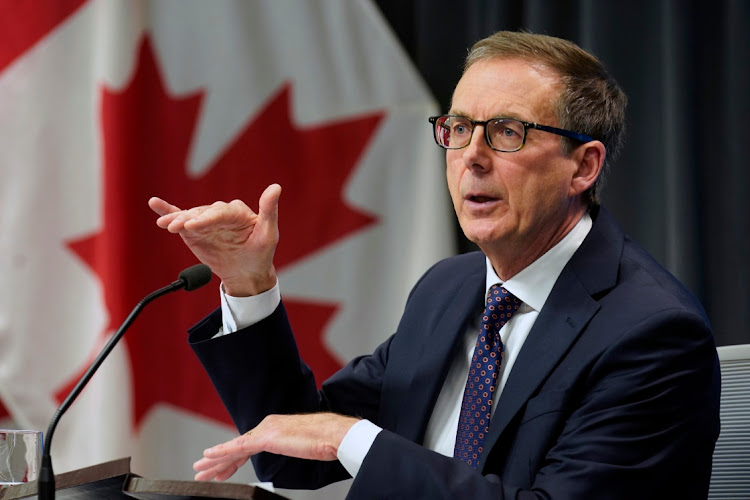 Ottawa  — The Bank of Canada signalled on Wednesday it could hike interest rates three months sooner than previously forecast and warned that inflation would stay above target for much of 2022, amid a global supply crunch.

“The Canadian economy is once again growing robustly,” it said in its quarterly monetary policy report. “The Bank now expects economic slack will be absorbed sometime in the middle quarters of 2022.”

It added that this timing was “more uncertain than usual”, due to the challenges of reopening an economy still affected by Covid-19.

Bank governor Tiff Macklem said at the media conference: “We took an important step today, we ended quantitative easing. We’ve also … indicated in our new forecast, that we now expect slack to be absorbed sooner. And that signals that we will be considering raising interest rates sooner than we previously thought. So interest rates don’t need to be as low for as long to get that full recovery and to get inflation back.”

“There’s really no need for an ultra-stimulative monetary policy at this point,” said Doug Porter, chief economist for BMO Capital Markets. “We now expect them to start raising rates in July of next year, and we would look for hikes of a quarter point per calendar quarter.”

The Bank had previously forecast a full recovery would happen sometime in the second half of 2022 and that it would keep rates at current levels until that happened.

But slower growth coupled with supply-chain disruptions suggest the output gap is narrower than previously thought, the bank said. On Wednesday, the central bank cut Canada’s economic growth outlook this year to 5.1% from 6% in its July forecast.

“These upward revisions reflect the larger and more lasting impacts from supply constraints as well as higher energy prices,” it said.

Those supply-chain bottlenecks should be largely resolved by the end of next year, it said. Strong foreign demand is set to drive a solid export recovery, while business investment outside of the oil and gas sector should rise as supply constraints ease.

The Bank said the bond-buying programme that was used to stem the economic fallout of the coronavirus pandemic will now move into the reinvestment phase, where it will purchase only enough Canadian government bonds to replace those that are maturing.

Bond-buying will end on November 1 and the target range for total purchases will initially be between C$4bn and C$5bn per month.

“I really want to disabuse you of the idea that there is any sort of direct effect between bond buying and inflation. Bond buying is part of a package of monetary policy tools we use to lower interest rates. That's important to supporting the recovery and it's working very effectively.”

SA’s economy, which slumped 6.4% and lost more than 1-million jobs in the wake of the Covid-19 outbreak, has got a breather from a surge in commodity ...
Economy
6 months ago

PETER LITTLE: What’s up and what’s down in major economies as the pandemic lifts

PETER LITTLE: What’s up and what’s down in major economies as the pandemic lifts