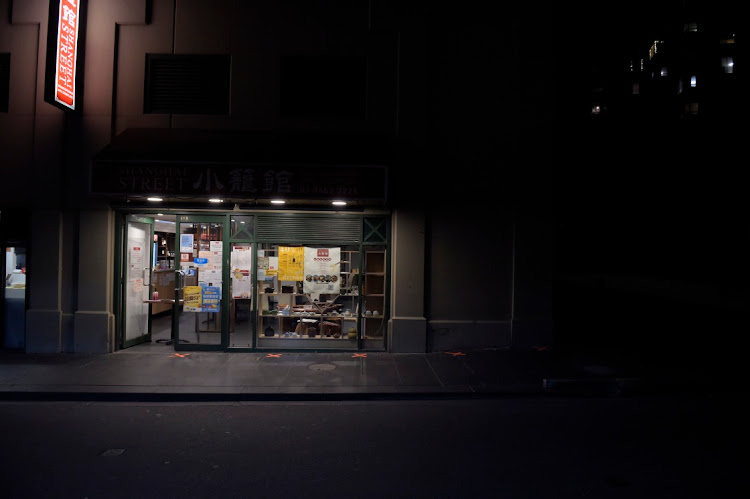 A restaurant in Chinatown remains open for take away food only in Melbourne, Australia, on Wednesday, July 8, 2020. Picture: BLOOMBERG/CARLA GOTTGENS

Beijing/Sydney — Flare-ups from Australia to Japan show the world has not learnt an early lesson from the coronavirus crisis: to stop the spread, those with mild or symptom-free coronavirus infections must be forced to isolate, both from their communities and family.

In Australia, where Victoria state has been reporting record deaths, about 3,000 checks in July on people who should have been isolating at home found 800 were out and about. In Japan, where the virus has roared back, people are staying home but are not in isolation: 40% of elderly patients are getting sick from family members in the same apartments.

The failure to effectively manage contagious people with mild or no symptoms is a driving factor behind some of the world’s worst resurgences. But lessons from Italy, South Korea and others that have successfully contained large-scale outbreaks show that there is a tried-and-tested approach to cutting off transmission: move them out of their homes into centralised facilities while they get over their infections, which usually does not require longer than a few weeks.

“A laissez-faire approach naively trusting everyone to be responsible has been shown to be ineffective, as there will always be a proportion who will breach the terms of the isolation,” said Jeremy Lim, adjunct professor at the National University of Singapore’s Saw Swee Hock School of Public Health.

Faced with a new cluster this week after 102 days without a locally transmitted case, New Zealand has quickly enacted this strategy, placing about 30 people — including at least two children below the age of 10 — into centralised quarantine.

But other countries facing sustained spread such as Australia and the US are not broadly enacting the policy despite its proven track record. Their unwillingness — or inability — to do so underscores the challenges faced by liberal democracies whose populations are less likely to tolerate measures that require individual sacrifice for the greater good.

The existence of a large group of carriers who hardly feel sick is a unique feature of the coronavirus crisis, and a major factor that has driven its rapid spread across the globe. Unlike in previous outbreaks such as the 2003 SARS epidemic, many infected people do not feel ill enough to stay home, and so spread the pathogen widely as they go about their daily lives.

The US Centers for Disease Control and Prevention has estimated that 40% of Covid-19 infections are asymptomatic.

In Wuhan, the Chinese city where the coronavirus first emerged in 2019, mildly sick patients were originally turned away from hospitals and told to rest at home, given that the overwhelmed health-care system needed to tend to the most severe cases. But health experts soon found that these people would infect their family members and others as they moved around in the community, precipitating a deluge of cases.

Bringing mild or asymptomatic patients to designated facilities — repurposed convention centres, hotels and stadiums — for basic medical care marked a turning point in the city’s fight against the coronavirus. Simply separating them from healthy people halted the pathogen’s silent spread through the community.

The strategy has since been used in Italy, Singapore and South Korea at the height of their own coronavirus outbreaks earlier this year. Faced with a resurgence last month, Hong Kong converted an exhibition center to accommodate mild Covid-19 patients and is building more such facilities.

In New Zealand, the government put “a lot of thought” into enacting the policy, and is asking family members of confirmed cases to go into centralised quarantine with them if they require care, said director-general of health Ashley Bloomfield.

The approach is effective firstly because it prevents people from infecting family members in the same household — more than 80% of cluster infections in China cities were in households after mild patients were allowed to stay home, said a Lancet study. In Europe, the surge of household infections drove Italy’s Milan to start putting such cases in hotels, enabling the country to gain control over its outbreak in early May.

Beyond household spread, the strategy is necessitated by a facet of human nature that has been seen time and again across countries and cultures: left to their own devices, some people will not follow the rules.

In Australia and Japan, infected people who have been told to stay home have gone out for a variety of reasons — some cannot work from home and need the income, while others want to pick up groceries and supplies. One woman in Tokyo travelled cross country by bus after having her infection confirmed.

“It is far better to be more aggressive in the short term with even mild cases than it is to allow such cases to slip under the radar,” said Nicholas Thomas, associate professor in health security at the City University of Hong Kong.

But forcibly moving mild or asymptomatic patients into centralised facilities has been met with backlash in some countries where citizens are not as accepting of government directives. Some people might lose their jobs if they disappear for two weeks, or have caretaking responsibilities for young children or older parents where it is unfeasible to be separated.

“People would be wondering what on earth they’re doing locked up in a hospital,” said Stephen Leeder, emeritus professor of public health and community medicine at the University of Sydney. “From what I know about the Australian psyche, I don’t think it would go down all that well.”

In places such as Venezuela and India where conditions in quarantine facilities are poor, the prospect of being taken away has caused some to avoid being tested or to lie to contact-tracers for fear of being found positive, making the work of health officials more challenging.

In an e-mailed response to Bloomberg News queries, the department of health and human services in Victoria said the government provides alternative accommodation for quarantine, but that these are for health workers “who may not be able to safely live at their normal address” and other vulnerable groups.

Rather than forcing isolation on mild cases, authorities have locked down 5-million residents in Melbourne and are tightening restrictions until new cases come under control.

Officials are using a combination of stepped-up checks and fines of A$4,957 to convince infected people to stay home, while repeat offenders risk a A$20,000 penalty in court. More than 500 military personnel are helping the police conduct checks on 4,000 households every day to ensure those who are supposed to be staying home are there.

To be sure, aggressive and thorough contact-tracing and case follow-up have successfully contained outbreaks in countries such as Germany without a centralised quarantine strategy. But these places relied on an army of efficient workers hunting down every chain of transmission, a resource not many governments have had time to build up.

“The classic practice in public health is to identify, trace and quarantine,” said Yang Gonghuan, former deputy director of the Chinese Center for Disease Control and Prevention. “But how that is carried out depends on popular sentiment and the country’s resources.”

Why don’t some people play by the rules, even during a pandemic?

Behavioural scientists say rule-breaking is being worsened in the Covid-19 pandemic by cultural, demographic and psychological factors
World
11 months ago

It is far too early to hope for a speedy return to our old way of life. What happens next really depends on how you and I react to these early ...
Opinion
11 months ago
Next Article