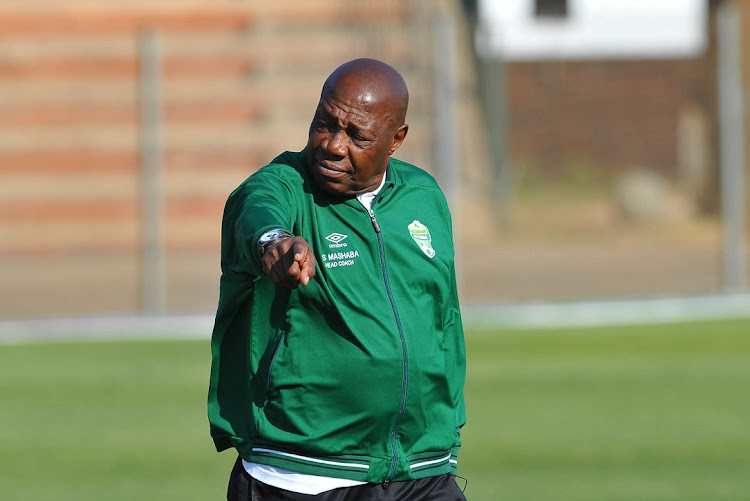 Mashaba, among the most successful Bafana coaches and the first one to take the SA Under-23 team to their first Olympic Games in 2000, attended Ledwaba’s presidential launch in Johannesburg on Tuesday. He was unflinching when he committed to support change and Ledwaba’s candidacy against incumbent Danny Jordaan.

Safa vice-president Ledwaba could not attend the event after she was warned by the national association not to address the media until all the candidates were cleared by the governance committee for next month’s Safa election.

Mashaba characteristically did not mince his words.

"As the lawyer I advised my client Ria Ledwaba not come and address you for her candidacy not be expelled. This is to avoid us going up and down in court, but to focus on the campaign at the right time" - Adv Leruma Thobejane of Botha Massyn and Thobejane attorneys.#SNAWA pic.twitter.com/FsYifC2JZY

“I am one of the staunchest supporters of this campaign. It’s not that we hate some people. No, it is because we have stagnated as a football nation and we are not progressing,” he said.

“How does a president [Jordaan] talk to you about football systems when he did not play football? That’s why we are having problems. It tells you something that technicians are being told how to do things.

“Whoever takes over, we want to see a new approach. It is 26 years since we won the Africa Cup of Nations and we are always going down. If we were at the same level, maybe it would be better.

“Ria knows it all. She once had a football team [Ria Stars] and she understands the terms of football.

“How are you in your rightful mind, lambasting a legend who is being respected in England and honoured. And that’s not done in SA” ~ @BafanaBafana legend @DK15_official on how @LucasRadebe has been treated locally.@SPORTATSABC #SABCSport411 pic.twitter.com/oJUxOMtaG5

“She knows what is happening and what is needed. She listened to what [ex-Banyana Banyana star] Portia Modise was saying about the association,” Mashaba said.

“You do not deal with people by giving them a cold attitude. Listen to them as well, to what they are saying, and as you go along things will be better. It’s good for people to say they need new young blood. But what would the young people bring, because it is all about experience.

“In the technical committee that supports the coach, you do not need young people. You need people who have seen it all.

The house is full and Ria Ledwaba cannot address the media otherwise she will be expelled by SAFA 😭 pic.twitter.com/ITF8NE7T6n

“My answer is that we were never given an opportunity. I am not praising myself, but a person like myself, Lucas Radebe or Screamer Tshabalala, Doctor Khumalo should be in the Safa technical committee.”

Mashaba was fired during his third stint as SA coach in 2016 after an outburst on the pitch he directed at Jordaan in full glare of TV cameras. Bafana had just beaten Senegal 2-1 in a 2018 World Cup qualifier in Polokwane and he shouted that “the Safa president did not support me when I needed support the most during the most trying times”.

The incident embarrassed Jordaan, and Mashaba was dismissed.

Modise, former Bafana star Khumalo, Netball SA president Cecilia Molokwane and former Safa CEO Dennis Mumble were among those present at Ledwaba’s launch in Houghton to back her candidacy.