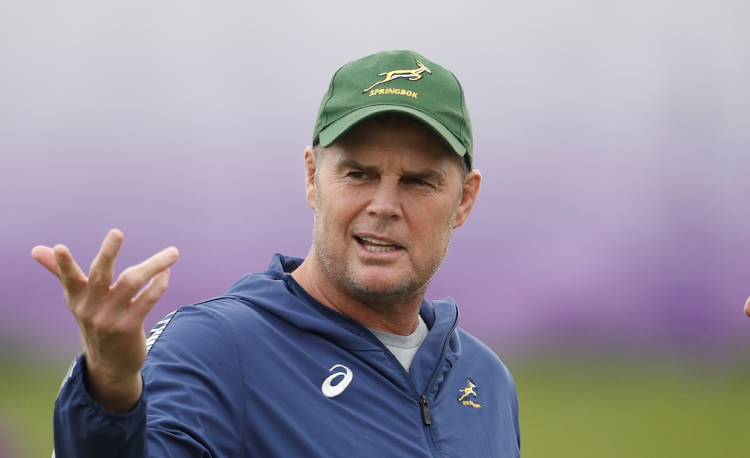 World Rugby has moved to limit on-field coaching, controversially employed by SA against the British & Irish Lions in 2021, by approving trials to limit non-playing personnel entering the field during a match.

SA’s director of rugby, Rassie Erasmus, donned a tracksuit and water carriers’ bib and frequently ran on to the pitch with a tray of drinks as cover to pass instructions to his players as the Springboks took a narrow series win.

He was ridiculed by his opposite number, Warren Gatland, but insisted he was operating within the rules.

But on Tuesday, World Rugby moved to stop head coaches or directors of rugby from using the cover of water carriers to coach inside the field by approving a global trial, starting from July 1.

It said it was aimed “to improve the flow of matches by reducing unnecessary stoppages without compromising welfare”.

There will be revised protocol for when medics and water carriers can access the field, limiting the ability to interact with the match officials, and providing for sanctions “for any action that either interferes with play or is against the values of the sport”.

The proposed new rules mean medics will be allowed to provide water only to players they are treating and will give away a penalty if they field or touch a ball when it is live in play.

Teams will be permitted up to two dedicated water carriers, and in elite-level rugby, they will only be able to enter the field of play twice per half at points agreed with the match officials.

A person bringing on a kicking tee may carry one bottle for the kicker’s use only.

World Rugby also said “no-one should approach, address or aim comments at the match officials, save for medics in respect of treatment of a player. Should this happen, the sanction will be a penalty kick”.

The trial follows an extensive review, including research into player hydration needs, and increasing disruption to play caused by multiple water carriers entering the field of play every time there is a stoppage.

KEVIN MCCALLUM: Francly, French euros denied us a glorious 1995 in 2023

SA should have been chosen to host the Rugby World Cup, but bigger purses prevailed
Opinion
1 month ago