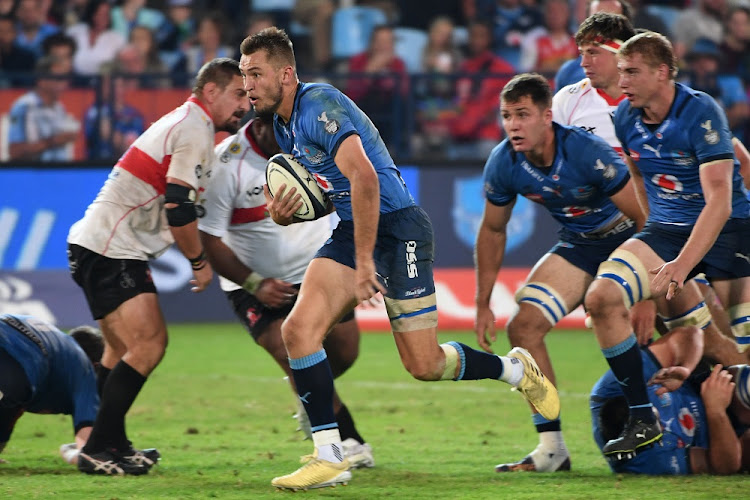 Richard Kriel of the Bulls during the Currie Cup match between Bulls and Lions at Loftus Versfeld in Pretoria, May 14 2022. Picture: LEE WARREN/GALLO IMAGES

Blue Bulls director of rugby Jake White called their 43-37 Currie Cup win at Loftus over the Lions “special” and the most meaningful victory since his arrival at the franchise.

White will have reason to crow after his young bucks downed what was effectively the best the Lions could throw at them in the form of their URC (United Rugby Championship) team.

The Lions’ decision to unleash their URC team backfired as the Blue Bulls inflicted on them an unprecedented 10th straight defeat in the Currie Cup.

While the result would have given the Lions much to think about before their last URC clash against the Dragons in Newport next weekend‚ it would have emboldened the Bulls who went back to the top of the standings.

It would have given them comforting reassurances of the depth in their system. Willem Strauss‚ the Blue Bulls’ president‚ pointed out that 12 of the 23 players who represented the team against the Lions had played for their clubs the previous week.

“When they got the opportunity tonight [Saturday] they were match fit‚ sharp and especially hungry to perform at a higher level. Our initiatives keep us ahead of our competitors‚” said Strauss.

They certainly took the fight to the Lions early on‚ but the match built to a thrilling climax as the Lions staged a spirited second-half comeback. They looked a beaten side in the first half‚ however‚ as the Bulls surged into a 35-17 lead by the break.

Twice the Lions were down to 14-men in the first half‚ but the Bulls would later also fall on the wrong side of the referee‚ allowing the visitors back into the game.

Sibusiso Sangweni’s converted try with less than 10 minutes to go got the Lions within four points before flyhalf Jordan Hendrikse banged over a long-range penalty to get the visitors within a point.

With three minutes to go‚ the Bulls’ David Kriel slipped through a gap and though the move broke down close to the Lions’ try line‚ the visitors made a meal of exiting their goal area. Captain Burger Odendaal‚ who was hurriedly put in possession‚ was also pressed into a quick release‚ but he only found the grateful hands of Richard Kriel who simply had to fall to the ground to complete a bizarre try to secure the win.

Odendaal fell to the ground in despair as his team suffered another severe reputational knock. The Lions might argue deploying their URC players was more aimed at preparing them for next weekend’s clash in Wales than breaking their Currie Cup duck‚ but it is a defeat that has to sting.

Madosh Tambwe has no visa issue and will join French team, agent says

Reports that his application was rejected are wrong, his representative says
Sport
1 month ago