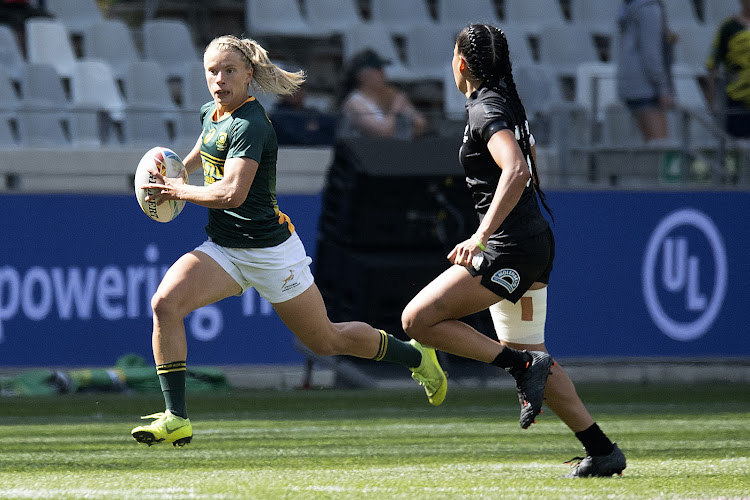 Springbok rugby sevens ace Nadine Roos is used to tackling everything that life throws at her, both on and off the field of play.

That’s because she was truly born into life’s “school of hard knocks”.

Abandoned by her mother at a preschool creché in Pretoria, Roos, who turned 26 this week, was raised solely by her grandmother before maturing into the strong and confident woman she is now.

“Growing up was most certainly not ‘sonskyn en rose’ [sunshine and roses],” she says from Stellenbosch where she’s based with the national women’s side.

“When my mom never came back to fetch me, my aunt wanted to put me into the welfare system. My gran came down from Polokwane and said, ‘No way, she’s coming home with me’.”

So young Roos learnt to stand on her own feet, with gran, a hairdresser by trade, at her side and she went through primary and high school and then on to Pretoria University.

“I played all sports at primary school and then mainly netball and athletics [hurdles] at high school.”

Her hurdling skill saw her get a bursary at Tukkies and she is now the proud bearer of a BCom degree — to go proudly with her national rugby colours.

“Sevens rugby found me, not the other way around,” she laughs.

“In 2015 the Tuks sevens coach approached me for a training session, which I enjoyed, and I phoned my ouma to say I’d give it a go ...  she was worried I may be injured but I told her that every sport has an injury risk.”

A month later she was part of the Tuks team that went to France, later in the year she made the Bulls Sevens team and was first recognised and roped in by the national coaches.

“What attracts me most is the speed, accuracy and the space you get in sevens rugby ... it tests your abilities in so many ways but is still fun to both play and watch.”

Even after becoming an adult, Roos found her resilience being tested. “I remember seeing my dad only twice. Once, I lent him a large sum of money ... but he never repaid me, landing me in huge debt, until this day,” she laments.

But a passionate Roos rises to the bait when the question of comparison between the fabulously successful national men’s Blitzbok sevens brand and the female equivalent is mentioned.

“A lot of people still look down on women’s rugby but it’s just so different to the men’s game — not even comparable.

“We don’t have structures in schools, most of the girls start playing rugby only at 18-19. There are virtually no youth structures, and women don’t have the big annual schools youth tournaments where teenagers are first noticed by the talent scouts.

“Our women’s premier division events don’t get televised live. It takes individual women in the team long to get noticed and then the processes we go through are made aware. But people must remember that the women work for exactly the same length of time, and put in the same effort at being the best player possible as the men do.”

And the financial rewards between the genders are a gaping chasm.

“It’s scary how underpaid we are compared to men ...  not only the sevens players but even the average men’s Currie Cup players earn more than the national women’s players, it’s a totally different ball game.”

She says that finding funding for the women’s game is vital. “If SA wants to see us winning things like World Cup and Commonwealth Games titles we need proper funding to raise standards and make things more professional.

“Women’s rugby must also start from way earlier, like introducing rugby at girls schools, even if it’s just touch rugby with no contact, it needs to be boosted at university level too so that skills sets are built early on — but again, that takes finances.”

The national women’s sevens side have just qualified for the Commonwealth Games in Birmingham, England and Roos will be looking to reverse her memories of the 2018 version in Gold Coast.

“We went to Gold Coast on the back of failing to qualify for the World Series for a second year running, and were just not in a good mental space and did very badly. So, personally, I’m looking forward to going to Birmingham, hoping to improve our 2018 experience and proud to be part of the bigger SA team in Birmingham.”

Off field and she’s also striding her own path. “Last year an opportunity came up through the Oakberry company, selling superfruit smoothies based on the Acai berry from Brazil, so that’s something I’m very excited about.”

Barring her beloved grandma, she may be short of a traditional family structure but right now, Roos has taken root in the welcoming embrace of the women’s sevens family set-up — and continues to blossom.

That sevens family includes coach Paul Delport, who comes across as a dad-like figure when he describes her. “I don’t think I’ve met anyone with a better work ethic ... she has an unwavering belief in herself and it’s not aspirational, it’s inspirational. She’s never scared to go into uncharted territory in whatever she does ...  she’s multitalented.”

And he agrees with his charge that the perception of women’s rugby needs to change. “We need to break down barriers. I’m so passionate in this regard. Perhaps we even need to go so far as to let our boys and girls play rugby together before puberty just to learn the basic skills and then take it from there.

“We’re way, way behind the top countries right now but the fact that we’ve got a new high performance manager [Lynne Cantwell] is encouraging. She’s been fantastic in her influence and ability to have a look at our structures and to push a plan through to try to improve things.”